Apple shares are poised to rally into the last week of May, after having closed higher in six out of the past  seven weeks. The shares have substantially rebounded following a March swoon, where they lost 35 per cent. Since hitting a low on March 23, 2020, Apple’s share price has rebounded 50 per cent and is poised to test the all-time highs. The company started reopening its US stores on May 11 after closing all of them to conform to state and local coronavirus regulations. The company reopened its first European store on May 5, 2020.

Generally, Apple shares underperform in June, but with strong technical momentum Apple shares are poised to break out to fresh all-time highs.

Why are Apple shares so strong

Apple continues to have a cult-like following, especially in the United States. Apple's iPhone has maintained approximately a 44 per cent market share of the US smartphone space during the past  six years and is poised to experience a robust increase in demand once it unveils a 5G-capable version of the iPhone. The new iPhone 11 and 11+ have received stellar reviews especially for the new camera and battery life. Nearly $80bn (£65bn, €73bn) worth of the shares is owned by the Oracle of Omaha, Warren Buffet, which provides a sense of confidence in Apple’s performance.

Apple shares tend to rebound in July ahead of its Q2 earnings results. During the past 10 years, the stock price has increased by 90 per cent of the time for an average gain of 6 per cent in July. If the shares follow the same pattern in 2020, prices are likely to consolidate in June and then refresh higher in July ahead of earnings.

The technical picture is positive as Apple shares are poised to test resistance near the all-time highs at $327.85 per share. Support is seen near the 10-week moving average near $277. Weekly medium-term momentum has turned positive as the MACD (moving average convergence divergence) index generated a crossover buy signal. This occurs as the MACD line (the 12-week moving average minus the 26-week moving average) crosses above the MACD signal line (the nine-week average of the MACD line). The MACD histogram also generated a crossover buy signal as the index sliced through the zero-index line. The MACD histogram is now printing in positive territory, with an upward sloping trajectory which points to higher prices. 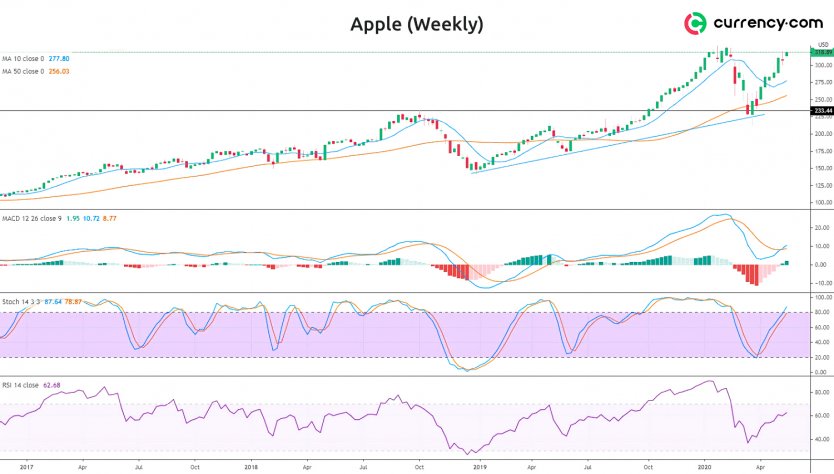 Apple shares have been on a tear and are likely to continue to push toward all-time highs. While historically June has been a weak month for the performance of the stock, the shares are facing robust technical momentum. This is likely to propel the shares to all-time highs in June and July as investors await Q2 earnings results.