Bitcoin price analysis (7-13 June): get ready for a sharp move this week

Bitcoin could witness a sharp move as uncertainty among the bulls and the bears is likely to resolve this week.

Bitcoin’s price is struggling to rise above $40,000, suggesting selling at higher levels. The creator of the popular bitcoin stock-to-flow models, PlanB, believes the price action of the past five months suggests destructive selling by institutional investors.

PlanB said in an interview with Preston Pysh that most of the fall in bitcoin has happened “in the illiquid hours of the market. That was followed by a sharp V-shaped recovery, indicating the sellers again accumulated bitcoin at lower levels.” The quant analyst considers this as a “very bullish” trend.

Bloomberg senior commodity strategist Mike McGlone said in the June edition of the Bloomberg Galaxy Crypto Index report that there is “greater potential for bitcoin to head toward $100,000 than sustain below $20,000.” McGlone believes the recent correction from the April highs has made bitcoin “stronger, greener and less extended”.

Analysts are not the only ones who are bullish on bitcoin. Norway’s finance minister Jan Tore Sanner recently said in an interview that “there may be a development over time, whereby you will be able to get more stabilisation mechanisms in the currencies that can lead to greater breakthroughs and upheavals in the slightly longer term.”

This shows the long-term picture of bitcoin remains positive. But has the largest cryptocurrency bottomed out or could it fall more in the short term? Read the bitcoin price trend analysis to find out. 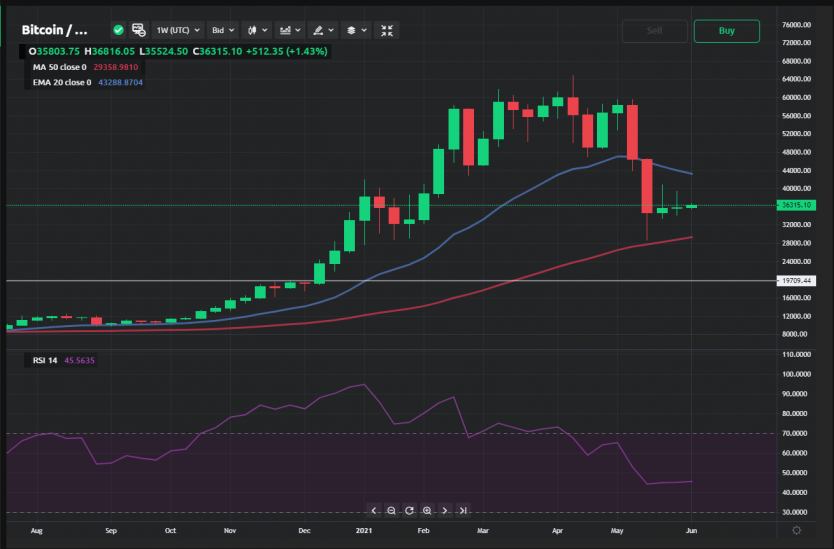 Bitcoin’s price has formed a Doji candlestick pattern for the past two consecutive weeks, suggesting indecision among the bulls and the bears. The currency’s price action has also formed successive inside-week candlestick patterns, cementing the uncertainty.

This state of indecision is unlikely to continue for long. If the bulls drive the price above the 20-week exponential moving average (EMA), it will suggest the start of a strong relief rally that may reach $50,000. If this psychological barrier is crossed, the next stop could be $60,000.

In contrast, if the bears sink the price below $33,401.95, the BTC/USD pair could challenge the 50-week simple moving average (SMA). A break below this support could result in panic selling.

The bitcoin price weekly analysis shows indecision among the bulls and the bears. Let’s see if a BTC price analysis of the daily chart provides any insight about the next directional move. 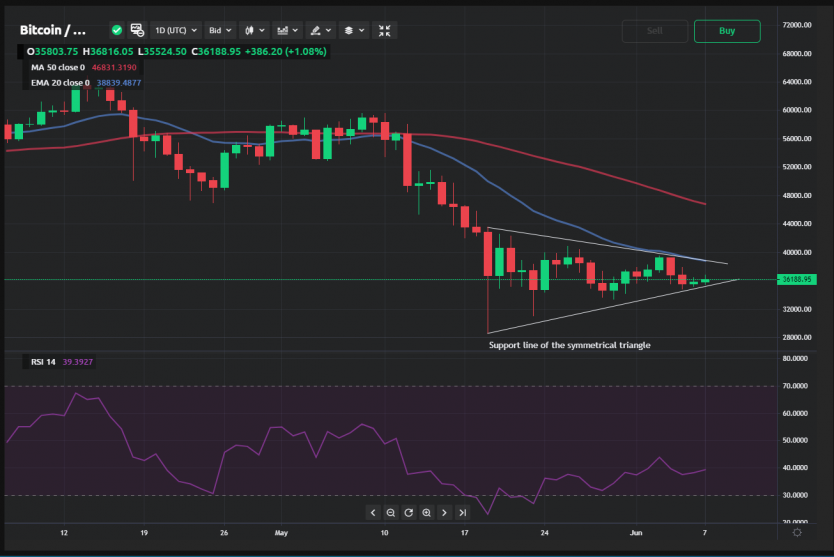 The bears then tried to sink the price below the channel on 5 June, but buying at lower levels has kept the pair inside the triangle. However, the weak bounce off the support line of the triangle suggests that buying interest could be waning.

The downsloping 20-day EMA and the relative strength index (RSI) in the negative territory suggest the bears have the upper hand. If the price turns down and plummets below the triangle, the pair could retest the 19 May low of $28,639.70.

A break and close below this critical support could result in panic selling, sinking the pair to $20,000. Such a deep fall will dampen sentiment, delaying the start of the next leg of the uptrend.

Conversely, if the bulls push and sustain the price above the triangle, the pair could rally to the 50-day SMA and then to $53,778.53.

Bitcoin is in a state of uncertainty, which is likely to resolve this week. If buyers propel and sustain the price above $40,000, the relief rally could pick up momentum. Traders could consider piggybacking on this possible ride higher.

Conversely, if the price breaks and sustains below $33,401.95, the trend could favour the bears. In such a case, traders may step on the sidelines until a bottom is confirmed.

Bitcoin vs Ethereum: The two big cryptocurrencies compared
The material provided on this website is for information purposes only and should not be regarded as investment research or investment advice. Any opinion that may be provided on this page is a subjective point of view of the author and does not constitute a recommendation by Currency Com or its partners. We do not make any endorsements or warranty on the accuracy or completeness of the information that is provided on this page. By relying on the information on this page, you acknowledge that you are acting knowingly and independently and that you accept all the risks involved.
АWin-Win
referral programme
Learn more