News&Features Analysis Bitcoin price analysis (13–19 September): is it a good time to buy?

Bitcoin price analysis (13–19 September): is it a good time to buy?

Bitcoin could witness aggressive selling below $42,389.50

After the initial enthusiasm leading up to El Salvador’s adoption of Bitcoin as legal tender, bears seized control last week. Bitcoin plummeted below $43,000 on 7 September as El Salvador’s rollout faced glitches. This led to massive liquidations worth $3.54 billion in the derivative markets within a 24-hour period, according to data from Bybt.

Strategists at JPMorgan Chase & Co said in a recent note quoted by Bloomberg: “El Salvador’s ill-conceived experiment should not be critical for the future of Bitcoin or cryptocurrencies.”

A survey conducted by Sherlock Communications through the research platform Toluna showed that 48% of respondents from Brazil wanted their nation to adopt Bitcoin as legal tender. Luiz Eduardo Abreu Haddad, a consultant for Sherlock, said: "El Salvador's experiment could become a big reference for Latin American countries on how to incorporate blockchain and cryptocurrencies to their economies and generate greater well-being to its citizens," Bitcoin Magazine reported.

Separately, a poll of 4,912 US residents by YouGov  about making Bitcoin legal tender showed strong support from 11% of respondents while 16% said they somewhat support the idea. The participants  aged 55 years and above were the ones who had the maximum objection, with 43% saying they strongly oppose the idea.

Rick Rieder, CIO of BlackRock, unfazed by the recent correction in Bitcoin, said in an interview with CNBC that he owns Bitcoin and expects it to rise “significantly in the future. “I like assets that are volatile that have upside convexity. I could see Bitcoin, like it has done, go up significantly," Rieder said.

Is it a good time to accumulate Bitcoin at lower levels or could the correction deepen further? Read our bitcoin price trend analysis to find out. 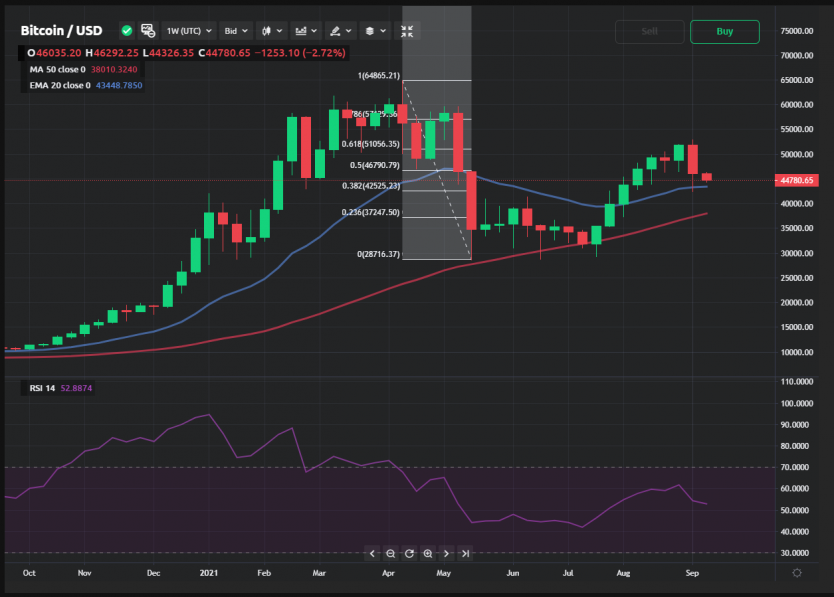 Although bulls purchased the dip to the 20-week exponential moving average (EMA) last week, they have not been able to sustain and build on the rebound. This indicates a lack of demand at higher levels.

The bears will now try to pull the price below the 20-week EMA. If they succeed, the pair could drop to the 50-week simple moving average (SMA), which may act as a strong support.

Alternatively, if the price once again rebounds off the 20-week EMA, the bulls will try to push the pair toward the overhead resistance zone of $50,000 to $52,953.85. A break above this zone will indicate the resumption of the uptrend toward the target objective at $60,000.

The Bitcoin price weekly analysis shows the bears have made a strong comeback and are trying to solidify their position. 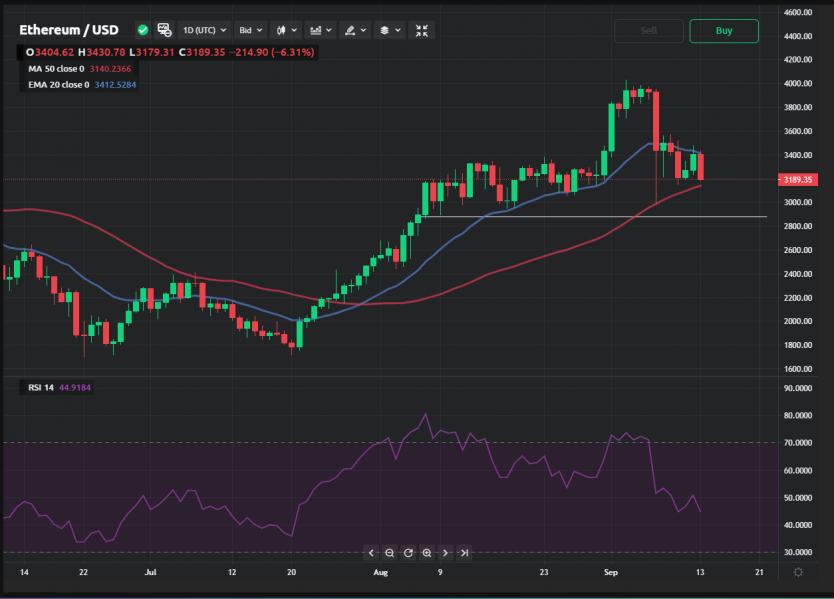 Bitcoin’s price plunged below the support line of the ascending channel pattern on 7 September. Although the bulls purchased at lower levels, they could not push the price back into the channel.

The downsloping 20-day EMA and the relative strength index (RSI) in the negative territory indicate advantage to bears. The sellers have flipped the 20-day EMA into resistance in the past few days. This suggests that the sentiment has turned negative and traders are selling on rallies.

If the price slips below $42,389.50, the selling could intensify further and the pair could extend its decline to the next support at $37,282.85. The deeper the fall, the longer it will take for the next leg of the uptrend to begin.

The bulls will have to push and sustain the price above the 20-day EMA to indicate that the correction could be over.

Bitcoin’s failure to sustain above the psychological mark at $50,000 shows that traders are booking profits on rallies. If bears sink the price below $42,389.50, the selling could intensify. This negative view will invalidate if bulls push and sustain the price above the 20-day EMA.