In a series of tweets on 17 July, Ecoinometrics compared the price trajectory of the current correction in Bitcoin to 2013.

Although the drawdown duration of 95 days is one of the longest during the post-halving bull market, it is still only half of the 197 days’ drawdown of 2013. Even in terms of price correction, Bitcoin may fall more if it mirrors the 69% drop seen in 2013.

BlackRock CEO Larry Fink said during an interview with CNBC on 14 July that he was not asked one question about Bitcoin in his two weeks of business travel. The retirement and long-term investors were not focused on Bitcoin, which led to very little demand.

DoubleLine’s founder and CEO, Jeffrey Gundlach, warned in another interview on CNBC about the bearish head-and-shoulders top forming on Bitcoin. He said investors may get an opportunity to buy Bitcoin below $23,000.

Data from Cryptoquant showed that the Bitcoin assets of the Canadian Bitcoin fund operated by 3iQ Corp dropped from about 24,000 Bitcoin in April to about 13,000 Bitcoin in June.

However, not everyone is bearish on the long-term prospects of Bitcoin. The billionaire investor Tim Draper, in an interview with Benzinga, reiterated his price prediction of “$250k per Bitcoin by end of 2022 or early 2023”.

What are the critical levels that bulls need to protect to avoid the next plunge? Read our Bitcoin price trend analysis to find out. 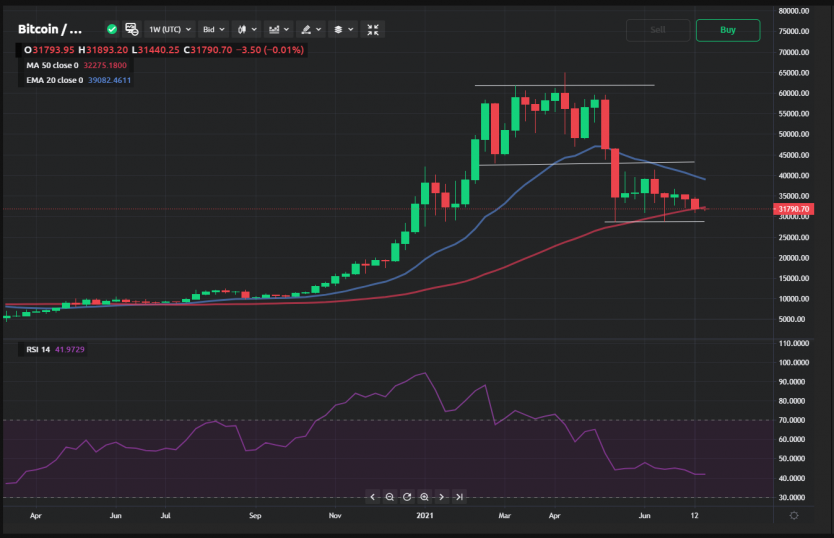 Bitcoin’s price dropped to the 50-week simple moving average (SMA) last week, suggesting that bears continue to sell on every minor rally. The BTC/USD pair dropped 7.2% to end the week at $31,794.20, its lowest weekly close in 2021.

The down-sloping 20-week exponential moving average (EMA) and the relative strength index (RSI) below 42 indicate that bears have the upper hand.

Contrary to this assumption, if the price rebounds off the 50-week SMA, the bulls will make one more attempt to push the pair above the immediate resistance at $36,658. If they succeed, the pair could challenge the 20-week EMA.

The Bitcoin price weekly analysis shows the bears are in control and the price could retest the critical support at $28,639.70 in the short term. 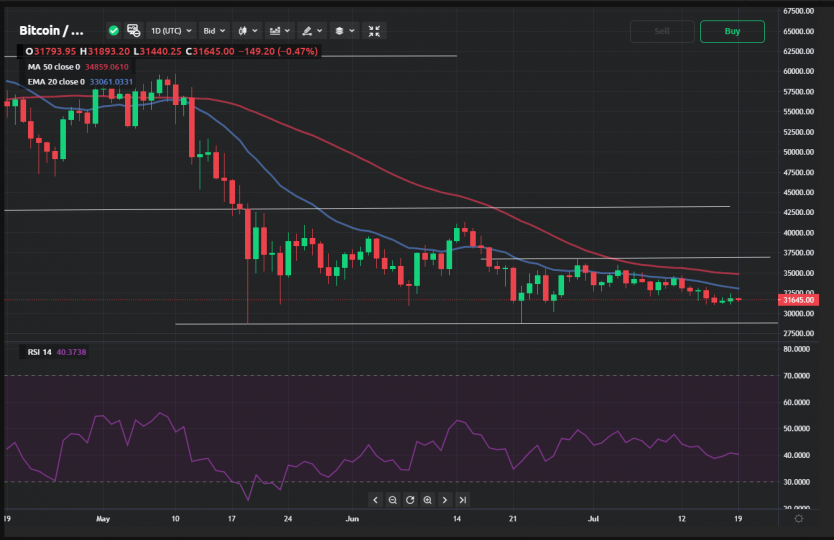 The bulls attempted to push Bitcoin’s price above the 20-day EMA on 11 and 12 July but failed. This indicates that bears are selling on pullbacks to the 20-day EMA.

If bears sink the price below the $31,000 to $30,000 support zone, the pair could retest $28,639.70. Both moving averages have started to slope down and the RSI is in negative territory, suggesting the path of least resistance is to the downside.

A break below $28,639.70 will indicate that bears have absorbed the demand, and that may start the next leg of the downtrend.

Alternatively, if the price turns up from the current level and rises above the moving averages, it will indicate accumulation by bulls at lower levels.

Bitcoin’s price has been gradually drifting lower in the past few days, indicating a lack of demand from traders. The buyers may attempt to defend the $28,639.70 support and a strong rebound will indicate accumulation by the bulls.

Conversely, a weak bounce will increase the possibility of a break below the level. A breakout of the moving averages will be the first sign that bulls are attempting a comeback.

Bitcoin vs Bitcoin Cash vs Bitcoin SV: The ultimate guide
The material provided on this website is for information purposes only and should not be regarded as investment research or investment advice. Any opinion that may be provided on this page is a subjective point of view of the author and does not constitute a recommendation by Currency Com or its partners. We do not make any endorsements or warranty on the accuracy or completeness of the information that is provided on this page. By relying on the information on this page, you acknowledge that you are acting knowingly and independently and that you accept all the risks involved.
АWin-Win
referral programme
Learn more