Bitcoin started last week on a weak note and dipped below $30,000 on 20 July. While several participants were anticipating the correction would continue, Bitcoin made a sharp recovery in the second half of the week.

The sentiment seems to have turned positive after Elon Musk, chief executive of Tesla and SpaceX, said during the B Word cryptocurrency conference that he holds bitcoin along with ethereum and dogecoin and has no plans to sell his bitcoin in the near future. The BBC reported that Musk added:  “I would like to see bitcoin succeed."

During the same conference, Cathie Wood, founder, CEO and CIO of ARK Invest, said that her mentor, the economist Arthur Laffer, believed that Bitcoin’s market capitalisation has the potential to equal the total US monetary base.

The total US monetary supply, according to Federal Reserve data, was more than $6tn  as of May. Bitcoin will have to rally to about $320,000 to reach that landmark.

The sentiment received a further boost when an anonymous insider told the London business newspaper City A.M. that Amazon is planning to start accepting bitcoin payments by the end of this year and is considering releasing its own token in 2022.

After the recovery, is it time to book profits or could the relief rally extend further? Read our Bitcoin price trend analysis to find out. 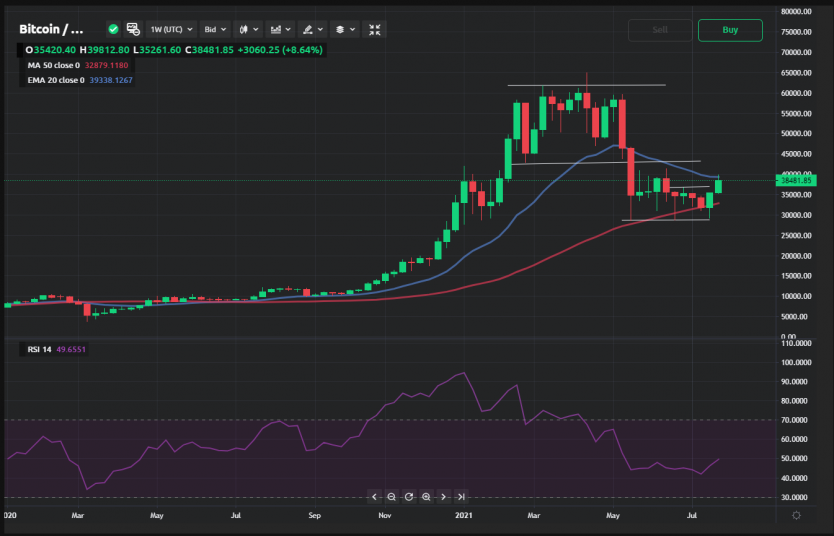 Bitcoin’s price plunged to $29,286.60 last week but staged a recovery to close at $35,421.60, clocking gains of 11.41% on the previous week’s close. This suggests that bulls are aggressively accumulating at lower levels.

The 20-week exponential moving average (EMA) has started to flatten out and the relative strength index (RSI) has risen to the midpoint, suggesting that sellers are losing their grip.

The BTC/USD pair has reached the 20-week EMA, which could act as a stiff resistance. However, if bulls do not give up much ground, the possibility of a break above the 20-week EMA increases. If that happens, the pair could rally to the resistance at $41,327.35.

Conversely, if the price turns down from the current level and plummets below the 50-week simple moving average (SMA), it will indicate that bears continue to sell aggressively at higher levels. The Bitcoin price weekly analysis shows the bulls are attempting a comeback. 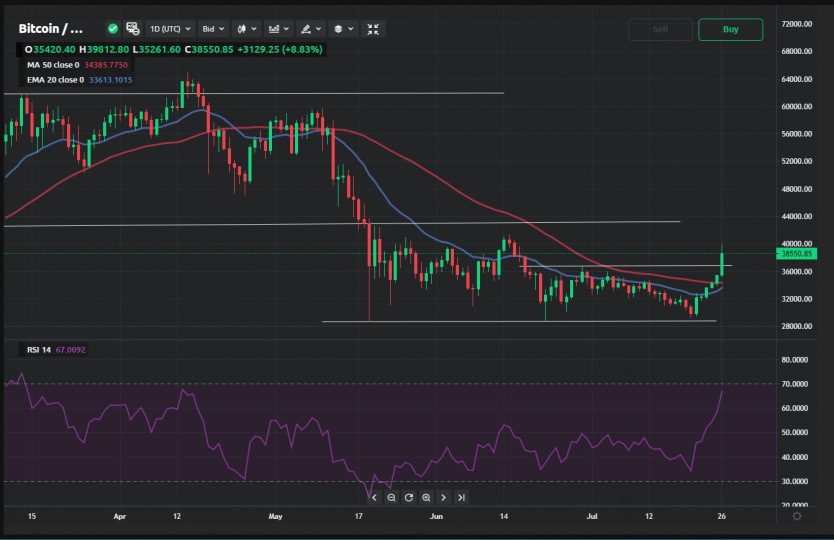 The bulls aggressively bought the dip below $30,000 on 20 July and the momentum picked up after the pair closed above the 20-day EMA on 23 July. The rally continued and bitcoin’s price closed above the 50-day SMA on 25 July for the first time since 9 May.

This may have forced the bears to cover their positions, resulting in a short squeeze. This has resulted in a sharp rally today, driving the price above the $36,658 resistance.

The wick on the candlestick today indicates that bears are aggressively defending the psychological level at $40,000. If bulls do not allow the price to dip back below $36,658, the upward trend may continue and reach the $41,327.35 to $42,553.25 resistance zone.

On the other hand, if the price turns down from the current level and breaks below $36,658, it will indicate that buying dries up at higher levels. That could keep the pair range-bound between $30,000 and $40,000 for the next few days.

This positive view will invalidate if the price turns down and plummets below $36,658.

Bitcoin vs Bitcoin Cash vs Bitcoin SV: The ultimate guide
The material provided on this website is for information purposes only and should not be regarded as investment research or investment advice. Any opinion that may be provided on this page is a subjective point of view of the author and does not constitute a recommendation by Currency Com or its partners. We do not make any endorsements or warranty on the accuracy or completeness of the information that is provided on this page. By relying on the information on this page, you acknowledge that you are acting knowingly and independently and that you accept all the risks involved.
АWin-Win
referral programme
Learn more