Bitcoin remains in a strong downwards trend with the possibility of a drop to $20,000

After the massive rally in 2021, bitcoin’s price has taken a sharp hit and is down around 40% in May. This puts it on track for the worst monthly performance since 2011. However, Rich Dad, Poor Dad author Robert Kiyosaki is not worried because he considers the fall to be a buying opportunity.

When market sentiment turns negative, traders don’t give credit to positive news or rumours. Bitcoin, for example, tried to stage a recovery on news that Tesla CEO Elon Musk had had discussions with North American bitcoin miners to publish usage of renewable energy for mining.

The relief rally fizzled out above $40,000, however. This indicates traders are selling on positive news.

But it is not all gloom and doom in the market. On-chain data analytics service Glassnode said in its weekly newsletter that the Grayscale Bitcoin Trust (GBTC) premium has risen during the current fall in bitcoin’s price. This indicates growing demand from institutional investors.

Should retail traders be buying at current levels or could bitcoin slump further and give better entry opportunities in the next few days? Read the bitcoin price trend analysis to find out. 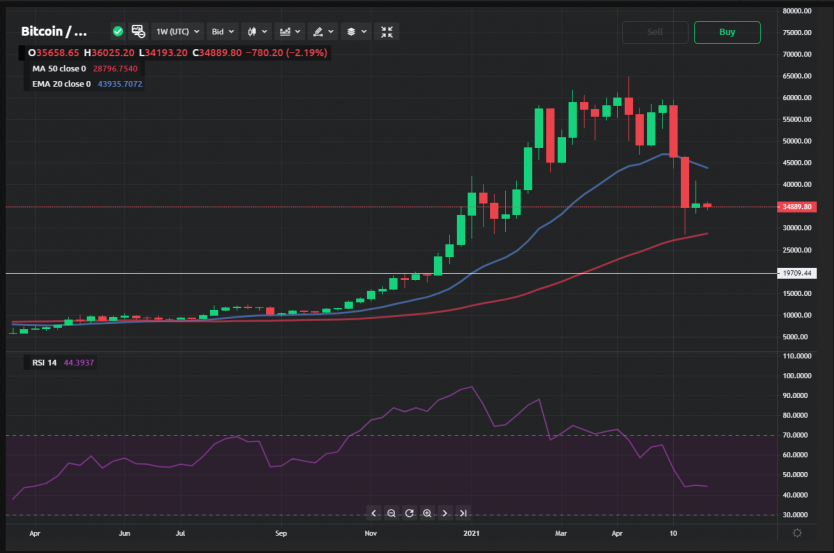 Bitcoin’s price attempted a recovery last week but the long wick on the candlestick suggests that selling occurred at higher levels. Bitcoin closed at $35,670, rising marginally by 2.58% during the week.

The failure of the bulls to sustain the higher levels during the week indicates that traders may be closing their long positions on rallies. The 20-week exponential moving average (EMA) has turned downwards and the relative strength index (RSI) has slipped into the negative territory, indicating an advantage to the bear traders.

Contrary to this assumption, if bull traders defend the 50-week SMA, the BTC/USD pair may consolidate between the moving averages for a few weeks before starting the next trending move.

The bitcoin price weekly analysis shows the bear traders have the upper hand. Does the BTC price analysis of the daily chart project a further downwards slide or is a rebound in sight? 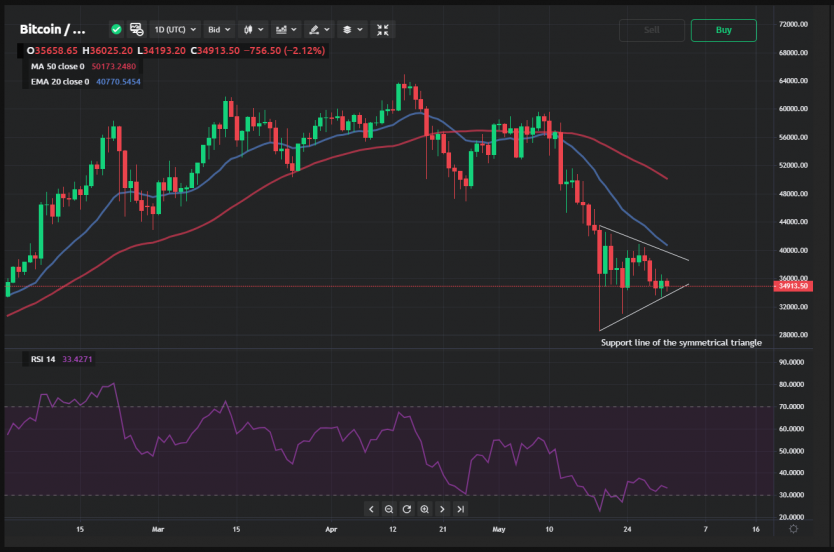 After the recent fall, bitcoin’s price has formed a symmetrical triangle, which usually acts as a continuation pattern. If the bears sink and sustain the price below the triangle, the next leg of the downwards trend could begin.

The first support on the downwards side is $28,639.70 and if this level cracks, the decline could extend to the pattern target of $19,032. The downward sloping moving averages and the RSI near the oversold territory indicate that the bear traders are in control.

If bull traders defend the support line of the triangle, however, the pair could consolidate inside the triangle for a few more days. A breakout and close above the triangle will be the first sign of strength.

Bitcoin is in a downtrend and sentiment is negative. As long as the price remains below the 20-day EMA, bear traders are likely to sell on every minor rally. Buying in a downtrend could result in quick losses as support levels crack.

Therefore, barring short-term traders who may attempt to ride the counter-trend rally, positional traders may decide to remain on the sidelines until a new buy setup is formed.