Bitcoin rallied above $45,000 on 8 August, rising to its highest level since 19 May. Some analysts believe that the current up-move is still in its initial stages and bitcoin could witness a strong bull run like the one that started in October 2020.

Fidelity Digital Assets’ presiden, Tom Jessop, told Yahoo Finance that investors view cryptocurrencies as a “unique asset class with its own fundamental drivers, which differ from other financial assets.” There is strong demand from family offices, hedge funds and even more traditional institutions. However, lack of regulatory clarity could be holding back investors from committing “significant assets to the space,” Jessop said.

JPMorgan Chase has created a new bitcoin fund with the crypto firm NYDIG and will allow private clients to invest in them, according to sources, Coindesk reported. The unidentified sources also said that the latest fund will be marketed to clients as one of the cheapest and safest bitcoin investment products available in the private markets.

With the sentiment improving, could bitcoin start a new uptrend or is this just a dead cat bounce that will be sold into? Read our Bitcoin price trend analysis to find out. 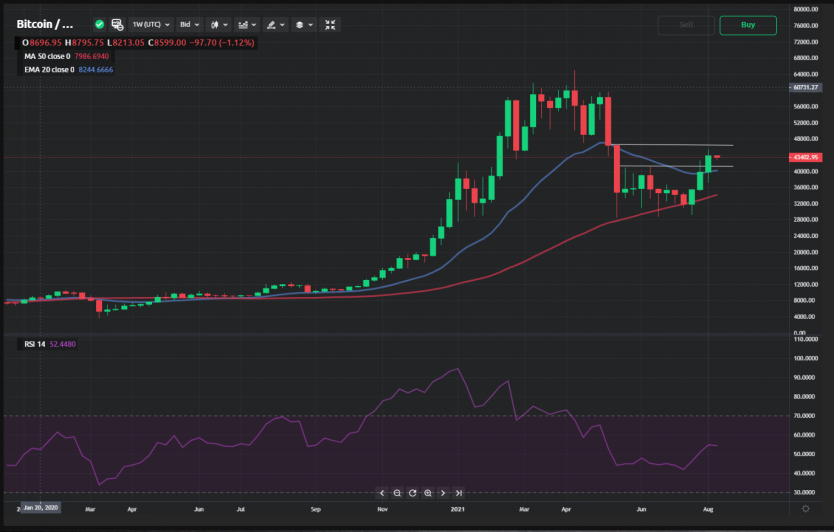 Bitcoin’s price soared 9.97% last week to end at $43,820.40. The rally has risen above the 20-week exponential moving average (EMA) and the stiff overhead resistance at $41,327.35, indicating that bulls are attempting a comeback.

The 20-week EMA has started to slope up and the relative strength index (RSI) has risen into the positive territory, suggesting that the path of least resistance is to the upside. If buyers drive the price above $46,650.10, the bullish momentum could pick up further and the BTC/USD pair could rally to $60,000.

However, the bears are likely to have other plans. They will attempt to mount a stiff resistance at $46,650.10 and pull the price back below the 20-week EMA. If that happens, the pair could drop to the 50-week simple moving average (SMA).

The Bitcoin price weekly analysis shows the bulls have made a strong comeback, but can they push the price to the psychological level at $50,000? 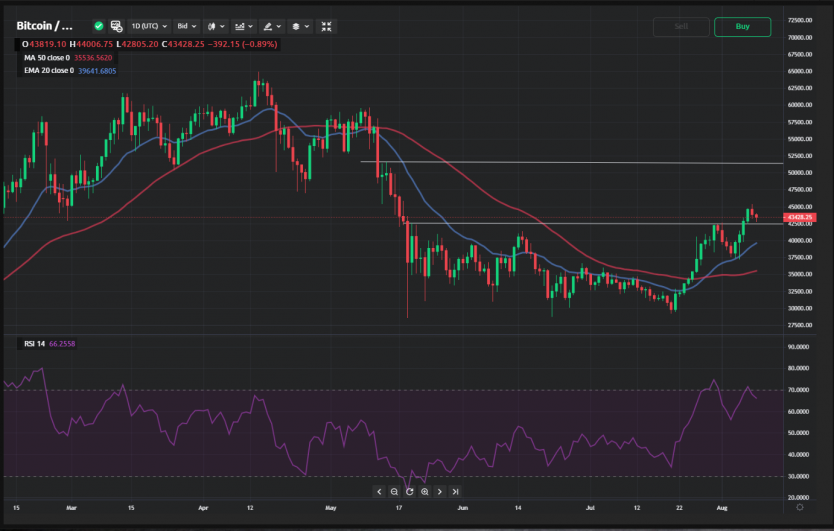 Bitcoin’s price turned down from $42,615.20 on 1 August, but the positive sign is that the bulls arrested the decline at the 20-day EMA. This suggests that the sentiment has changed from sell on rallies to buy on dips.

The price rebounded off the 20-day EMA on 4 August and the bulls pushed the pair above the overhead resistance on 6 August. But the bears are not willing to throw in the towel, as they are attempting to pull the price back below $42,550.

If they succeed, the pair could drop to the 20-day EMA. If the price again rebounds off this support, the buyers will try to resume the relief rally and drive the pair to the overhead resistance zone of $50,000 to $51,500.

Conversely, if the bears sink the price below the 20-day EMA, it could trap several aggressive bulls. The pair may then drop to the 50-day SMA.

Alternatively, if the price breaks below the $42,500 support, the drop could extend to the 20-day EMA. This is an important level to keep an eye on, because if it cracks, the bulls may rush to the exit.

The views and opinions expressed in the article are those of the author and do not constitute trading advice. Trading and investing involve substantial risks and you should do your own research or contact your financial adviser before arriving at a decision. ​​​​​

Bitcoin to US Dollar
Trader sentiment (on leverage)
Daily change
17112.2
Low: 17084
High: 17253.2
Sell 17112.15 Buy 17112.30
Sell 17112.15 Buy 17112.30
The material provided on this website is for information purposes only and should not be regarded as investment research or investment advice. Any opinion that may be provided on this page is a subjective point of view of the author and does not constitute a recommendation by Currency Com or its partners. We do not make any endorsements or warranty on the accuracy or completeness of the information that is provided on this page. By relying on the information on this page, you acknowledge that you are acting knowingly and independently and that you accept all the risks involved.
АWin-Win
referral programme
Learn more