News&Features Analysis Bitcoin price analysis for 17-23 May: is bull market over?

Bitcoin price analysis for 17-23 May: is bull market over?

Tesla CEO Elon Musk tweeted on 13 May that the carmaker will stop accepting bitcoin payments for vehicle purchases due to the use of fossil fuels in mining the altcoin. His statement that Tesla will not sell its Bitcoin holding did little to soothe investor sentiment and Bitcoin plunged by 12% following the tweet.

Just as the crypto market was trying to stabilise after these comments, the crypto investors were hit with another tweet from Musk where he suggested that Tesla may have sold its Bitcoin haul or may do so in the future.

Musk’s backtracking on bitcoin has raised concern about further institutional adoption. However, Fundstrat Global Advisors managing partner Tom Lee does not believe Musk’s actions will “get people negative on bitcoin”. Lee has reiterated his bullish stance by raising his year-end target for Bitcoin from $100,000 to $125,000.

While analysts may be bullish in the long term, what is the picture in the short term? 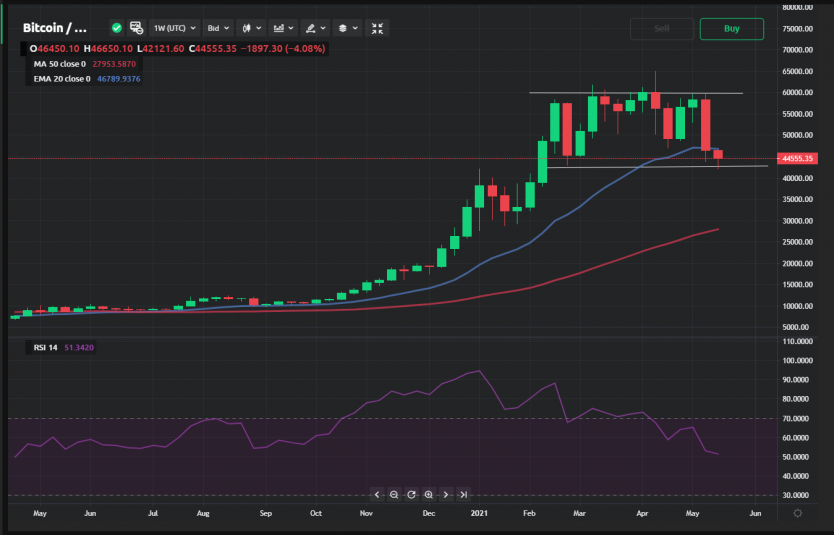 The failure of bull traders to push bitcoin’s price above the $60,000 level last week could have attracted profit-booking. The largest cryptocurrency plunged 20.35% to end the week at $46,452.65.

This fall has resulted in the first weekly closing below the 20-week exponential moving average (EMA) since April 2020. The relative strength index (RSI) has formed a large negative divergence, indicating the bullish momentum has weakened.

The bitcoin price weekly analysis shows the bullish momentum has weakened and the bear traders are trying to gain the upper hand. Does the BTC price analysis of the daily chart project a rebound or a further decline? 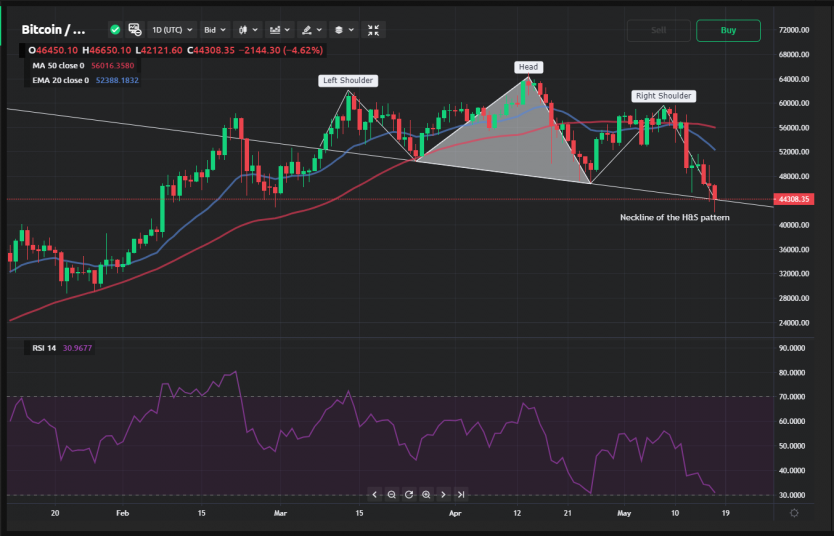 Bitcoin’s price has formed a bearish head and shoulders pattern, which will complete on a breakdown and close below the neckline. Until that happens, the setup will not be considered complete.

The long tail on today’s candlestick suggests the bulls are attempting to defend the neckline. A strong rebound off this level could push the price to the 20-day EMA. When the sentiment is bearish, traders sell on relief rallies to the 20-day EMA.

The downsloping 20-day EMA and the relative strength index (RSI) near the oversold territory suggest the bears have the upper hand. If the pair turns down from the 20-day EMA, the bears may make one more attempt to sink the price below the neckline.

If they succeed, the pair could start its southward journey toward the pattern target of $30,743.14. This negative view will become invalid if the bulls push the price above the right shoulder of the head and shoulders pattern.

Both weekly and daily chart patterns suggest that the trend has weakened. If the bears sink and sustain the price below $40,000, bitcoin could witness a sharp correction. Buying in a downtrend could quickly turn the position into a loss. Therefore, traders may remain on the sidelines and wait for the correction to end and a reliable bottom to form before jumping in to buy.