News&Features Analysis Bitcoin price analysis for April 12-18: will Coinbase listing be bullish or bearish for Bitcoin?

Bitcoin price analysis for April 12-18: will Coinbase listing be bullish or bearish for Bitcoin?

The direct listing of popular cryptocurrency exchange Coinbase on April 14 will influence the short-term crypto market sentiment. According to the trading on the private market, Coinbase could command a valuation of as high as $100bn. That would make it one of the largest technology companies to go public in the past few months.

Bitcoin’s latest bull run has benefitted Coinbase whose revenues jumped from $190.6m in Q1 2020 to $1.8bnn in Q1 2021. Along with Coinbase, its competitor, Kraken has also seen a blow-up quarter. Kraken CEO and co-founder Jesse Powell, in an interview with CNBC, said:

“The first quarter just completely blew away the entirety of last year. We beat last year’s numbers by the end of February.”

The listing of the crypto exchanges may bring greater visibility for cryptocurrencies among the traditional investors, which could be bullish for the sector. Tom Jessop, head of Fidelity Digital Assets at Fidelity Investments, believes crypto has “reached a tipping point” and its adoption is likely to continue “at an accelerated pace” due to the ultralow interest rates

Let’s perform the Bitcoin trend analysis of the weekly chart to determine the critical levels both on the upside and downside. 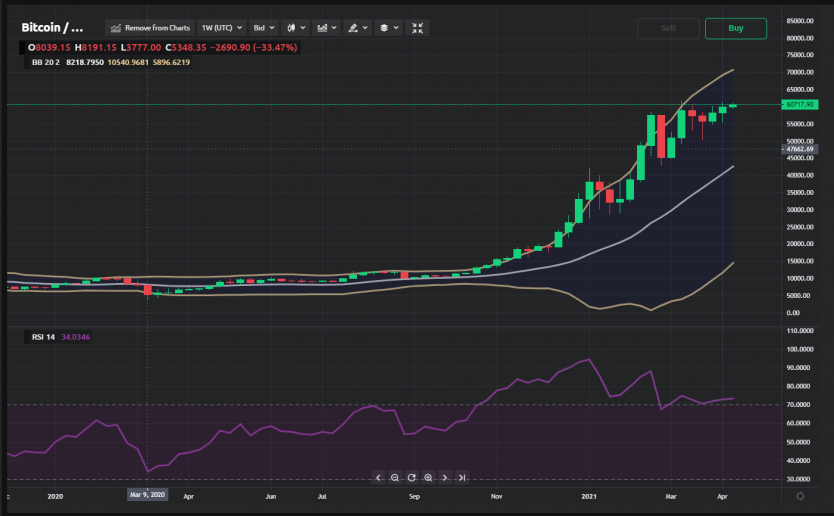 However, the positive sign is that the bulls have not allowed the BTC/USD pair to lose ground. This shows that traders are not booking profits in a hurry because they anticipate the uptrend to resume.

If the bulls can thrust the price above the all-time high, the next leg of the up-move could begin, which has a target objective at $72,521.25. The Bollinger bands are sloping up and the relative strength index (RSI) is in the overbought zone, indicating the path of least resistance is to the upside.

The first sign of weakness will be if the bears pull the price below $50,411.35. If that happens, the pair could drop to the middle band of the Bollinger Band where it is likely to find support.

The Bitcoin price weekly analysis shows that bulls are in command. Let’s perform the BTC price analysis of the daily chart to spot the critical levels on the upside and the downside. 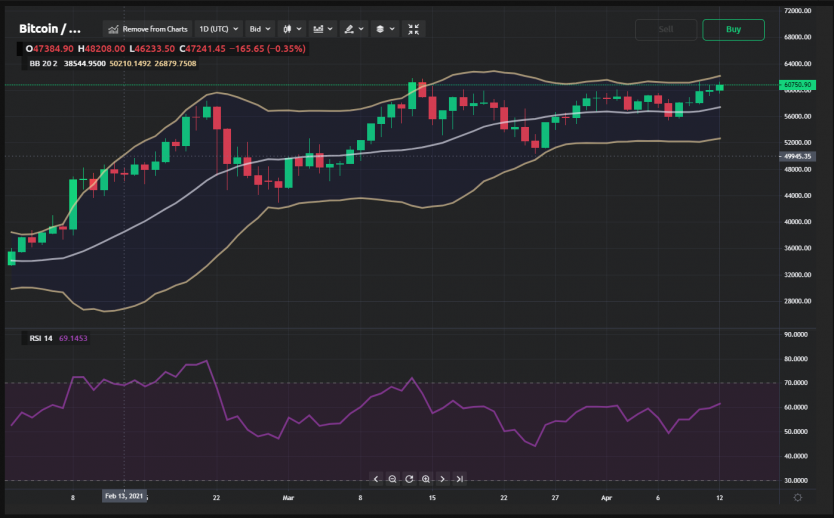 Bitcoin’s price has been trading in the upper half of the Bollinger Bands for the past few days. The bulls tried to pierce the upper band on April 10 but failed, which resulted in profit-booking as seen from the long wick on the day’s candlestick.

That was followed by a doji candlestick pattern on April 11, indicating indecision among the bulls and the bears. The Bollinger bands have turned up marginally and the RSI has risen above 61, suggesting the possibility of an upside breakout.

This bullish view will invalidate if the price once again turns down from the upper band and breaks below the middle band. Such a move will suggest the short-term traders have given up and are dumping their positions. That could pull the price down to the lower band. A break below the lower band may signal the start of a deeper correction.

Bitcoin is likely to break out to the upside this week. Traders may consider buying on a breakout above $62,000 if it sustains for a few hours. The stop-loss may be placed below $55,000. The stops could be trailed higher as the price moves up.

Ideally, the breakout above $62,000 should not look back and dip below $60,000. If it does, traders may reduce their risk by closing half their positions without waiting for the stops to be hit and hold the rest with the stops at $55,000.

If the price turns down and dips below the middle band, traders may remain on the sidelines.