News&Features Analysis Bitcoin price analysis for April 19-25: the volatility is back, so how to trade now?

Bitcoin price analysis for April 19-25: the volatility is back, so how to trade now?

Bitcoin’s failure to sustain the price above $60,000 suggests demand may be drying up at higher levels, signalling a possible change in trend

A confluence of several negative factors could be behind the sharp plunge in Bitcoin over the weekend. With Coinbase listing, the euphoria in the crypto markets reached a new peak in the past week. Frenzied buying in Dogecoin propelled it to the fifth position in terms of market capitalisation. It is interesting to note that Dogecoin is only a meme coin and does not have any developers and use cases. Galaxy Digital CEO Michael Novogratz said such frenzies “never end well”.

Another possible reason that could have led to the sharp correction was a tweet from the account of @Fxhedgers, which citing unnamed sources hinted at a possible crackdown on financial institutions by the US Treasury.

Ledgermatoc CEO Luke Sully however attributed the fall to a “power outage in China”. Analysts also pointed to a sharp drop in “hash rate” due to the outage. However, Sovryn co-founder Edan Yago said:

"Typically shocks to hash rate do not cause price drops. The recent price drop is well within the bounds of typical volatility, it is noise not signal,"

While it is difficult to pinpoint the cause for the fall, let’s perform the Bitcoin trend analysis of the weekly chart to determine if the decline has changed the chart structure and the trend. 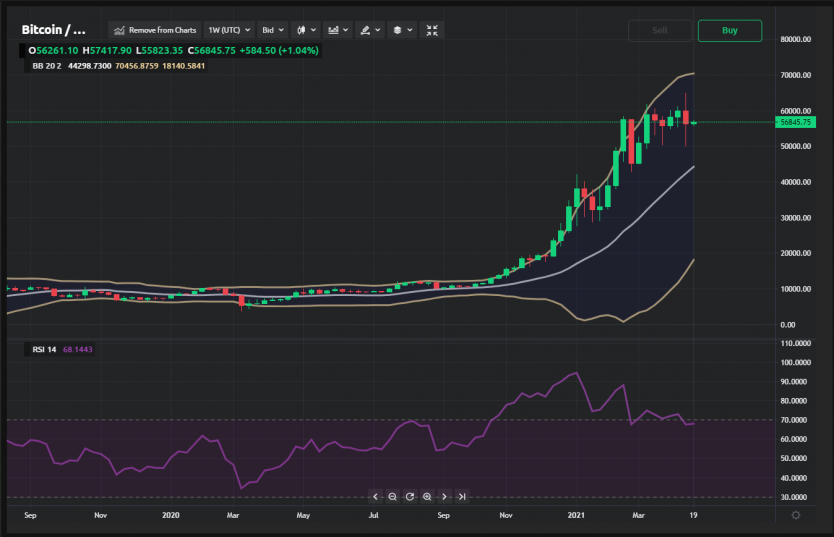 Bitcoin’s price made a new all-time high of $64,919.10 last week but the bulls could not sustain the higher levels. Profit booking pulled the price down to $50,144.80 but the bulls again purchased the lows and the biggest cryptocurrency ended the week at $56,261.25 with a loss of 6.21 per cent over the previous week.

The volatility of the past week has formed a bearish engulfing candlestick pattern, which warns of a possible trend reversal. A down move will be confirmed if the bears can sink the price below $50,144.80 this week. Such a move will suggest the start of a correction that could reach the middle band.

Although the middle band is still sloping up, the relative strength index is showing a negative divergence, indicating the momentum has weakened. A break below the middle band could start a deeper correction that could surprise on the downside.

This negative view will be invalidated if the bulls push the BTC/USD pair above $64,919.10. Such a move will suggest that the bulls have absorbed the supply and the next leg of the uptrend could reach $72,521.25.

The Bitcoin price weekly analysis shows that bears are trying to make a comeback. Let’s perform the BTC price analysis of the daily chart to spot any bearish patterns. 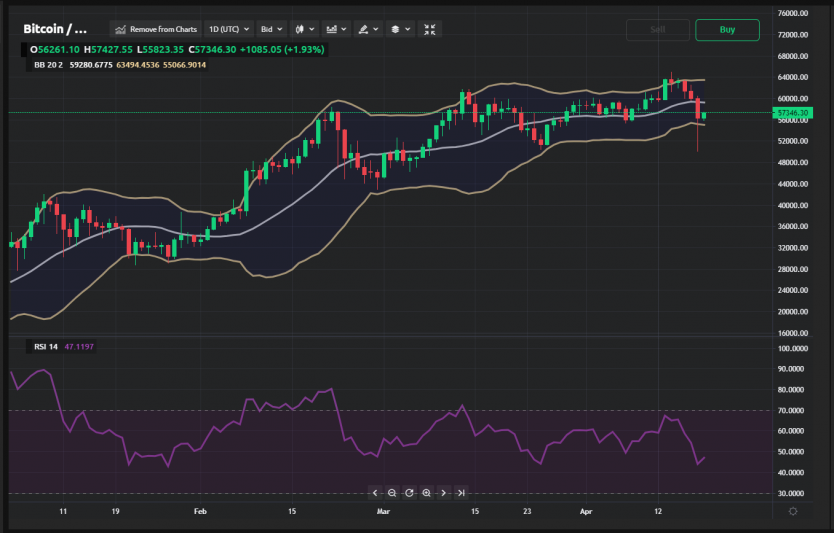 This move could have trapped the aggressive bulls who purchased the break above $61,777.85. The selling intensified after the pair dipped below the middle band. Long liquidation could be one of the reasons for the sharp fall to $50,144.80.

However, the positive sign is that the bulls aggressively purchased the dip on April 18 as seen from the long tail on the candlestick. If the bulls can push the price above the middle band, the price could consolidate between the upper and lower band for a few days.

On the contrary, if the price turns down and plummets below $50,000, the pair could drop to $42,979.50. This is an important support to watch out for because if it cracks, the selling may intensify and the decline could extend to $32,500.

Bitcoin broke above $62,000 on April 13, triggering the trade recommended in the previous analysis. However, the bulls could not sustain the higher levels and the price started to turn down from April 14. Traders who followed the suggestion to trail the stops higher and close the position at $60,000 could have escaped at break even or at a nominal loss. At the current levels, the uncertainty is high, therefore traders may remain on the sidelines.