News&Features Analysis Bitcoin price analysis for August 24-30: the coin could remain range-bound in the short-term

Bitcoin price analysis for August 24-30: the coin could remain range-bound in the short-term

Robert Kiyosaki, the author of Rich Dad Poor Dad, tweeted that Warren Buffet dumping bank stocks from his portfolio is a warning sign that the banks are bankrupt and a major banking crisis could be around the corner. Hence, he advised his followers to buy gold, silver and Bitcoin instead of thinking about it.

Tone Vays, the derivatives trader and youtube personality, expects Bitcoin’s price to remain above $10,000 this year and breakout of $20,000 in 2021. In the interview with IGTV Vays pointed out that Bitcoin has historically doubled in price after hitting a new all-time high, “especially when it takes years to break that all-time high.” Hence, he has a target of $45,000 to $50,000 for Bitcoin.

Do the charts also project a similar bullish view? Let’s do the Bitcoin price trend analysis of the weekly chart and the daily chart to find out. 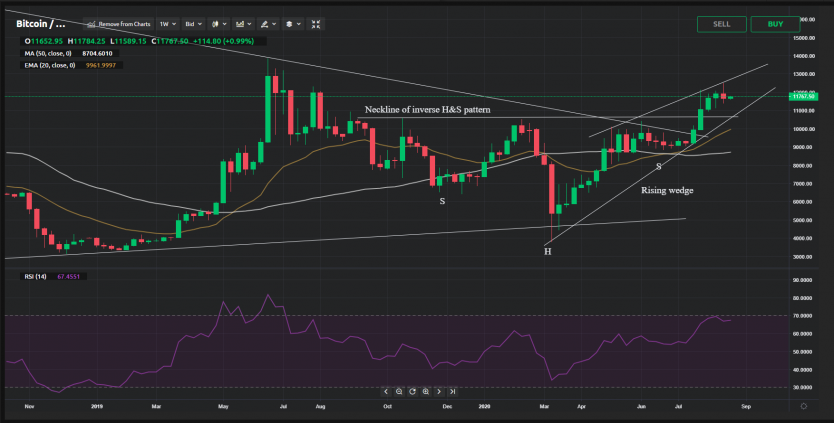 After four consecutive weekly closes in the green, Bitcoin corrected 2.21 per cent last week to end at $11,652.70. During the week, the bulls had pushed the price above the overhead resistance of $12,312.60 but they could not sustain the higher levels, which suggests profit booking by the short-term traders.

However, the positive sign is that the bulls have not given up much ground, which suggests that several traders are holding on to their positions as they expect the uptrend to resume.

The BTC to USD pair has formed a rising wedge pattern. If the bulls can push the price above the wedge, the momentum is likely to pick up and a quick rally to $13,839.90 is possible.

The upsloping 20-week EMA and the RSI close to the overbought territory suggests that the path of least resistance is to the upside.

Contrary to this assumption, if the bears sink the pair below the wedge and the 20-week EMA, it will be a huge negative as that can result in a decline to the 50-day SMA at $8,700.

The Bitcoin price weekly analysis shows some profit booking at higher levels, which could lead to a minor correction or consolidation for a few days. However, as long as the price sustains above $11,000, the bulls will make another attempt to push the price above $12,500 and resume the uptrend. 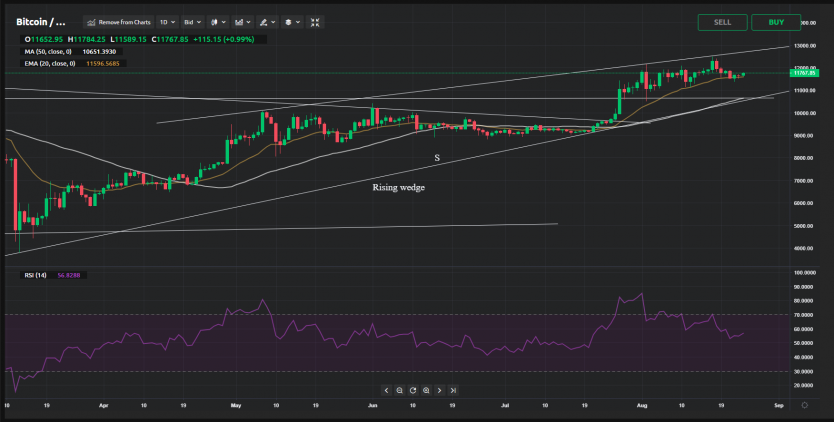 Bitcoin turned down from the resistance line of the rising wedge pattern on August 17, which shows that the bears are attempting to defend this resistance.

However, the positive sign is that the bulls did not allow the price to dip and sustain below the 20-day EMA.

Currently, the 20-day EMA has flattened out and the RSI has also dipped to just above the midpoint, which suggests a consolidation in the short-term.

On the downside, the first support is at $11,100 and below it $10,900. If both these levels fail to provide support, the decline could extend to the critical support at $10,500. A breakdown of this support will tilt the advantage in favour of the bears.

Conversely, if the pair rises from the current levels, the $12,137.90–$12,481.65 could act as stiff resistance. Once the bulls scale the price above the wedge, the momentum is likely to pick up.

Currently, the short-term indicators suggest that a few days of consolidation is possible. If the bulls sustain the price above the 20-day EMA, then it will be a positive sign and could result in an up-move to $12,481.65.

As breakouts are not giving returns, traders could consider initiating long positions on a rebound off strong support levels.

However, if the price sustains below the 20-day EMA, traders could step aside until Bitcoin forms a decisive bottom. 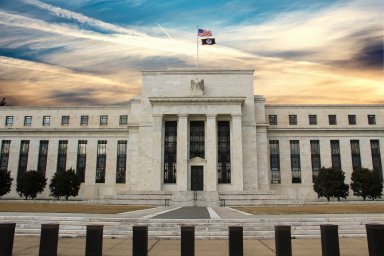 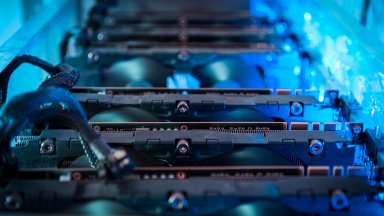