News&Features Analysis Bitcoin price analysis for February 1-7: coin may rally above $37,000 this week

Bitcoin price analysis for February 1-7: coin may rally above $37,000 this week

That was enough for Bitcoin’s price to surge about 20 per cent, liquidating about $387m in short positions.

However, the ‘Elon Musk pump’ did not last long because demand dried up at higher levels and Bitcoin’s price retraced a large part of the gains within two days. This suggests the sentiment has turned negative and the professional traders are booking profits at higher levels.

This does not necessarily mean that Bitcoin’s price will plummet because institutional investors have continued to buy at lower levels. As of January 29, Grayscale had purchased over 40,000 Bitcoin in 2021, compared to the 26,000 Bitcoin that was mined.

When the bulls buy at lower levels and bears sell on rallies, that generally means the asset is likely to remain range-bound for a few days. Let’s do the Bitcoin price trend analysis of the weekly chart to determine if it also projects a similar view. 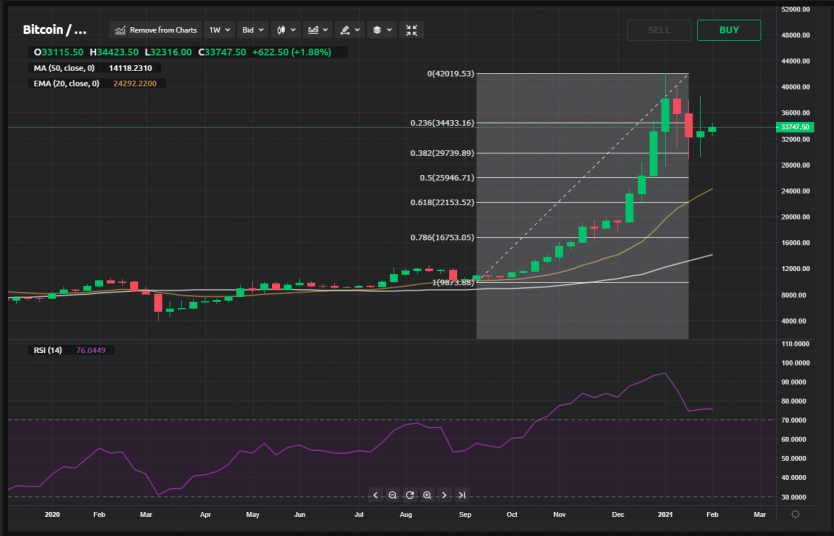 Bitcoin closed last week at $33,125, with a gain of 2.60 per cent. Although the price traded between $38,636.50 and $29,151 during the week, the bears sold at higher levels, and the bulls purchased the dip, forming a Doji candlestick pattern, which shows indecision among the traders about the next directional move.

Both moving averages are sloping up and the relative strength index (RSI) is in the overbought territory, suggesting an advantage to the bulls. If the buyers can push the price above the $38,636.50 to $42,036.45 overhead resistance zone, the next leg of the uptrend could begin, which is likely to push the price to the psychological resistance at $50,000.

However, if the price turns down from the overhead resistance zone once again, then the BTC/USD pair may remain range-bound for a few more days.

This view will invalidate if the bears sink and sustain the price below the 38.2 per cent Fibonacci retracement level at $28,739.89. Below this level, the pair may drop to the 20-week EMA.

The Bitcoin price weekly analysis shows uncertainty about the next directional move. Let’s perform the BTC price analysis of the daily chart to see if it provides any further insight about the next possible move. 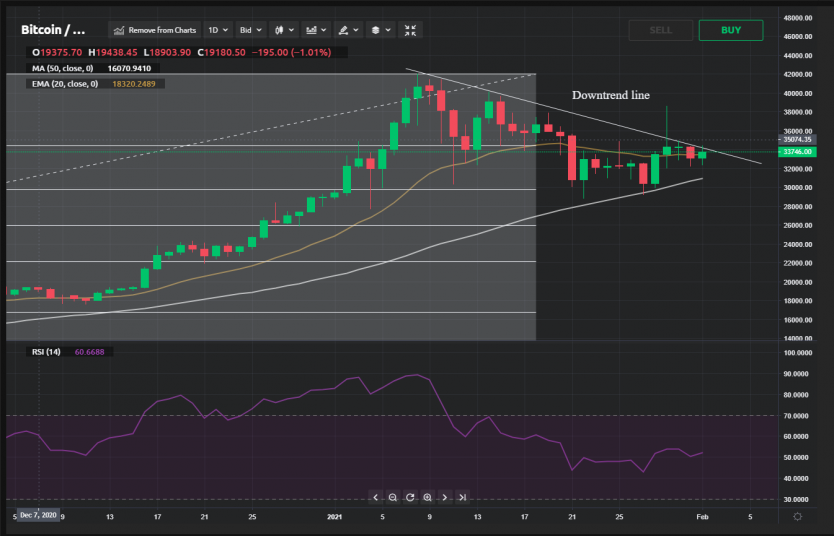 Bitcoin had broken above the downtrend line on January 29, but the bulls could not sustain the higher levels, which suggests traders are booking profits on rallies. However, the failure of the bears to pull the price below the 50-day SMA suggests bulls are accumulating at lower levels.

The price has been trading near the downtrend line for the past three days, which suggests selling dries up at lower levels. If the bulls can propel the price above the downtrend line, the pair could again rally to $38,636.50. A breakout of this resistance could open the doors for a retest of the all-time high.

Conversely, if the price turns down from the current levels and breaks below the 50-day SMA and the $28,800 support zone, it could start a deeper correction. However, the flat 20-day EMA and the RSI near the midpoint suggest the price action could be stuck inside a range for a few more days.

Traders who purchased on the breakout of the downtrend line on January 29,  as suggested in the previous analysis, got an opportunity to earn a quick profit by trailing their stops higher. Even if traders could not book profits on that day, they may hold their positions with the stops placed just below the 50-day SMA.

If the price again rises above the downtrend line, traders may trail the stops higher to lock in the paper profits. If the pair breaks below the 50-day SMA, traders may stay on the sidelines until a bottom is confirmed.