News&Features Analysis Bitcoin price analysis for January 18-24: be prepared for a fall to $30,000

The demand and supply balance dictates the price of any asset class. When the demand exceeds supply, the price is bound to rise. This was the reason for the recent bull run in Bitcoin. Grayscale Investments has seen strong inflows in 2020, starting the year with $2bn in assets under management, which soared to $20.2bn by the end of the year.

To put the numbers in perspective, about 900 Bitcoin are mined each day since Bitcoin’s halving in 2020, but the miners have only been sending about 300 of those Bitcoin to the exchanges since July of last year. However, during that period, Grayscale has purchased roughly 1,200 Bitcoin per day, sucking up the circulating supply.

Several traders built leveraged positions to take advantage of the strong momentum. While the excess leverage acts as fuel on the way up, it becomes a liability when the rally stalls or the price witnesses volatile moves.

Traders face margin calls when the market moves against them and the brokers dump the positions at the market if margin requirements are not met. This intensifies the selling, resulting in a sharp fall. Therefore, until the excess leverage clears from the system, Bitcoin is unlikely to resume its rally.

Let’s do the Bitcoin price trend analysis of the weekly chart to spot the critical levels on the downside where buyers may step in. 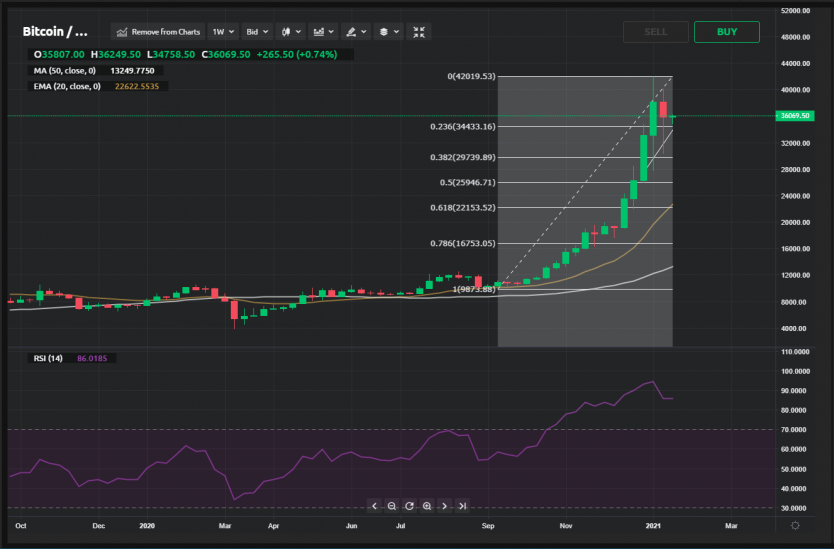 After four consecutive weekly closes in the green, Bitcoin corrected 6.18 per cent to close at $35,804 last week. Although the price had dipped to an intra-week low at $30,300, the long tail on the weekly candlestick shows aggressive buying at lower levels.

However, if the bulls fail to build on the recovery, the bears will grab the opportunity and attempt to deepen the correction. If the bears sink the price below the previous week’s low at $30,300, the aggressive bulls who had purchased last week may close their positions.

After the recent correction, although the Relative Strength Index (RSI) has corrected from its deeply overbought zone, it still remains above 86, indicating the possibility of a consolidation or correction for a few more days.

Contrary to this assumption, if the price turns up from the current levels and rises above $42,036.45, the uptrend could resume with the next target objective at $50,000. However, the likelihood of such a move is low.

The Bitcoin price weekly analysis shows the bulls are unable to hold on to higher levels, which suggests the correction could deepen. Let’s perform the BTC price analysis of the daily chart to spot any bearish patterns. 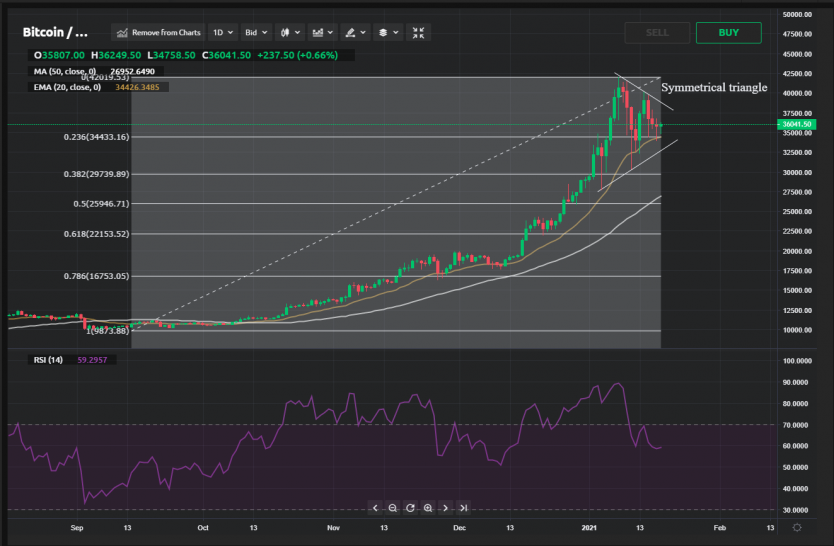 Bitcoin has formed a symmetrical triangle, which generally acts as a continuation pattern. The upsloping moving averages and the RSI in the positive territory suggest the bulls have the upper hand.

If the bears sink the price below the 20-day EMA, a drop to the support line of the triangle is possible. A breakdown and close below the triangle could intensify the selling, resulting in a fall to the 50-day SMA at $26,952. This is an important support to pay attention to because a break below it will signal that the bears are back in the game.

Contrary to this assumption, if the pair rebounds off the 20-day EMA or the support line of the triangle, the bulls will try to drive the price above the triangle. If they succeed, a rally to $42,036.45 is likely. A breakout of this level could open the gates for a rally to $50,000.

Traders who bought near the 20-day EMA as suggested in the previous analysis could have made a quick short-term profit. Although the price has again dipped to the 20-day EMA, the rebound lacks strength.

Therefore, traders may remain on the sidelines until the price breaks out and closes above the triangle.

If the price breaks below the triangle, traders may avoid cherry-picking until Bitcoin confirms a bottom formation.