Bitcoin is in a consolidation and is likely to pick up momentum after it breaks out of it.

The unprecedented economic stimulus and Bitcoin’s halving are driving institutional investors towards Bitcoin. According to recent estimates, Grayscale Investments has purchased 150 per cent of the total Bitcoin mined post-halving. This shows how the scarcity of Bitcoin will quickly come into play and shoot prices higher even if a small percentage of institutional money wants to accumulate in a hurry.

Like Grayscale, other players in the crypto space have also reported an increase in institutional interest. The creator of the popular stock-to-flow price prediction model, PlanB, has updated his model, which predicts a possible rally to $100,000 by 2021.

However, Goldman Sachs is not bullish on Bitcoin as it believes that the largest cryptocurrency is flawed. Hence, it has asked its clients not to buy Bitcoin. While Goldman’s calls move individual stocks in the equity markets, they have not been able to influence the crypto market. In fact, the price of Bitcoin has rallied since Goldman advised not to buy it. This suggests that the crypto community does not value calls to action from investment banks or brokerages. Can Bitcoin extend its up move? Let’s do the Bitcoin price trend analysis to find out.

Bitcoin has been consolidating just below the resistance line of the symmetrical triangle for the past four weeks. This is a positive sign as it shows that bulls are in no hurry to book profits. 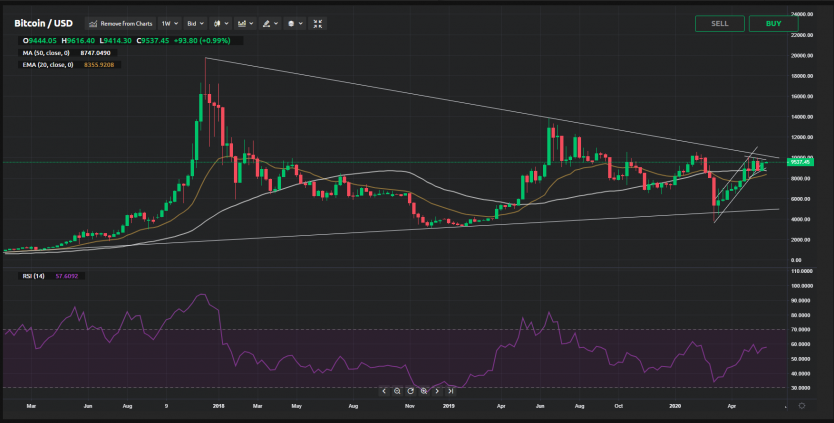 While the 50-week SMA is flat, the 20-week SMA is gradually sloping up and the RSI has been trading in the positive territory for the past few weeks. This suggests that the bulls have the upper hand.

The longer the consolidation, the stronger the eventual breakout could be. If the bulls can propel the price above the large symmetrical triangle, a sustained uptrend is possible. The next target objective on the upside is $14,000.

Conversely, if the BTC to USD pair turns down from the current levels or from the resistance line of the triangle and plunges below $8050.50, the trend will turn in favor of the bears.

Bitcoin’s daily chart shows a symmetrical triangle formation, which usually acts as a continuation pattern. A consolidation near the overhead resistance, after a sharp runup, is a positive sign.

This suggests that the bulls are not booking profits aggressively. Both moving averages are sloping up and the RSI is in the positive territory, which suggests that bulls have the advantage.

If the bulls can propel the largest cryptocurrency above the triangle, the uptrend is likely to resume. The pattern target of a breakout of the symmetrical triangle setup is $11,884.55. However, the bears are unlikely to give up without a fight.

If the price turns down from the current levels and breaks below the 20-day EMA, it will indicate that the uptrend is losing strength. The trend will turn negative on a breakdown of the triangle. In such a case, the pattern target would be $6,865.

How to trade BTC this week