News&Features Analysis Bitcoin price analysis for March 22-28: the coin could start a large move this week

Bitcoin price analysis for March 22-28: the coin could start a large move this week

Traders can keep a close watch on the 20-day EMA because a break below it could signal a correction but if it holds, a retest of the all-time high is possible

Morgan Stanley became the first big US bank to bite the Bitcoin bullet. CNBC reported, citing an internal memo of the investment bank, that its wealthy clients with “an aggressive risk tolerance” could buy Bitcoin from one of the three funds shortlisted by the firm. However, Morgan Stanley is limiting the total Bitcoin allocation to only 2.5 per cent of the total net worth of the investors.

In a separate report, Deutsche Bank said that Bitcoin’s $1trn market capitalisation makes it “too important to ignore.” However, the bank argued that Bitcoin’s daily transactions in US dollars are only a fraction of the business done by yen and GBP daily. Therefore, Bitcoin must transform its potential into results and prove its value to live up to its reputation.

However, it is not that all investment banks have turned favourable to Bitcoin. A Bank of America research report titled "Bitcoin's Dirty Little Secrets", said “a $1bn fresh inflow into Bitcoin may cause CO2 to rise by the equivalent of 1.2mn ICE cars." The analysts said that Bitcoin needs only $93m in net inflows to move its price by one per cent compared to the $1.86bn needed for a similar move in gold.

Investment banks are divided in their approach to Bitcoin. But what does the Bitcoin price trend analysis of the weekly chart project? Let’s find out. 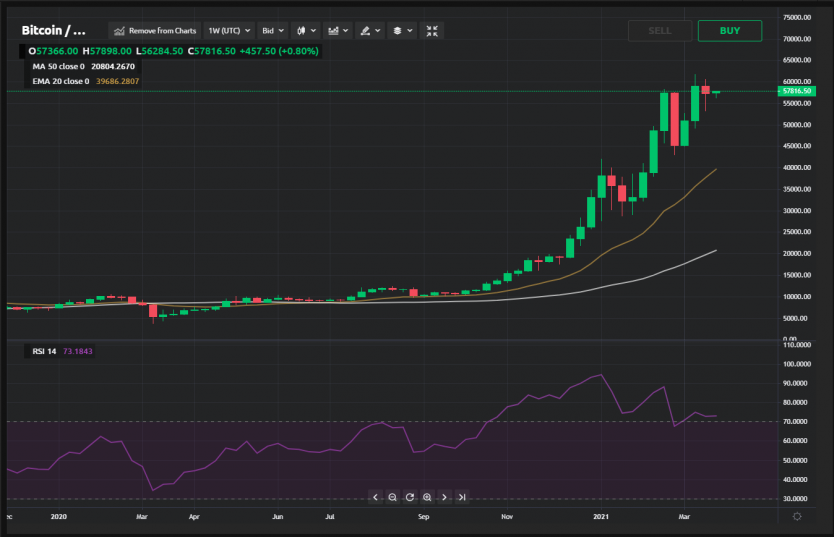 Bitcoin’s price formed an inside week candlestick pattern last week, suggesting indecision among the bulls and the bears. The largest cryptocurrency corrected 2.73 per cent to end the week at $57,359.

The Bitcoin price weekly analysis shows a state of indecision among the bulls and the bears. Let’s perform the BTC price analysis of the daily chart to see if it provides an insight on the next possible move. 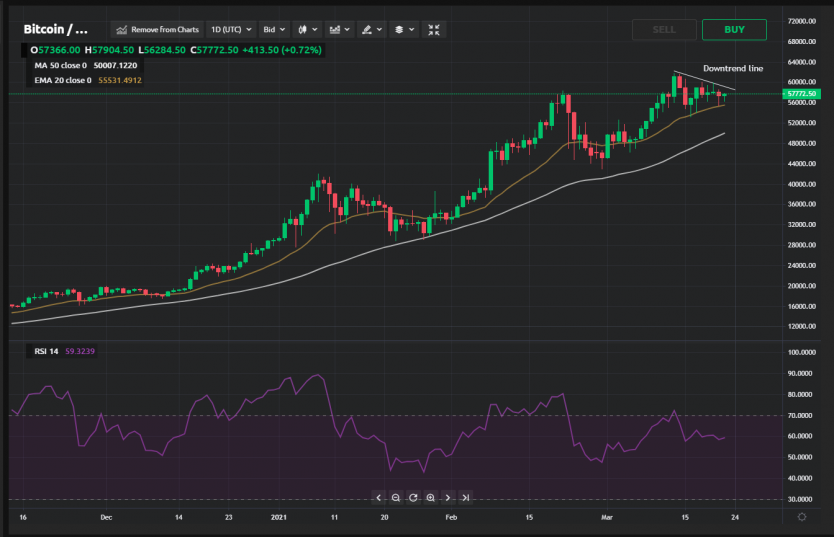 The price action on the daily chart shows that the bulls have not allowed the price to stay below the 20-day EMA, indicating accumulation at lower levels. If the bulls can now propel the price above the downtrend line and the all-time high, the pair could start its uptrend.

On the other hand, if the price turns down from the overhead resistance, the bears will make one more attempt to sink the pair below the 20-day EMA. If they succeed, the pair could drop to the 50-day SMA.

This is an important support to keep an eye on because the bears have not been able to break the price below the 50-day SMA since October 9. Therefore, if the support cracks, it could signal a possible change in trend because several short-term traders may rush to the exit.

Bitcoin could offer a quick trading opportunity to short-term traders who could consider a long position above the downtrend line. This move could retest the all-time high. However, this is a risky trade, hence the position size could be 50 per cent of usual.

Alternatively, if the bears sink the price below the 20-day EMA, traders may stay on the sidelines until a bottom is confirmed.