News&Features Analysis Bitcoin price analysis for March 29-April 4: the coin is getting ready for an explosive move this week

Bitcoin price analysis for March 29-April 4: the coin is getting ready for an explosive move this week

Bitcoin is coiling in a tight range, which could result in a sharp move this week. If the breakout happens to the upside, a new all-time high is likely

Bitcoin has been struggling to rise above $60,000 for the past few days, indicating exhaustion. However, this does not mean the HODLers are selling out of their position just yet. Glassnode data shows that the Bitcoin supply that was moved more than two years ago has reached a three-month low, indicating that long-term investors are not tempted to sell at the current levels.

This has resulted in a cap on the supply available in the market but the demand, especially from institutional investors, has continued to rise. Galaxy Digital founder Michael Novogratz in a recent interview at Reuters Digital Assets Week projected massive demand of nearly $1trn to come from the wealthy baby boomers.

Mike McGlone, senior commodity strategist at Bloomberg Intelligence, tweeted on March 26 that Bitcoin is on its way to becoming a global digital reserve asset and if Bitcoin mirrors its rise seen in 2013 and 2017, then a rally to $400,000 in 2021 is possible.

While the demand side picture looks bullish, Bridgewater Associates founder Ray Dalio sounded a warning that the US government may ban Bitcoin the way it had outlawed people from holding gold in the 1930s.

Let’s perform the Bitcoin trend analysis of the weekly chart to find out the path of least resistance. 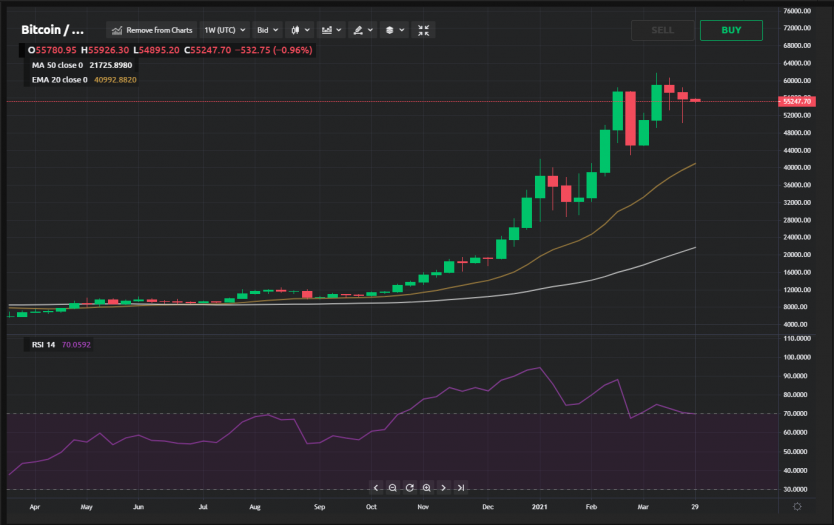 Bitcoin’s price corrected for the second consecutive week but the bears could not sustain the lower levels as seen from the long tail on the weekly candlestick. This suggests the bulls are accumulating on dips.

While the upsloping moving averages suggest the bulls are in command, the negative divergence on the relative strength index (RSI) indicates weakening momentum.

The Bitcoin price weekly analysis shows the bulls are accumulating on dips but can they sustain their demand at higher levels? Let’s perform the BTC price analysis of the daily chart to find out. 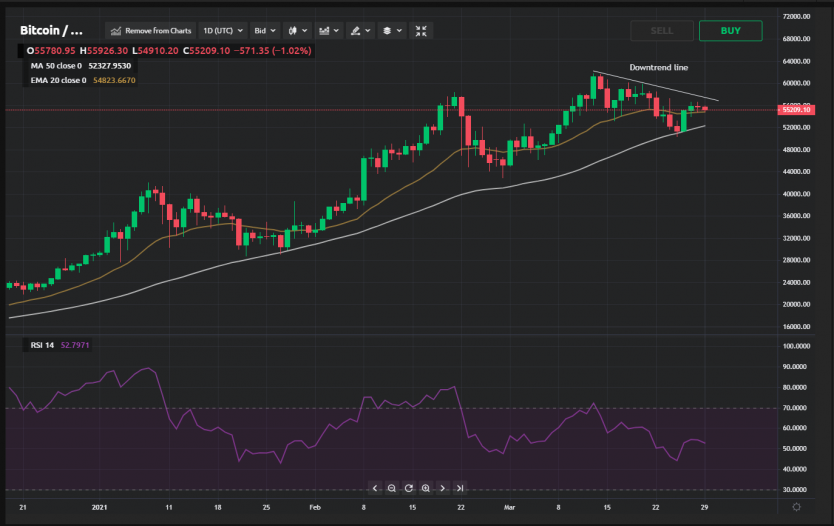 Bitcoin rebounded sharply off the 50-day SMA on March 26, indicating the bulls are defending this support aggressively. However, the Doji candlestick pattern near the downtrend line shows hesitation among the bulls to buy at higher levels.

The flat 20-day EMA and the RSI just above the midpoint suggest a balance between supply and demand. If the bears sink the price below the 20-day EMA, the pair could again challenge the critical support at the 50-day SMA.

If this support cracks, the short-term traders may dump their positions, which could pull the price down to the next important support of $42,979.50.

Contrary to this assumption, if the bulls can drive the price above the downtrend line, the pair may rise to the all-time high at $61,777.85.

Bitcoin is currently in a no-trade zone but if it breaks above the downtrend line, it could rise to $60,000 and then to $61,777.85. Short-term traders could attempt to ride this possible rally with a close stop-loss.

However, if the 50-day SMA cracks, traders may remain on the sidelines as it could result in a deeper correction to $42,979.50.