Bitcoin price analysis for November 23-29: the coin could correct sharply after hitting a new all-time high

Data from Bitcointreasuries shows that companies now hold about 4.54 per cent of the current Bitcoin supply. This shows that Bitcoin is now finding a place in the treasuries along with gold and cash as companies believe in the narrative that Bitcoin is digital gold. This could limit the downside in Bitcoin’s price because every dip may be viewed as a buying opportunity.

Ricardo Salinas Pliego, the second-wealthiest man in Mexico, is the latest billionaire who has revealed exposure to Bitcoin. In a tweet, Pliego said he holds 10 per cent of his liquid portfolio in Bitcoin.

BlackRock's chief investment officer of fixed income, Rick Rieder, said in an interview with CNBC, Bitcoin is “here to stay” as it “is so much more functional than passing a bar of gold around.” These statements show that institutional investors have become more favourable to Bitcoin and this could result in a strong inflow of funds into cryptocurrencies.

Let’s do the Bitcoin price trend analysis of the weekly chart to ascertain whether the rally will continue or a correction could be around the corner? 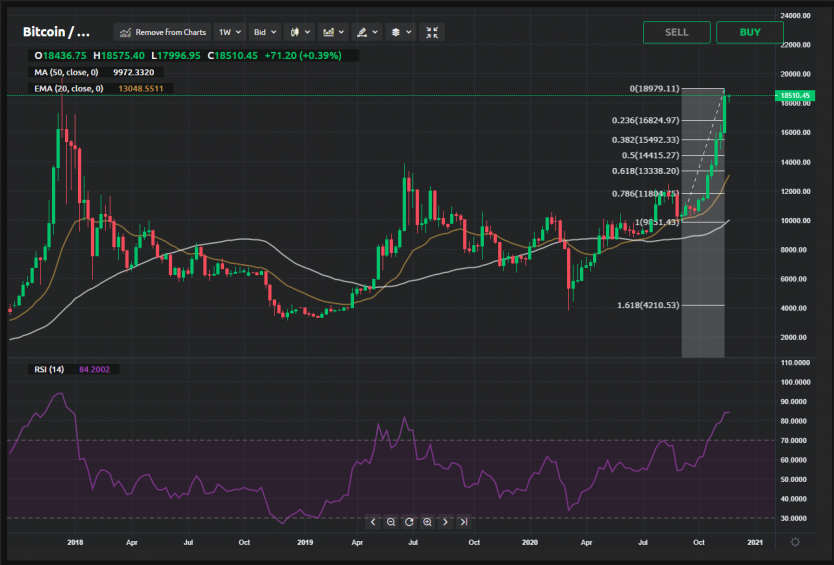 The sharp rally of the past seven weeks has pushed the RSI deep into the overbought territory. This increases the risk of a correction in the BTC/USD pair. Generally, vertical rallies are followed by waterfall declines.

The first support on the downside is the 38.2 per cent Fibonacci retracement level at $15,492. If the price rebounds off this support, it will suggest that bulls are accumulating aggressively on dips. The buyers will then try to resume the uptrend and drive the price to a new all-time high.

Contrary to this assumption, if the bulls propel Bitcoin’s price to a new all-time high in the current leg of the up-move, then the possibility of the pair forming a blow-off top increases as traders who have been sitting on the sidelines could jump in due to FOMO.

The Bitcoin price weekly analysis shows that the bulls are in control but the overbought reading on the RSI suggests that a correction or consolidation could be around the corner.

Let’s do the BTC price analysis of the daily chart to spot the support levels where buyers may step in to arrest the next correction when it happens. 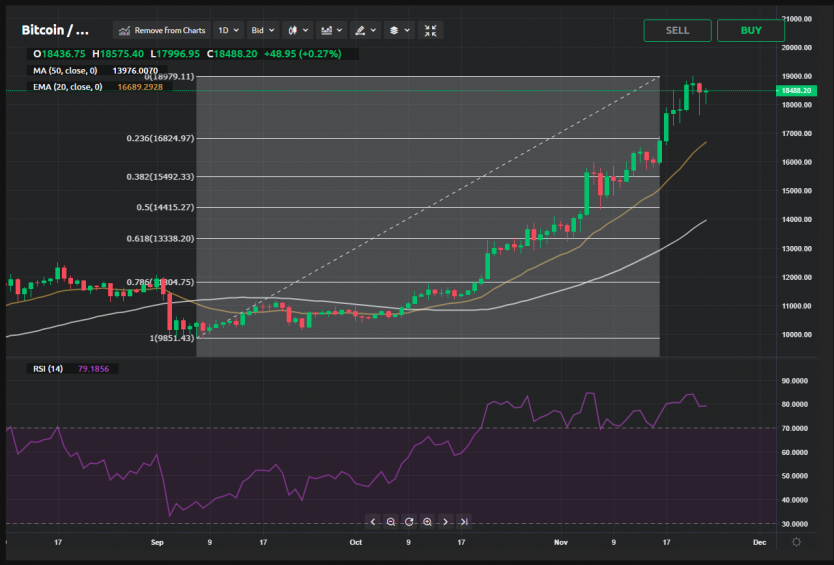 Bitcoin’s price formed a Doji candlestick pattern on November 21, which suggests indecision among the bulls and the bears. Although the bears attempted to start a correction on November 22, the bulls aggressively purchased the intraday dips.

This shows that the bulls are not waiting for a deep correction to buy. Currently, the price has formed an inside day candlestick pattern, which again shows indecision between the buyers and sellers.

A break below $17,621.50 could start a correction as the aggressive bulls who purchased the dips on November 22 may cover their positions. The first support is at the 20-day EMA but if the bulls fail to defend this level, the selling could intensify.

This view will be invalidated if the bulls push the price above $19,000. In such a case, the pair may rally to a new all-time high. The $20,000 level may act as a psychological resistance but once it is scaled, the momentum could pick up.

Although Bitcoin remains in a strong uptrend, the risk to reward ratio is now skewed to the downside. Hence, positional traders could wait on the sidelines until the price corrects and forms a higher floor.

The momentum traders however could continue to look for buying opportunities on dips and breakouts with a tight stop-loss. Traders may consider reducing their position size as the risk is high.