News&Features Analysis Bitcoin price analysis for October 26-November 1: coin could rally to $14,000 in the short-term

Bitcoin price analysis for October 26-November 1: coin could rally to $14,000 in the short-term

The rally could happen as long as the price stays above the $12,500 support

PayPal announced that its customers will be able to buy, hold and sell cryptocurrencies on its apps and also shop at its 26 million merchants worldwide using cryptocurrencies. This move by PayPal will increase Bitcoin’s user base and help take the crypto markets mainstream.

“I wouldn’t be surprised if, in the next six to 12 months, we see PayPal launching its own digital currency similar to a digital dollar that we see in many payments companies.”

Galaxy Digital CEO Mike Novogratz believes that the financial institutions cannot ignore PayPal’s crypto foray. In an interview with CNBC, Novogratz said that banks such as Morgan Stanley, Goldman Sachs or Bank of America, may be forced to explore options to “engage” in cryptocurrencies.

The recent fundamental development has been bullish for Bitcoin’s price but will the momentum sustain? Let’s do the Bitcoin price trend analysis of the weekly chart to spot the levels that might act as a hurdle on the way up. 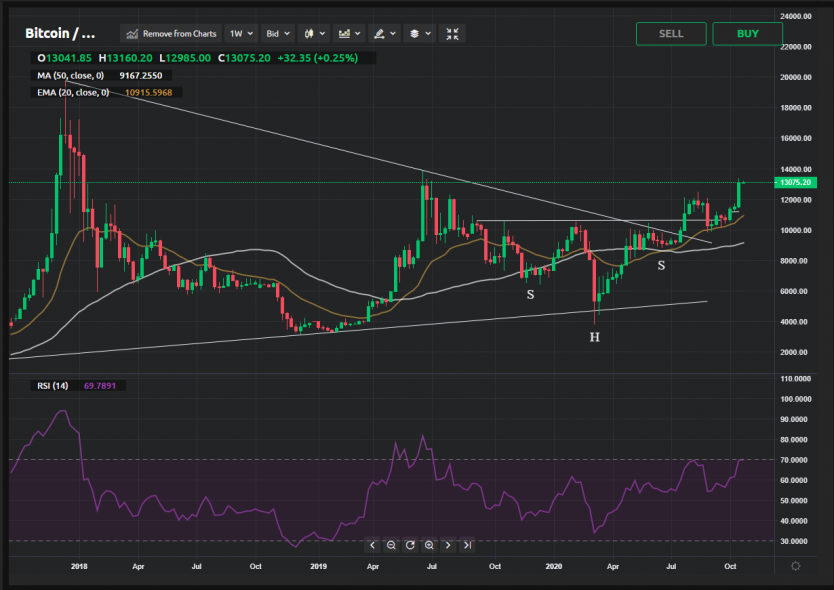 Bitcoin reacted favorably to the PayPal news and soared 13.27 per cent last week to close at $13,042.85, as a lot of pent up demand came gushing in the crypto markets.

With last week’s rally, the BTC/USD pair is set to challenge the June 2019 highs at $13,839.90. The 20-week EMA is sloping up and the RSI is close to the overbought zone, suggesting an advantage to the bulls.

If the buyers can drive the price above this resistance, the pair could extend its rally to $17,327, which is the target objective of the breakout from the inverse head-and-shoulders pattern.

However, the bears are likely to defend the $13,839.90 resistance. If the pair turns around sharply from the current levels or the overhead resistance and plummets below $11,400, it will suggest that the bears are aggressively shorting at higher levels.

The Bitcoin price weekly analysis shows that momentum favours the bulls but the bears may mount a stiff resistance close to $14,000 levels. Let’s do the BTC price analysis of the daily chart to see if it also projects a similar view. 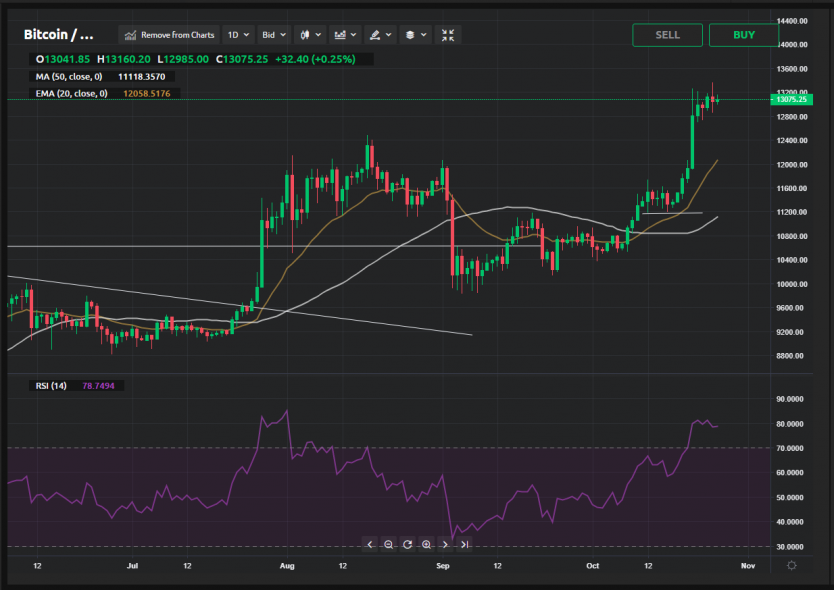 Bitcoin surged and broke above several overhead resistance levels on October 21. This rally has pushed the RSI deep into the overbought territory.

In early-May and early-August, similar levels on the RSI had resulted in a sharp correction, hence, traders should remain cautious.

However, if the price again fails to sustain above the zone, it will suggest selling at higher levels. The selling could intensify if the bears sink the pair below $12,694.50.

The next support on the downside is the 20-day EMA. A break below this support may signal that bears are back in action.

Traders who had entered long positions as suggested in an earlier analysis are sitting on huge profits.

If Bitcoin again struggles to sustain above $13,200, it will suggest strong selling at higher levels. Therefore, traders can book partial profits and trail the rest of the position with a suitable stop-loss.

Paper profits can quickly vanish as crypto markets can turn around in a jiffy. Hence, traders should always consider protecting their gains with a stop-loss.

Bitcoin to US Dollar
Trader sentiment (on leverage)
Daily change
16951.8
Low: 16916.8
High: 17350.2
Sell 16936.20 Buy 16936.35
Sell 16936.20 Buy 16936.35
The material provided on this website is for information purposes only and should not be regarded as investment research or investment advice. Any opinion that may be provided on this page is a subjective point of view of the author and does not constitute a recommendation by Currency Com Bel LLC or its partners. We do not make any endorsements or warranty on the accuracy or completeness of the information that is provided on this page. By relying on the information on this page, you acknowledge that you are acting knowingly and independently and that you accept all the risks involved.
Bitcoin Cryptocurrency
АWin-Win
referral programme
Learn more