Bitcoin, the world’s first and largest cryptocurrency sank by more than 6% on Wednesday evening, having only just set a new all-time high of $68,789.63 after the highest US consumer price index in 30 years.

Although something of a correction is by no means a rarity following a new record high, the rapid sell-off is partly thought to have been triggered by conflicting reports concerning the state of the Evergrande Group.

The Chinese giant, the most indebted real estate developer in the world with liabilities of more than $300bn (£224bn), failed to pay a series of interest payments on dollar-denominated bonds last October.

With just under a month to settle each payment following the initial deadline, November has seen prolonged anxiety as to whether Evergrande will fail to make good on its obligations, default and cause wider damage to investor sentiment both in China and globally.

On Wednesday, only minutes after Evergrande was due to have to paid another interest payment, Deutsche Markt Screening Agentur, an independent German data service firm, invested in the bonds in question, announced that it was preparing bankruptcy proceedings against the company and called on all bond investor to join it.

This was soon picked up and disseminated by the Associated Press news agency. However, three quarters of an hour following the deadline, Bloomberg reported that Evergrande had not in fact missed the payment and was not in default.

A spokesperson for Clearstream, an international clearing house, stated that it had received overdue interest payments on three dollar bonds issued by the real estate firm.

Bitcoin, whose short-term price can be said to be often affected by fear, uncertainty and doubt, sank by 6% amid the confusion from just over $68,500 to just over $64,000. The cryptocurrency saw its market capitalisation fall by as much as $80bn.

Having once again avoided catastrophe, Evergrande stock closed Thursday up 6.7% at HKD2.53, 82% below the level at which it began 2021. 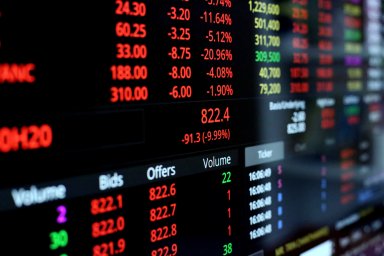