The crypto markets bounced back sharply last week on favourable news on the regulation front. Market participants weighed a sigh of relief when the Federal Reserve chairman, Jerome Powell, speaking during the oversight of the Treasury Department’s and Federal Reserve’s pandemic response hearing on Thursday, said he has “no intention to ban” cryptocurrencies.

In other bullish news, the chair of the Securities and Exchange Commission (SEC), Gary Gensler, reaffirmed his support for approving bitcoin exchange-traded funds (ETFs) that would invest in bitcoin futures contracts instead of taking direct bitcoin exposure.

Another factor that may be supporting the rebound in cryptocurrencies is the seasonality effect. According to Bybt data, bitcoin has declined in September in seven out of the past nine years but October has been a period of turnaround, with six positive monthly closes in the last eight years.

Ulrik K.Lykke, founder of the crypto assets hedge fund ARK36, sid, according to Reuters: "Q4 has often seen strong performances and the expectation the trend will continue this year can become a self-fulfilling prophecy. It is possible that we will see new all-time highs in Q4, especially that on-chain data, particularly in the case of bitcoin, seem to indicate a potential for a strong bull market continuation."

Could Bitcoin extend its recovery in the next few days or will higher levels attract aggressive selling by bears? Read our bitcoin price trend analysis to find out. 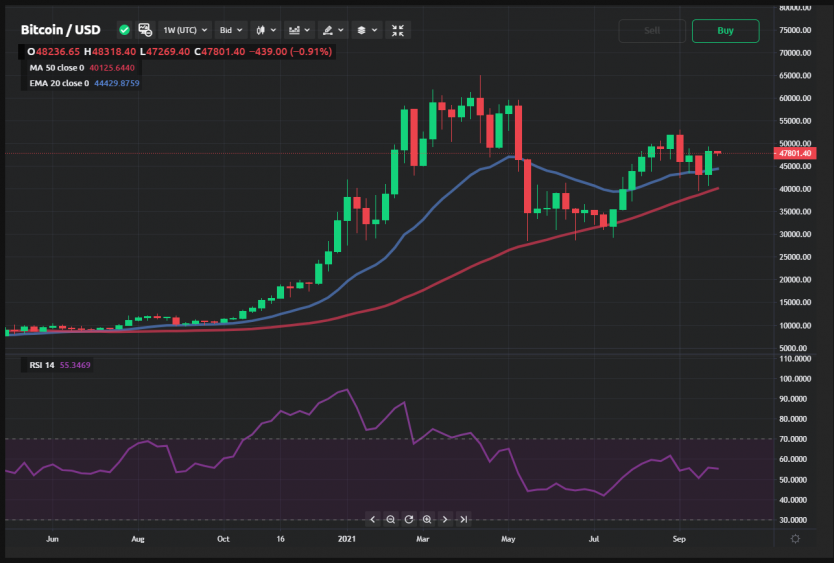 Both moving averages are sloping up and the relative strength index (RSI) is in the positive zone, suggesting that bulls have the upper hand. The buyers will now try to clear the overhead hurdle at $52,953.85.

If they manage to do that, the pair could pick up momentum and rally to $60,000 where the bears may again mount a stiff resistance. However, if bulls push the price above this level, a retest of the all-time high at $64,919.10 is likely.

This positive view will be invalidated if the price turns down and plummets below the 50-week SMA. Such a move could result in panic selling and may drag the pair down to $36,500.

The Bitcoin price weekly analysis shows the bulls are back in command and the $50,000 resistance may be under threat. 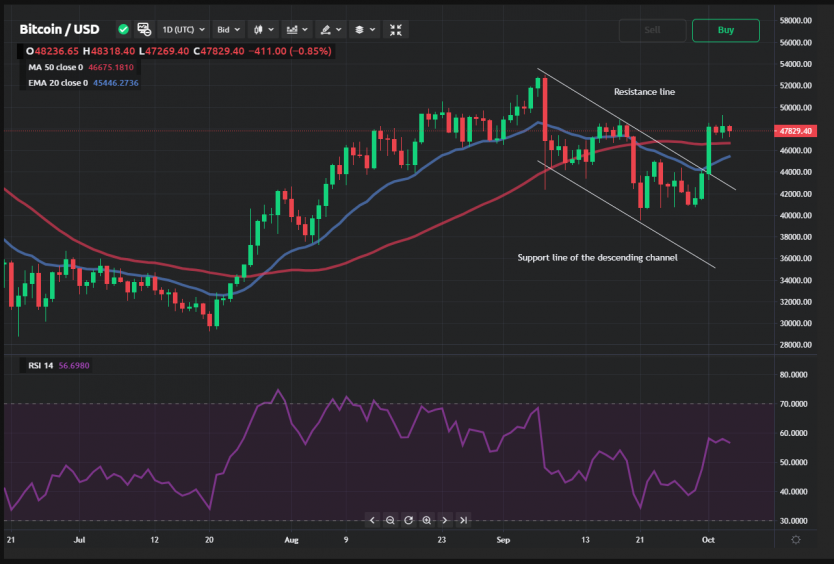 Bitcoin’s price broke above the descending channel pattern and the moving averages on 1 October, indicating that the correction could be over.

Although bears are defending the psychological level at $50,000, the positive sign is that bulls have not allowed the price to dip below the 50-day SMA. This suggests that bulls are not rushing to book profits on their recent gains.

The 20-day exponential moving average (EMA) has turned up and the RSI is in positive territory, signalling an advantage to the bulls. If buyers sustain the price above the 50-day SMA, the possibility of a break above $50,000 increases.

Contrary to this assumption, if the price breaks below the moving averages, it will suggest that bears are aggressively defending the $50,000 resistance. The pair could then drop to $44,000 and later to $40,000.

Bitcoin could pick up momentum above $50,000 and rise to $52,953.85 where the bears may again try to stall the up-move. If bulls overpower the bears, the pair could resume the uptrend. The bears will have to pull the price below the 20-day EMA to gain the upper hand.