Learn to trade The basics Digital dollar vs Bitcoin: which is better?

Digital dollar vs Bitcoin: which is better?

Here, we take a look at the pros and cons of each – and ask whether the two assets can co-exist

One of the biggest battles of the 2020s could shape up to be digital dollars vs Bitcoin. The US Federal Reserve has announced that it is exploring the possibility of launching its own CBDC – an asset that would undoubtedly end up competing with the world’s biggest cryptocurrency. But whereas China is putting the finishing touches to its digital yuan, we might have to wait a while to see a digital dollar come to fruition. Late last year, US Treasury secretary Steven Mnuchin said he doesn’t see the need for one until 2025 at the earliest.

There are so many questions that need to be answered. Can a digital dollar and Bitcoin co-exist? What benefits would a CBDC offer to US consumers? Would this spell the end of the humble banknote? Here, we’ll compare these two assets side by side – and examine the pros and cons of each.

Digital dollar or Bitcoin: how they compare 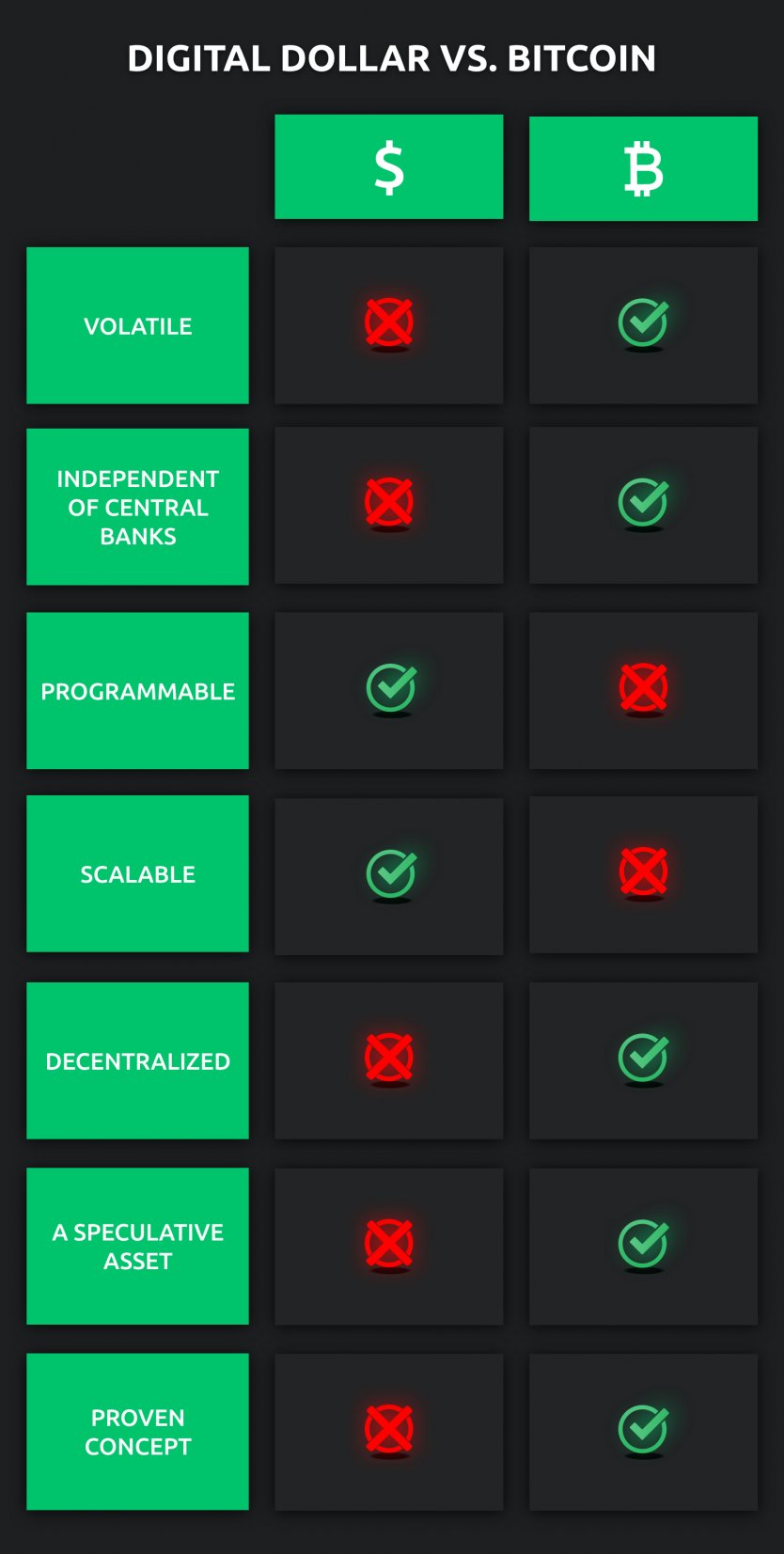 It’s a bit difficult to weigh up a digital dollar vs Bitcoin right now. The Fed’s exploration of what a CBDC could offer is entirely hypothetical, meaning that it’s difficult to know what form such an asset will take. Will it be a wholesale CBDC that’s designed for use by financial institutions and markets, or a retail CBDC geared towards the public at large?

For the sake of simplicity, we’re going to imagine that the digital dollar is being rolled out to consumers across the country.

One of the biggest advantages of a digital dollar could be the fact that it’ll be much more stable than BTC could ever be – a cryptocurrency that’s renowned for wild swings that can wipe hundreds of dollars off its value within minutes. Many retailers and merchants have been somewhat reluctant to accept or use crypto because of this volatility.

Another thing that separates the digital dollar and Bitcoin is the degree of centralisation. Bitcoin was designed to be an ecosystem that banks couldn’t touch – it was designed by Satoshi Nakamoto in the immediate aftermath of the 2007 financial crisis. But a CBDC, by its very definition, would be controlled and issued by a central bank. One of the main concerns surrounding digitised versions of fiat is whether or not this will affect privacy. Officials at the People’s Bank of China have publicly said that the digital yuan is designed to deliver “controllable anonymity” – effectively suggesting that transactions may be monitored. Put it this way: it might be difficult for a digital dollar to achieve the same degree of anonymity that a $20 bill note does. (That said, Bitcoin transactions are fairly traceable anyway, with transactions duly recorded on a public blockchain.)

There are some factors in the digital dollar vs Bitcoin debate where a CBDC could come out on top. One of them concerns scalability, and the speed with which transactions are completed. On October 5, a total of 295,000 Bitcoin transactions were confirmed, which roughly works out at a throughput of 3.4 transactions per second. It doesn’t take someone with a PhD in economics to know that this simply wouldn’t cut it for a digital dollar. Figures suggest that Visa alone has the capacity to achieve more than 65,000 transactions per second – a powerful illustration of the robust system that a CBDC would need to achieve.

But that brings us swiftly on to our next problem with digital dollars and Bitcoin. Despite all of the flaws associated with BTC, there is one thing going for it: this cryptocurrency is a proven concept that has been going strong all the way since 2009. The technology that underpins a CBDC – whether it’s a digital dollar, digital euro or digital yuan – will need to be scalable, robust and secure, otherwise it could undermine confidence.

The coronavirus pandemic has hastened America’s determination to launch a digital dollar. Why? Because when stimulus checks were being sent across the country, many were left unclaimed because the people they were meant to help didn’t have a bank account.

As the white paper of the Digital Dollar Project notes:

“A 2017 FDIC survey found that roughly 14 million American adults lack a bank account – a figure that became all the more important during the Covid-19 pandemic when the US government struggled to distribute emergency relief funds to many of these individuals. The Project believes that lower system costs and digital wallets tied to the custody of tokenized digital dollars may hold advantages over traditional bank accounts in terms of expanding access to underserved populations.”

It’s also fair to say that some consumers spent the $1,200 in ways that they shouldn’t have done. All of this brings us to the intriguing concept of “programmable money”. One thing that Bitcoin and cash have in common is that there are few limitations to how it can be used – you can find a merchant, a product you like, and purchase it.

Some advocates of CBDCs believe that a digital dollar could ensure that money that’s given to a member of the public can only be spent on certain things. For example, a person who is receiving a welfare payment will only be able to use their digital dollars to buy food, medicine or to cover their rent.

But others go further – and envisage a world where the government could become much more efficient. In future, stimulus funds given to the public could be automatically decided based on the person’s income or where they live. It could also eliminate some of the headaches associated with taxation for businesses, as this would automatically be deducted by the IRS whenever a transaction takes place.

All of this is assuming that the technology works as promised. But there’s one thing that a digital dollar can never take away from Bitcoin: its fixed supply. Only 21 million BTC will ever exist – and 18.5 million of them exist already. A digital dollar, under the control of the Federal Reserve, would still be susceptible to quantitative easing – an act that sees billions of dollars of new money printed, watering down the value of the cash already in circulation.

FURTHER READING: Central bank digital currencies: why you might end up missing cash 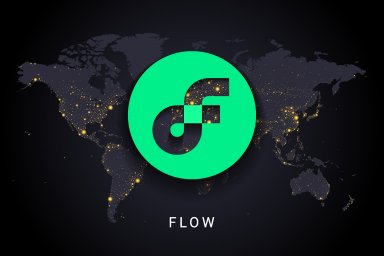 FLOW price prediction: What’s next for the FLOW coin? 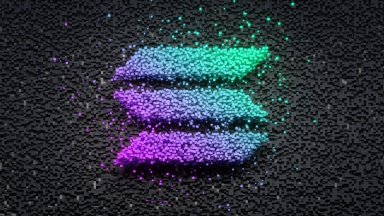 Solana (SOL) price analysis: Get ready for a big move after the hack 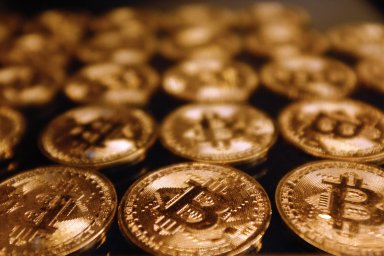 Pictet Group: No place for crypto in private banking