The overall NFT market jumped in value to over $17bn in 2021, according to a new report from NFT data company Nonfungible.com.

However, two key indicators reflected a shift in the market, with financial speculation – that is, buying NFTs to sell them – prevailing over simple collecting, creating an inflationary trend.

As average NFT prices rose 16-fold from around $49 to over $807, the average number of transactions declined over the period by around 5%, with the average length of ownership dropping by 69% in 2021.

“At the end of 2021, we are up against a market that was more than ever subjected to excessive speculation, with new, inexperienced buyers and risk-taking increasingly less restrained. Throw into the mix an almost infinite proliferation of projects with relatively low added value, contributing to market saturation and raising suspicion about the real added value and potential of NFTs,” said the researchers.

It came as no surprise that profits on secondary sales increased to a whopping $5bn, as losses on resales also rose to $667m, up from around $1.9m in the previous year.

Despite an ongoing proliferation of new networks and technological solutions, Ethereum remained by far the most important blockchain for NFT transactions in 2021, with 76% of the entire market.

According to the report, the Ronin blockchain, which powers the Axie Infinity NFT game platform, also became a key player over the course of the year, representing 18% of the market.

Flow, the blockchain that powers the NBA TopShot and MotoGP NFT platforms, and new arrival Immutable X, which is behind Gods Unchained, Guild of Guardians and TikTok NFTs, represented 6% of the overall volume, which may increase during 2022.

Rarible price prediction: What’s next for NFT marketplace?
The material provided on this website is for information purposes only and should not be regarded as investment research or investment advice. Any opinion that may be provided on this page is a subjective point of view of the author and does not constitute a recommendation by Currency Com or its partners. We do not make any endorsements or warranty on the accuracy or completeness of the information that is provided on this page. By relying on the information on this page, you acknowledge that you are acting knowingly and independently and that you accept all the risks involved.
Blockchain NFTs
АWin-Win
referral programme
Learn more

Harry and Meghan could enter the metaverse 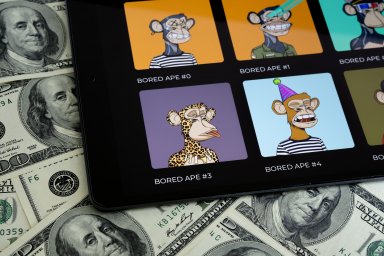