Learn to trade The basics What is Uniswap? Your ultimate guide

What is Uniswap? Your ultimate guide

In the space of two short years, Uniswap has exploded in popularity – becoming one of the world’s biggest decentralised exchanges. Developed by Hayden Adams, the protocol’s debut was perfectly timed for the dramatic explosion in DeFi projects… most of which are based on the Ethereum blockchain.

But what is Uniswap, and how do UNI tokens work? Buckle in for a simple guide to this platform, which has been aiming to position itself as a rival to centralised platforms.

Since digital assets exploded in popularity, they’ve tended to be bought and sold in a centralised environment where there’s a middleman who handles the transactions. The benefits here can include fast settlement times and healthy levels of liquidity thanks to the high trading volumes that the biggest exchanges enjoy.

Uniswap takes a different approach because users can complete their trades without going through an intermediary. This trustless approach champions decentralisation and can help prevent censorship – meaning there’s nothing stopping someone from executing a sale. Uniswap also does away with the concept of Know Your Customer checks, delivering greater levels of anonymity. The only thing that will be on display is your public address.

Other benefits can include greater levels of security, especially given how the smart contracts that Uniswap relies upon have undergone rigorous auditing measures. The cost of completing transactions can also be substantially lower than a mainstream crypto exchange – perfect for budget-conscious traders. (One downside to Uniswap concerns the fact that gas fees on the Ethereum network have been surging of late, but that’s a topic that we’ll cover in another article.)

Uniswap also makes it far easier to bring a new ERC-20 token to market – and the entrepreneurs behind them won’t have to go through the often expensive process of listing it on a centralised exchange. Trading can commence instantly once this new token has been paired with Ether or the Uniswap token. Critics argue that this simplified process can have risks, because it makes it easier for scam projects to seep into the market.

How to use Uniswap

In essence, using Uniswap means that you are swapping a token. Let’s imagine that you have already purchased some Ether from another platform, and now you’re looking to gain exposure to an ERC-20 token that you believe has great potential. By connecting your MetaMask wallet to Uniswap, you can input the value of the ETH you want to exchange, and select the desired token from a dropdown menu (or search for a particularly niche one). The swap can then commence once you’ve previewed the transaction and confirmed it in your wallet – and will be finalised as soon as it’s been verified on the Ethereum blockchain.

Here’s a brief word about the technical elements that are happening behind the scenes at Uniswap. At the heart of all of these swaps are liquidity pools that usually pair smaller tokens with Ether or a major stablecoin like USDT, DAI or USDC. Liquidity providers are responsible for funding these pools by depositing these two tokens in equal amounts.

All of this creates a balancing act to ensure that one side of a Uniswap liquidity pool isn’t bigger than the other. Larger pools can help alleviate this problem, because it becomes much easier to absorb the shock of a high-value transaction.

How does the Uniswap token work?

Uniswap didn’t have a native token when it first launched, but all of this changed last September when the UNI token launched.

What is your sentiment on UNI/USD?

Why not give UNI/USD a try?

A total of one billion UNI tokens were created, and about 40 per cent of this supply is gradually going to make its way into the market over a four-year period.

One particularly attention-grabbing element of the UNI token was related to an airdrop that was completed for all users who had previously used the decentralised exchange. Eligible wallets were rewarded with 400 UNI, which was worth $1,200 when it initially launched. Although this would have resulted in a healthy payday at the time, holding on to these tokens would have proven even more lucrative. In mid-March, a single UNI token hit highs of $35.86 – meaning the overall value of the haul surged to about $15,000. Not bad at all. 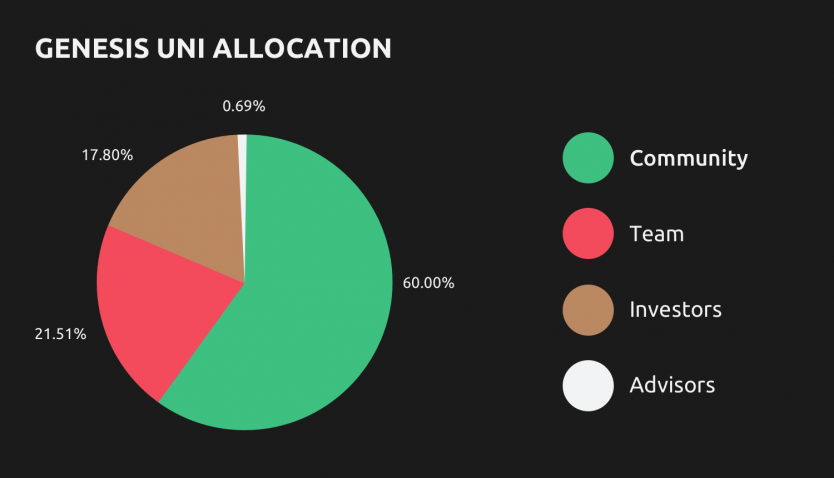 The airdrop wasn’t without criticism. A total of 21.5 per cent of Uniswap’s new token was earmarked for team members and future employees – and a further 17.8 per cent to some of the early VCs who funded Uniswap in its early days. Some, such as Glassnode, described this as an “immense” allocation. Sharing a graphic that showed the distribution of these tokens, the on-chain analytics platform wrote:

“The pie chart feels more reminiscent of a 2017-style ICO than a 2020-style fair launch, which is one of several reasons why the narrative of a shift toward decentralized community ownership feels somewhat disingenuous.”

What is Uniswap planning in future?

Right now, one of the biggest challenges facing Uniswap is the rise of rival decentralised exchanges such as PancakeSwap, which is based on Binance Smart Chain. A flurry of DeFi projects have recently flocked to BSC – attracted by the prospect of lower fees and less congestion than the Ethereum blockchain – but there are concerns about higher levels of centralisation on this rival network.

Undeterred, Uniswap is now pushing ahead with a flurry of improvements in a much-anticipated V3 release. It’s highly likely that the teasers from the team behind this decentralised exchange have helped contribute to the recent all-time highs that the UNI token has seen.

One headline announcement that’s expected is the introduction of a Layer 2 scaling solution, something that’s seen as crucial to ensure that DeFi trading remains affordable on the platform. At present, many crypto enthusiasts claim they have been priced out of using Uniswap because of the gas fees that are attached to transactions.