A company profile of Adidas, one of the world’s most recognised sports brands

The Adidas group is the world’s second largest sportswear manufacturer and  includes the Reebok brand, a share of the German football club Bayern München, and Runtastic, an Austrian fitness technology company. It also owns the CrossFit and Les Mills brands.

The company was founded by Adolf Dassler and his brother Rudolf in 1924.

In the 1940s, the feuding brothers split the business into two separate companies: Adidas and Puma.

The Dassler shoe, one of the first football boots, was considered one of the most innovative of its kind.

Adidas’s footwear became mainstream after it was worn and endorsed by the US rap band Run-DMC.

Adidas nearly went bankrupt in the early 1990s, but a series of sponsorship and partnership deals with celebrities and sportsmen and women enabled it to claw back profits.

Its nearest rival is the US sportswear multinational Nike. 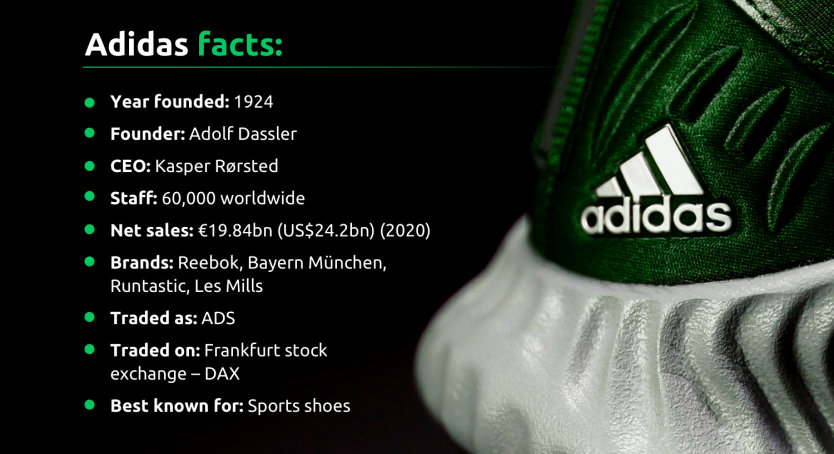 What is your sentiment on ADS.DE?

Why not give ADS.DE a try?

Adidas’s three-stripe logo was adopted in 1952 after it bought the branding from the Finnish athletic footwear brand Karhu Sports. It cost Adidas two bottles of whiskey and the equivalent of €1,600 (US$1,951).

This branding was replaced by the three bars logo, designed by then creative director Peter Moore in 1997.

Adidas bought Reebok, which was founded in Bolton in the UK, in 1958 for just over €3bn.

Reebok, which is now based in the US, has struggled to gain market share from its rivals and was put up for sale by Adidas in 2020. It is expected to be sold for under €2bn (US$2.4bn).

In the spring of 2021, Adidas announced a tie-up with the US watchmaker Timex. The agreement means Timex Group will design, manufacture and distribute watches worldwide under the Adidas Originals brand.

What is Adidas known for?

Adidas is owned by its shareholders, having listed in 1995 on the DAX, an index of the 30 biggest German companies trading on the Frankfurt Stock Exchange.

Where is Adidas located?

The company’s headquarters are in Herzogenaurach, Germany.

ADS stock – how can I trade in Adidas shares?

If you’re feeling positive about Adidas’s prospects, you might want to consider investing in the company.

Adidas stock can be purchased on a share dealing website outright, or through Currency.com in the form of a tokenised asset.

A tokenised asset allows you to buy Adidas shares using a blockchain token. Currency.com can provide you with dozens of technical indicators and analytical tools, as well as real-time price alerts and cutting-edge charts.