Amazon shares retraced in the middle of July after running up to all-time highs earlier in the month. The company is scheduled to release its Q2 financial results on July 30, which should be a catalyst for higher share prices. Let’s see what the technicals say.

Amazon is scheduled to release Q2 financial results on July 30, which should provide additional momentum in August. Amazon is expected to earn $1.34 per share on $80.84bn in revenues. This compares to $6.25 in earnings per share in the prior quarter. Growth estimates are expected to decline by approximately 75 per cent.

The seasonals are mixed and volatility has surged

Ahead of the Q2 results, implied volatility of Amazon’s shares has sharply moved higher. It rose to 70, nearly touching the highs seen in March at 79. The Amazon VIX (it measures the implied volatility of the “at the money” strike price on Amazon) settled in near 55, which is still well above the average during 2019 at 19. 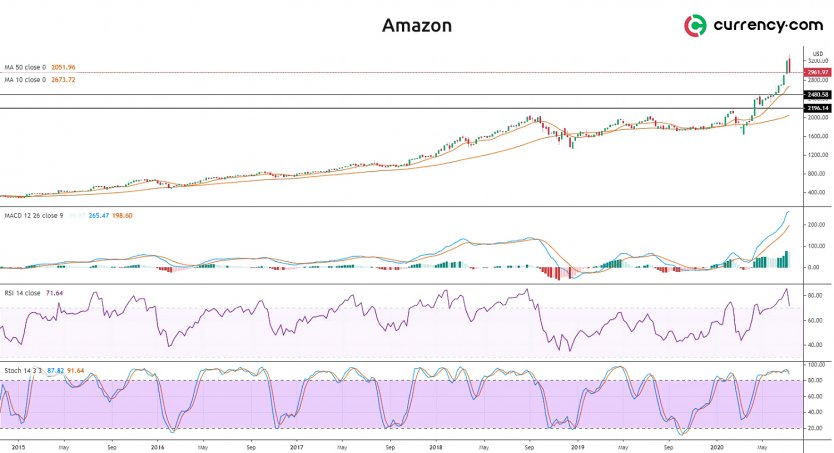 During mid-July, Amazon generated a sharp reversal but made a weekly higher high and a higher low which reflects an uptrend. Support on the shares is seen near the 10-week moving average at 2,673. Resistance is seen near the all-time highs at 3,344.

The relative strength index reversed lower after hitting a reading of 87, equal to the highest level on the RSI over the past 10-years. The current reading on the RSI is 72, which is still above the overbought trigger level of 70 and could foreshadow a correction. Medium-term momentum remains positive as the MACD histogram is printing in the black with an upward sloping trajectory which points to higher prices.

The upshot is that Amazon shares are still in an uptrend. If the shares break through the 10-week moving average, investors could take pause.

Medium-term momentum remains positive, and prices are likely to whipsaw ahead of Q2 earnings results on July 30. Implied volatility is elevated which should generate whipsaw price action but could provide a very good entry-level.

Historically Amazon has experienced mixed returns in August and this will likely be a function of its financial results. Look for Amazon to find support near the 10-week moving average and rally into August.