News&Features Analysis Amazon stock analysis: the price could rise but with more volatility

Amazon stock analysis: the price could rise but with more volatility

Amazon shares have contracted more than 14 per cent during September after rising a robust 89 per cent by the end of August 2020. The shares have been on a tear as the company outperformed during the spread of Covid-19, providing next-day delivery as well as cloud computing. Implied volatility on Amazon shares has been rising in September after declining through mid-July and August.

Seasonally, Amazon shares generally are mixed in October but outperform in November.

Amazon shares were upgraded to an outperform by equity analyst Mark Shmulik at Bernstein. Not only did Shmulik increase his rating on the company but he also increased its price target to $3,400 per share. The company believes that Amazon will continue to gain traction even after the pandemic as the key choice for shoppers. It also believes that Amazon will continue to expand its revenue streams into advertising as well as cloud networks.

The seasonals are mixed 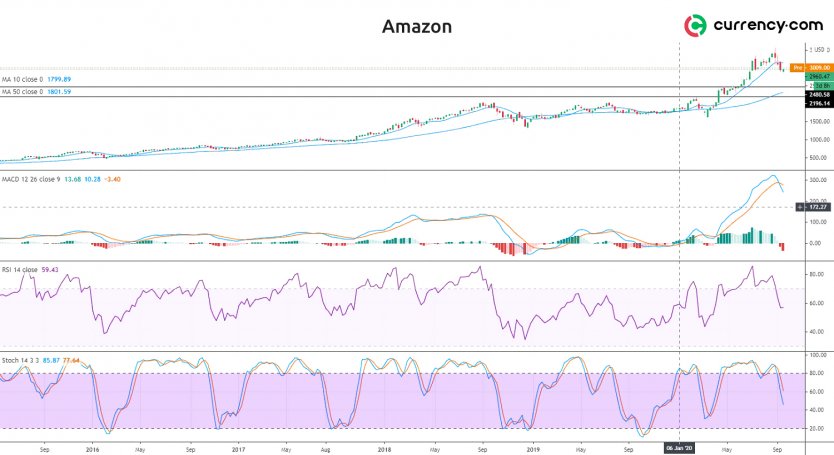 Amazon shares: how to trade them

Amazon shares have pulled back, providing an opportunity for investors to buy at lower levels. Bernstein has upgraded the shares and the price target, providing additional investor confidence.

Seasonally, the returns that Amazon provides in October are mixed. While the AMZN stock analysis is negative, prices are likely to find a floor in September or early October and then rise throughout the balance of the month. This upward movement will come with additional volatility ahead of the US presidential election.

FURTHER READING: Shopify stock forecast: should you add it to your basket?