The best cryptocurrency of 2020 revealed

What was the best cryptocurrency in 2020? Well, in terms of percentage growth, you might be surprised to hear that it wasn’t Bitcoin or Ether

With a dramatic flash crash in March and a long-awaited Bitcoin halving in May, 2020 certainly was a rollercoaster ride for the digital assets space. But what was the best cryptocurrency of 2020? Here, we rank the top 10 coins by market cap based on how they performed over this 12-month period. Although all of them ended the year in positive territory, it’s fair to say that some assets performed a lot better than others.

The best-performing crypto across the whole of the year was Chainlink – up by a staggering 540 per cent as it surged from $1.76 to $11.27. Ether stole most of the headlines as a top-performing crypto too following its staggering 482 per cent jump from $129.19 to $752.86. This was substantially more than Bitcoin, which rose by 300.7 per cent and set a new all-time high in the process. XRP had been among one of the top performing cryptocurrencies as late as mid-December, after prices practically quadrupled, but it crashed and ended the year up by a disappointing 9.9 per cent.

Here’s our infographic recapping the best cryptos of 2020: 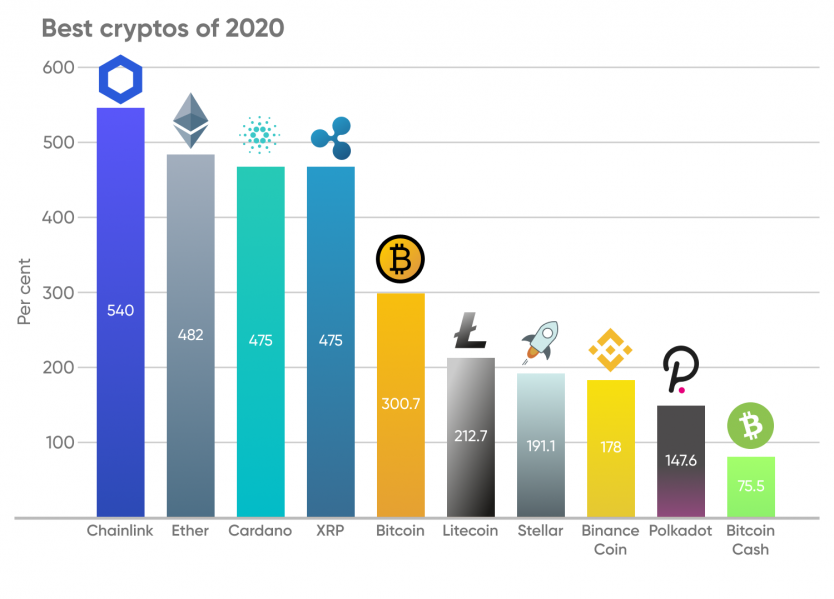 The stories behind the best-performing cryptocurrencies of 2020

Without a doubt, the best cryptocurrency for investment in 2020 was LINK. The value of Chainlink is based on how it provides decentralised oracles that connect blockchains to dependable real-world data – including to centralised exchanges, wallets and DeFi protocols. The project even managed to win plaudits from the World Economic Forum. Crucially, this infrastructure has also been embraced beyond the Ethereum ecosystem, delivering some much-needed interoperability in the process. And it’s worth noting that 2020 doesn’t tell the whole story for this crypto’s performance. After wrapping up New Year’s Eve at $11.27, prices doubled yet again in the first few weeks of 2021 – reaching $23.68.

Another strong candidate for the best cryptocurrency of 2020 was Ether. There were several factors that led to this altcoin’s success – not least the sudden explosion in the popularity of decentralised finance protocols, many of which were built on the Ethereum blockchain. As the year drew to a close, excitement was also growing about ETH 2.0, which will see the network make the switch from a Proof-of-Work to a Proof-of-Stake consensus mechanism. We’re just three weeks into January and prices have already almost doubled since then, with ETH managing to reach a long-awaited all-time high beyond $1,432.88. Some pundits believe this could be the best cryptocurrency to invest in for 2021 as institutions start to turn their attention away from Bitcoin.

Other strong cryptocurrency performances came from Polkadot – a blockchain that was described by Bloomberg as an “Ethereum killer” back in October. This ecosystem is focused on interoperability and ensuring that networks can talk to one another. But another unique selling point is how developers can launch their own blockchains in the space of a few minutes – setting their own block confirmation times and transaction fees in the process. Polkadot is also tipped to be a major digital asset in 2021 because of how it can handle a greater number of transactions than Ethereum at present. In early January, DOT managed to knock XRP off the coveted number four spot of the world’s biggest coins by market cap.

If we’re speaking purely in financial terms, Bitcoin wins the day as the best crypto of 2020 with its 300 per cent increase. This took BTC’s price from a starting point of $7,195 on January 1 to highs of $28,837 as the year drew to a close. And of course, if you’ve been following the headlines in recent weeks, you’ll know that the bull run was far from over – with record highs of $42,000 being set as January got under way.

Institutional interest helped Bitcoin cement its reputation as one of the best performing cryptocurrencies. Some analysts believe the surge is drastically different to the 2017 bull run, and that we could see BTC enter six figures within a matter of months. Others claim that it’s a bubble that’s fit to burst, meaning attention will turn to altcoins this year. Only time will tell who is right.

The worst-performing cryptocurrency in the top 10 was XRP. It started the year at $0.1929 and only managed to end it at $0.2120, resulting in a meagre boost of 9.9 per cent. But this doesn’t tell the whole story. As 2020 was drawing to a close, a sudden boost in this coin’s value had taken it to $0.76 – prompting enthusiasts to claim that $1 was in sight. The surge was derailed by the SEC announcing that it was rolling out a lawsuit against Ripple over claims that XRP was an unregistered security when it was sold to investors.

What is the best-performing cryptocurrency of 2021 going to be? By the looks of things, Ethereum is managing to continue the theme of outperforming Bitcoin so far. Meaningfully breaking through $1,500 could also result in a healthy surge as traders embark on a long-awaited period of price discovery.

Bitcoin is also under pressure to return to the $40,000 mark after cooling slightly in recent weeks. The likes of JPMorgan Chase believe the cryptocurrency needs to bounce back sooner rather than later, or “trend-following” investors may decide to exit their positions in a hurry. And there’s still a lot of intrigue over Polkadot following its triple-digit gains in the space of a week. Then again, we’ve seen that before with XRP – and look what happened next.

Other themes to look out for as 2021 gets under way are whether European Central Bank President Christine Lagarde will follow through with her demands for Bitcoin to be regulated globally. There will be a nervous wait to see how the SEC’s legal action against Ripple plays out, and the CME Group is also gearing up to launch ETH futures in February. Say what you like about the crypto industry, but it’s never dull.