Bitcoin Cash price predictions paint a mixed picture during a time of heightened volatility in the crypto markets. Some believe that BCH is vastly undervalued – especially if this altcoin is compared with its big brother Bitcoin. Others making Bitcoin Cash predictions argue this cryptocurrency may suffer from a lack of attention from investors, with institutions focused on BTC and developers continuing to build on the Ethereum blockchain.

Roger Ver is one of the crypto heavyweights who can always be relied upon for an upbeat Bitcoin Cash forecast. He firmly believes that it’s disingenuous to compare BTC and BCH – asserting that they have entirely different purposes in an expansive crypto ecosystem:

And is Bitcoin Cash a good investment? For Ver, the answer is a resounding yes – and he believes that BCH is behind the curve of BTC when it comes to price growth. In another tweet emphasising his belief in this altcoin, he added:

The challenge for Bitcoin Cash projections currently centres on how BCH has been sliding down the rankings – overtaken by the likes of Polkadot and Cardano. There has been a lot of excitement surrounding DOT after it was touted as an “Ethereum killer” – amid claims this cryptocurrency could serve as a more attractive home for decentralised finance protocols.

But it’s fair to say that Bitcoin Cash isn’t designed to compete with DOT, ADA, or even BTC. Instead, BCH is designed to allow people to send money around the world inexpensively – an antidote to remittance services that charge sky-high fees, and blockchains such as Ethereum which suffer from congestion that causes transaction costs to surge.

Bitcoin Cash price predictions were given a boost after PayPal announced that it would support this digital asset last year – and in 2021, merchants will be able to accept this crypto asset from millions of shoppers. All of this could enhance adoption, and enable BCH to win round large masses of consumers who have had little experience with crypto to date.

Another positive milestone for the Bitcoin Cash price forecast came when the entrepreneur Kim Dotcom, who was behind the controversial website MegaUpload, gave this ringing endorsement to BCH earlier in January:

Dotcom, who now resides in New Zealand, also announced that he is going to be accepting Bitcoin Cash as a payment method at his new business venture.

Roger Ver was among those who praised Dotcom for this move, adding:

“When you look at interest in BTC these days, a lot of it comes in trying to chase its historic investment gains. As long as the price keeps going up, there is going to be a lot of interest. But what happens when people want to start actually using it to pay for things?”

Is Bitcoin Cash a good investment? 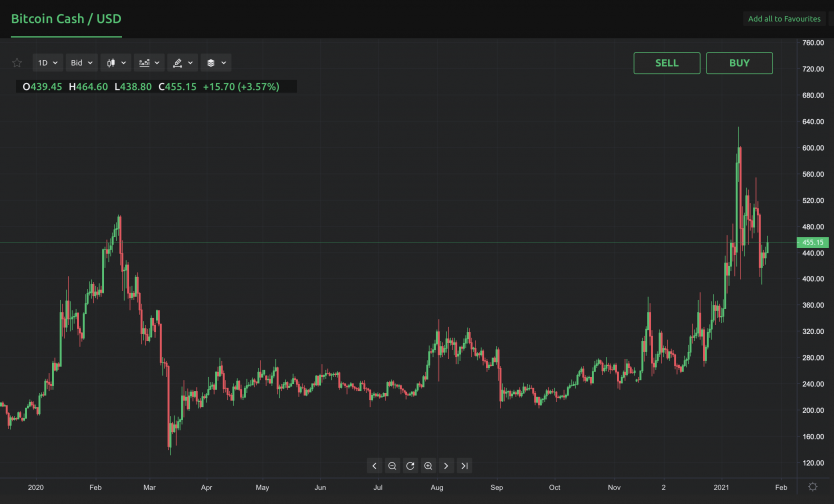 What is your sentiment on BCH/USD?

Why not give BCH/USD a try?

When establishing BCH price forecasts for the coming 12 months, it’s worth looking at how the altcoin has performed over the past year. Bitcoin Cash has practically come full circle – after hitting highs of $455 in February 2020, BCH cooled dramatically and spent many months trading in the mid-$200s. The cryptocurrency did benefit from the frenzy that gripped the crypto markets over the New Year and briefly spiked at $629.80 before cooling to the mid-$400s.

It’s important to note that Bitcoin Cash suffered quite a lot of drama as 2020 drew to a close, caused by a fractious hard fork. This came after a group of developers called for a network update that would result in eight per cent of newly mined BCH being set aside. A rival group in the community who referred to themselves as Bitcoin Cash Node opted to remove this line from their source code – creating two versions of the network.

But here’s the challenge with upbeat BCH price predictions: there is a risk that this altcoin could undercut its main selling point of being a medium of exchange. As one chief economist at UBS recently noted in a video about crypto, a major downside about these digital assets is how their value can fluctuate wildly from one day to the next – and if you’re hoping to pop to the shops to buy a bag of potatoes, you’ll probably be put off from using a cryptocurrency if an item that costs $1 in cash terms one month ends up costing $2.20 the next.

We’ve heard the pros and cons when it comes to is Bitcoin Cash a good investment, so let’s wrap up with a look at how BCH price predictions are shaping up for the next 12 months.

LongForecast.com’s Bitcoin Cash price prediction indicates that there’s only some limited upside to BCH in the year ahead. The website anticipates that we could see 2021 highs of $579 per coin at May’s close – with an intramonth high of about $620. This latter figure would represent a surge of about 36.2 per cent from current levels. Prices are then expected to cool – ending the year at $444, down about 2.41 per cent.

At present, the Bitcoin Cash price forecast for 2022 is looking rather downbeat, the website added. Prices will stand at $373 by the end of January next year, plumping to depths of $239 by August, before recovering slightly to $423.

There’s one unknown quantity that could affect Bitcoin Cash’s value going forwards: how extensively this cryptocurrency is used by the PayPal community. Given how this fintech giant has more than 300 million users, support for BCH is a significant milestone. With a lower price tag than Bitcoin and Ethereum offer, and more of an emphasis on mainstream payments than these two major cryptocurrencies, BCH could have an opportunity to secure market share from consumers who aren’t interested in holding digital assets for speculative purposes.

A common trend during crypto bull runs sees investors treat Bitcoin as a gateway to the industry – acquiring this digital asset first before diversifying their portfolio and snapping up coins with a smaller market cap. 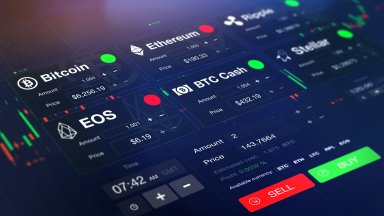 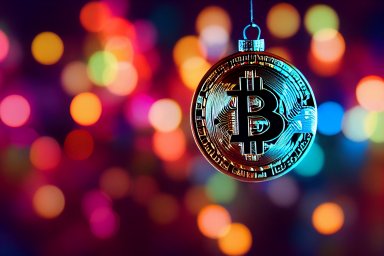