If bitcoin breaks the 20-day EMA, it will indicate that short-term selling pressure has reduced

Bitcoin held the $30,000 level on 26 June, but strategists are unconvinced about any turnaround. Analysts at JPMorgan Chase & Co said on 25 June that blockchain data pointed to recent cryptocurrency sales being made to cover losses and that “there is likely still an overhang of underwater positions which need to be cleared through the market”.

But things are not all gloomy. They added that bitcoin appears “to be beginning the process of healing”.

On 27 June, Mexico’s third-richest man and a staunch bitcoin bull, Ricardo Salinas Pliego, reiterated his view that bitcoin is the “new gold”. He’s working to make his Banco Azteca the nation’s first bank to accept bitcoin.

But Peter Schiff, chairman of precious metals dealer SchiffGold and a vocal opponent of bitcoin, believes the largest cryptocurrency will break the $30,000 support and head lower to $20,000.

Another bearish voice is Guggenheim Partners chief investment officer Scott Minerd, who expects bitcoin to drop to $15,000. In an interview with CNBC, Minerd said $10,000 may be the real bottom for bitcoin but that looked extreme, so he would stick with $15,000. He also said bitcoin may consolidate in a range for a couple of years before starting the next bull run.

With analysts divided over bitcoin’s future, what should traders do? Read our bitcoin price trend analysis to find out. 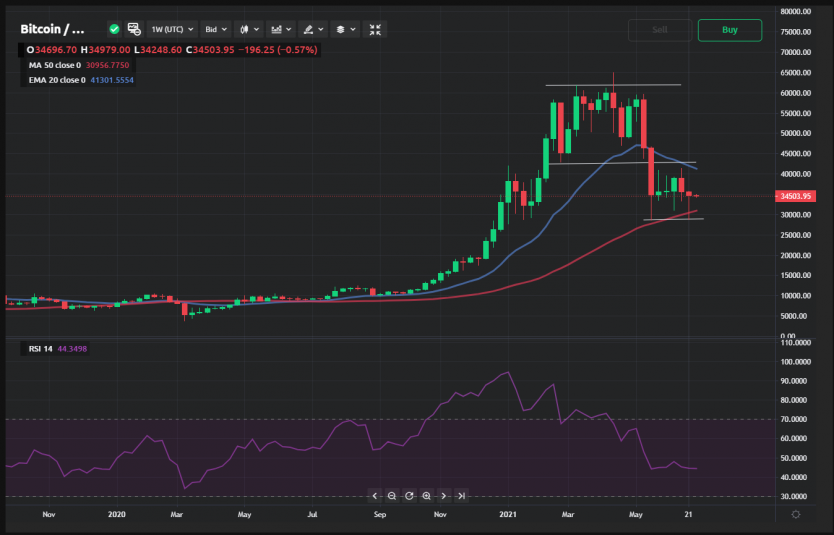 Bulls are aggressively defending the zone between the 50-week SMA and $28,639.70. But the downsloping 20-week exponential moving average (EMA) and the relative strength index (RSI) are in negative territory, which suggests bears are winning.

If the price turns down from the 20-week EMA, bears will make one more attempt to sink the pair below $28,639.70. If they succeed, the pair could start the next leg of the downtrend that could reach $20,000.

This negative view won’t pan out if the bulls push and sustain the price above the 20-week EMA – a move that would suggest bulls have absorbed the selling and a new uptrend is likely to begin.

The bitcoin price weekly analysis shows strong buying on dips to the $28,639.70 support.

Will range-bound action continue or is a breakout likely? Let’s perform the BTC price analysis of the daily chart to find out. 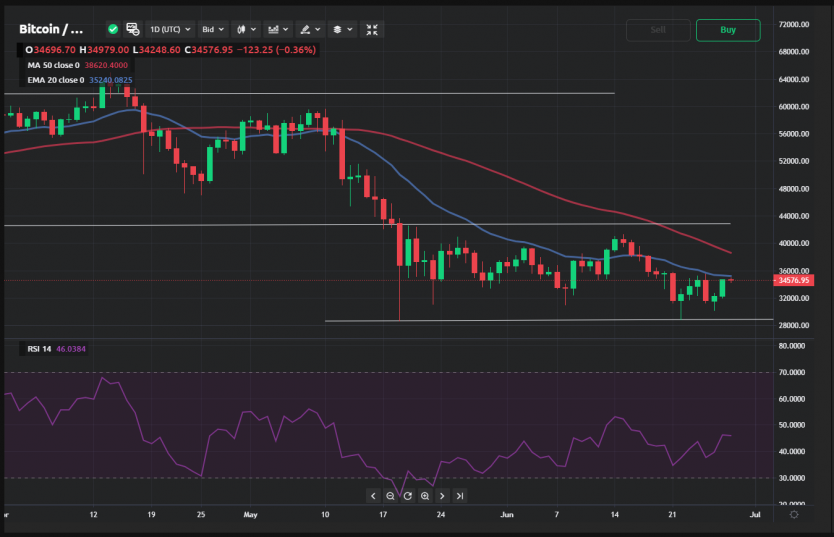 Bitcoin’s price has been trading below the 20-day EMA for the past few days but bears haven’t been able to break the critical support of $28,639.70. This suggests that bulls are accumulating at lower levels.

The price action of the past few days has led to a positive divergence on the RSI, indicating that selling pressure may be reducing. If buyers push the price above the 20-day EMA, the pair will challenge the 50-day SMA.

A breakout and close above this resistance will clear the path for a rally to $42,553.25. This level is likely to act as stiff resistance. If the price turns down from this resistance but stays above the 20-day EMA, it will suggest that sentiment has turned positive, enhancing prospects of a breakout and close above $42,553.25. Conversely, if the price turns down and plummets below $28,639.70, selling could intensify.

Bitcoin is range-bound between $28,639.70 and $42,553.25. Usually, traders consider buying on a rebound off the support and closing the position near the resistance. Buying should generally be avoided when the price is in the middle of the range as it does not create a good risk to reward ratio.

Bitcoin vs Bitcoin Cash vs Bitcoin SV: The ultimate guide
The material provided on this website is for information purposes only and should not be regarded as investment research or investment advice. Any opinion that may be provided on this page is a subjective point of view of the author and does not constitute a recommendation by Currency Com Bel LLC or its partners. We do not make any endorsements or warranty on the accuracy or completeness of the information that is provided on this page. By relying on the information on this page, you acknowledge that you are acting knowingly and independently and that you accept all the risks involved.
АWin-Win
referral programme
Learn more