Bitcoin is likely to remain range-bound for the next few days before resuming its uptrend.

After weeks of range-bound trading, Bitcoin made a decisive breakout last week, which shows renewed buying interest among traders. Max Keiser of the Keiser report tweeted that Bitcoin can now rally to $28,000 and then to 6-figures.

Oki Matsumoto, CEO of Monex Group, a parent company of Japanese crypto exchange Coincheck, said that after missing the rally in gold, several traders are buying Bitcoin as they believe that the uptrend in digital gold is still in its early days.

Bitcoin’s price will continue to benefit from the unprecedented monetary and fiscal stimulus measures taken by several nations across the globe. However, a vertical rally similar to the 2017 bull run is unlikely.

Intermittent pullbacks, similar to the one seen on August 2 is possible. Has this fall changed the trend? Let’s do the Bitcoin price trend analysis of both the weekly chart and the daily chart to spot the path of least resistance. 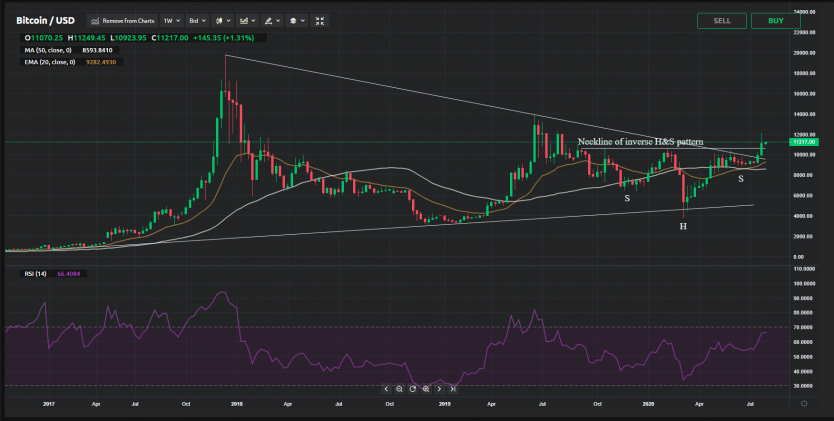 Bitcoin rallied 11.36 per cent last week and in doing so, it broke out of the neckline of the inverse head and shoulders pattern. This bullish setup has a target objective of $17,323.

The 20-week EMA is sloping up and the RSI is close to the overbought zone, which suggests that bulls have the upper hand.

However, the bears are unlikely to give up without a fight. The BTC to USD pair closed last week at $11,071.65, well below its intra-week highs of $12,137.90, which shows that bears are selling at higher levels.

The Bitcoin price weekly analysis shows that the bulls have the upper hand but higher levels are attracting selling by the bears. Let’s do the BTC price analysis of the daily chart to identify the critical levels to watch out for. 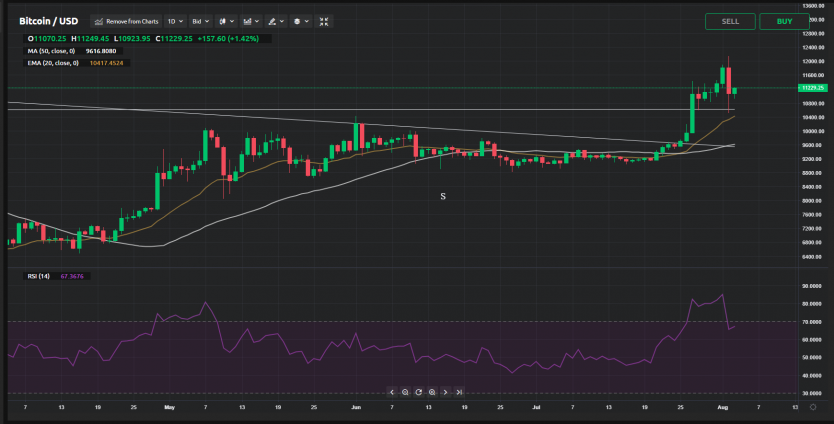 The current leg of the up move started on July 25, with the breakout from the resistance line of the large symmetrical triangle. The momentum picked up after that and Bitcoin hit an intraday high of $12,137.90 on August 2.

This strong rally had pushed the RSI deep into the overbought territory, which suggested that the market was getting overheated in the short-term.

This attracted profit booking by some short-term traders, which pulled the price down to $10,502.50 on August 2 and formed an outside day candlestick pattern. Sometimes, this pattern indicates a reversal, hence, traders should be cautious.

In an uptrend, the bulls purchase the dips to the 20-day EMA, hence, it acts as a strong support. If the bears sink the pair below this support, then it will be the first indication that bulls are losing their grip.

Below the 20-day EMA, the next support is at $10,000. If this support also cracks, it will be a huge negative as that could result in liquidation by the bulls.

Last week, Bitcoin’s price action played out as suggested in the previous analysis. However, after the large outside day candlestick pattern on August 2, Bitcoin is likely to consolidate in a tight range for the next few days as the bulls and the bears attempt to establish their dominance.

The traders can wait for the consolidation to end before entering long positions. A break above $12,137.90 will signal resumption of the uptrend with the next target at $13,000 and then $14,000. Traders should always protect their positions with a suitable stop-loss and trail them higher to lock in the paper profits.