News&Features Analysis Bitcoin price analysis for January 11-17: a short-term top may be in place

Bitcoin price analysis for January 11-17: a short-term top may be in place

If Bitcoin breaks below the 20-day EMA, it could signal a possible trend change

Bitcoin quickly covered the distance from $20,000 on December 16 to an all-time high of $41,959.63 on January 8. This sharp rise shows strong institutional interest. Grayscale Investments CEO Michael Sonnenshein said in an interview with Bloomberg that pension endowments and other institutions have joined the hedge funds in buying Bitcoin.

While institutions have been accumulating, the Bitcoin miners are using the recent rise to lighten their holdings. CryptoQuant data shows that the Miner Position Index has reached levels last seen in July 2019, which resulted in a sharp correction.

Another group that has been selling is the mega-whales, according to analysts at Material Indicators. Along with them, Bitcoin whales from South Korea may also be selling actively as seen from the multiple $100m deposits in the exchanges, which is usually considered as an intent to sell.

If Bitcoin has to sustain its uptrend, fresh money will have to enter at lower levels and absorb the selling. But if that does not happen, several institutional investors who had purchased closer to or below $20,000 may be tempted to lighten their positions. That could increase the selling pressure, resulting in a sharp fall.

Is the current pullback the start of a deeper correction or is this fall likely to be purchased? Let’s do the Bitcoin price trend analysis of the weekly chart to find out. 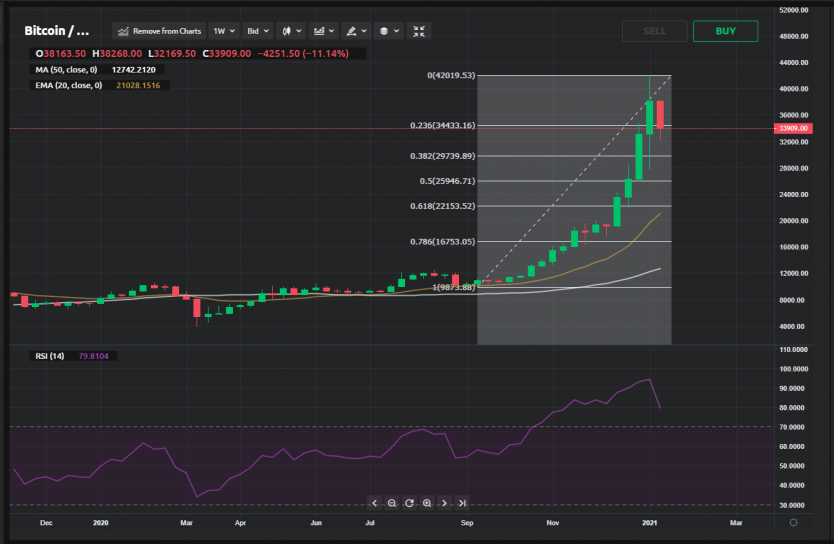 The rally of the past few weeks had pushed the Relative Strength Index (RSI) above 94, mirroring the level from which correction had started after the previous bull run in 2017.

The current pullback has strong support at the 38.2 per cent Fibonacci retracement level at $29,739.89. If the BTC/USD pair rebounds off this support, it will suggest the sentiment remains positive as bulls are accumulating on dips.

But if the support cracks, the next critical support is the 50 per cent retracement level at $25,946.71. A strong rebound off this level will suggest the trend remains bullish but the rally may not resume in a hurry. The pair could remain range-bound for a few weeks and then start the next trending move.

The Bitcoin price weekly analysis shows the first signs of profit booking at higher levels. Is this the start of a deeper correction or a swift pullback that is likely to be purchased? Let’s perform the BTC price analysis of the daily chart to find out. 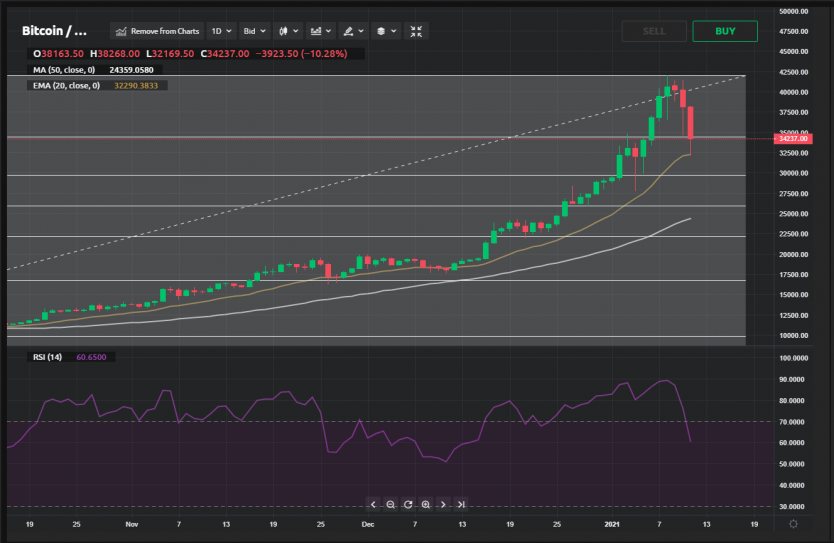 Bitcoin formed a hammer candlestick pattern on January 9, which was followed by a sharp drop on January 10 when the price hit an intraday low at $34,595.50. However, the bulls aggressively purchased this dip, resulting in a sharp recovery by the close.

The bears renewed their selling pressure again today, indicating a possible change in sentiment, where traders wait for a minor rally to lighten up their position rather than buy the dips.

The bulls are currently attempting to defend the 20-day EMA. If the rebound off this level sustains, it will suggest traders may be entering at lower levels. The bulls will then again try to push the price towards the all-time high.

But if the rebound lacks strength, it is likely to counter another bout of selling that may sink the pair below the 20-day EMA. Such a move will suggest that the short-term top may be in place.

Bitcoin is currently witnessing a strong correction. Traders may watch the price near the 20-day EMA and consider long positions for a quick short-term trade because the price action is likely to be choppy for the next few days.

Traders may avoid long positions if the bears sink and sustain the price below the 20-day EMA for a few hours.