News&Features Analysis Bitcoin price analysis for March 15-21: the coin could drop below $54,000 in the next week

Rumours were doing the rounds for the past few days that Oracle may be the next major corporation to buy Bitcoin. Therefore, traders were keenly watching Oracle’s earnings call for a confirmation of the purchase, but denial by the company that it had not acquired Bitcoin dampened sentiment.

However, Bitcoin adoption by other firms continued to grow. American Residential Warranty tied up with Gemini to invest in Bitcoin to increase its “returns on cash.” The firm also plans to accept Bitcoin payments from investors.

Another company, RushOrderTees, which deals in t-shirt printing and embroidering, also said it has invested $300,000 in Bitcoin and other crypto-assets over the past month. It plans to further increase the allocation to $1 million by April end.

However, everybody is not bullish on Bitcoin. Tim Bond, a portfolio manager at Odey Asset Management, in a recent interview with Market Watch, warned that “bitcoin is a particularly vile asset class,” with “no real social utility other than as a tool for speculation and a means to launder the proceeds of crime.”

Nevertheless, Bitcoin continues to attract institutional investors even after the sharp rally in the past year. Could this boost Bitcoin’s price higher? Let’s do the Bitcoin price trend analysis of the weekly chart to find out. 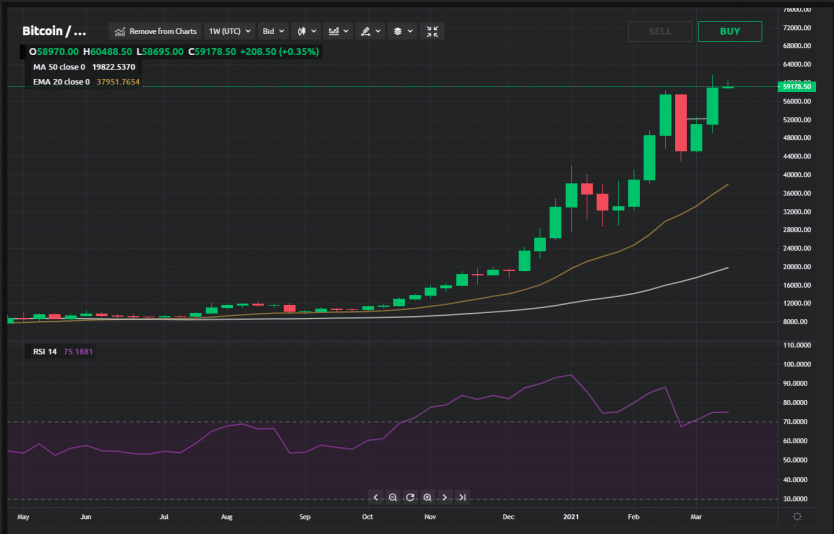 The moving averages are sloping up, indicating the bulls are in command. However, the relative strength index (RSI) has formed a negative divergence, which warns that the bullish momentum may be weakening.

If the bears can pull and sustain the price back below the breakout level at $58,341.75, it will suggest profit-booking at higher levels. The BTC/USD pair could then enter a minor correction or consolidation. The long-term trend will turn in favor of the bears if they can sink the pair below $42,979.50.

The Bitcoin price weekly analysis shows that bulls are in command, but the negative divergence on the RSI warrants caution. Let’s perform the BTC price analysis of the daily chart to spot the critical levels that may warn of a possible trend change. 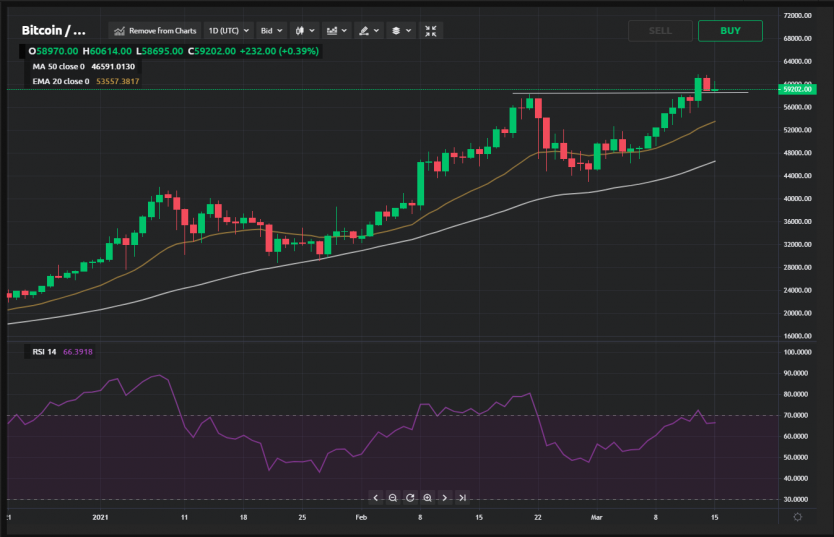 The price action on the daily chart shows a lack of follow-up buying after the bulls propelled the pair to a new all-time high on March 13. Profit booking has pulled the price down to the breakout level at $58,341.75.

If the price rebounds off the current level, the bulls will try to resume the uptrend. A breakout of $61,777.85 could start the next leg of the uptrend that could reach $72,521.25. The upsloping moving averages and the RSI near the overbought zone suggest bulls are in control.

If Bitcoin drops and sustains below $58,341.75 for two days, it will suggest a lack of demand at higher levels. That could result in a correction to the 50-day SMA. Therefore, positional traders may sit on the sidelines and wait for lower levels in the future.

Contrary to this assumption, if the pair breaks above $61,777.85, short-term traders may consider riding the move higher by keeping a close stop-loss.