News&Features Analysis Bitcoin price analysis for November 2-8: coin could consolidate in the short-term

Bitcoin price analysis for November 2-8: coin could consolidate in the short-term

The bulls will again try to push Bitcoin above $14,000 if the price remains in a tight range for the next few days

Bitcoin’s price has a history of surging about ten-fold after sustaining above critical round figures for more than 100 days, as highlighted by Twitter user Julio Moreno.

If Bitcoin manages to stay above $10,000 till November 3, it will complete 100 days above this level. If history repeats itself or even if it rhymes, then Bitcoin could rally sharply in the next few months.

While such statistics are helpful as they project a possibility, traders should keep their greed under check and buy only if other factors are also supportive.

Let’s do the Bitcoin price trend analysis of the weekly chart to see the path of least resistance and the possible levels that may act as a roadblock on the upside. 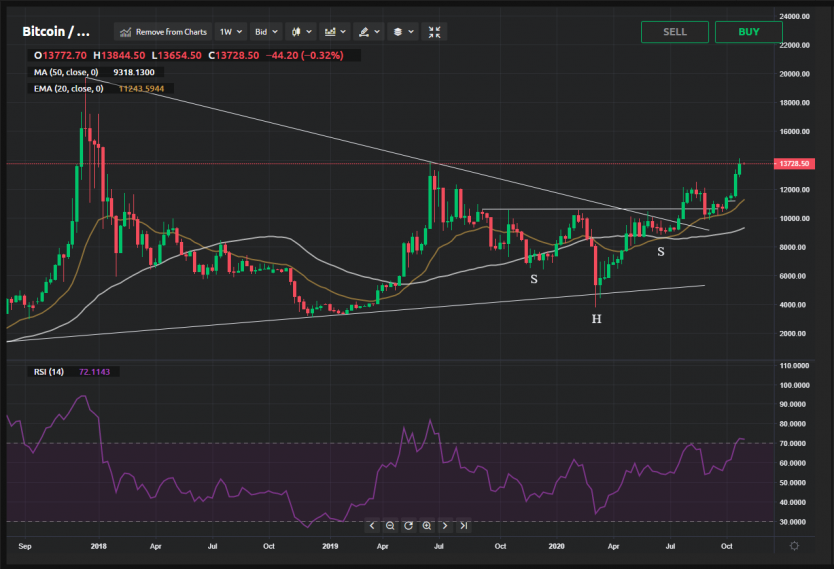 Both moving averages are sloping up and the RSI has jumped into the overbought zone, which suggests that the bulls are in command.

However, the bears are likely to mount a stiff resistance at the $14,000 level because if they allow the price to break above it, the BTC/USD pair could pick up momentum and reach $17,000 and then challenge the all-time highs.

Even if the pair corrects from the current levels, the bulls will try to defend the critical support at $12,500. If they manage to do that, then another attempt to push the price above the $14,000 level is likely.

This bullish view will be invalidated if the Bitcoin price turns down from the current levels and breaks below the 20-week EMA.

The Bitcoin price weekly analysis shows that the trend is up but the bears are attempting to stall the up-move at $14,000. Let’s do the BTC price analysis of the daily chart to spot the critical support levels where buyers may step in. 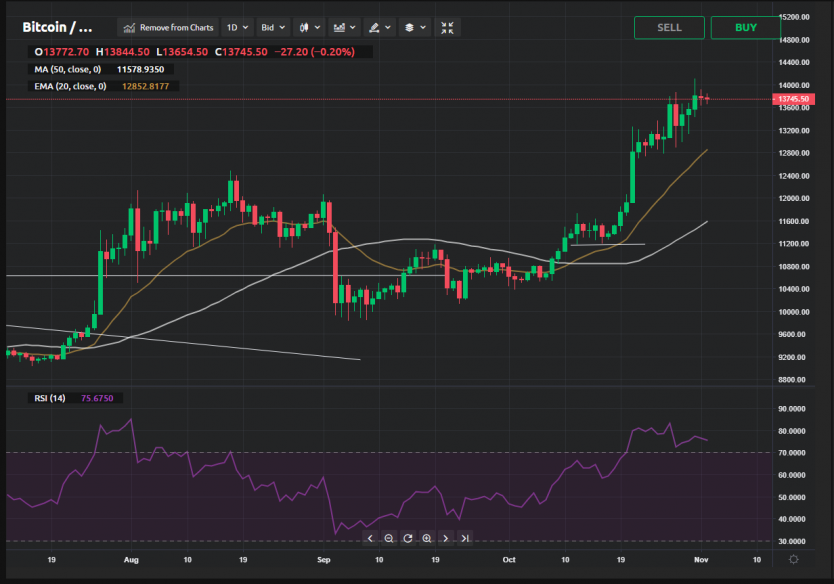 Bitcoin rose to $14,101.50 on October 31 but the bulls could not sustain the price above $14,000. However, the positive thing is that the failure to sustain did not spark a selloff.

The pair formed a doji inside day candlestick pattern on November 1, which shows indecision among the bulls and the bears.

However, if the bears do not sink the price below $13,400 within the next few days, the bulls will again try to drive the price above $14,000. If they succeed, the next leg of the uptrend may begin.

As the trend is up, the bulls are likely to buy on dips to the 20-day EMA. If the price rebounds off this level, then another attempt to propel the pair above $14,000 is possible.

The only minor negative development on the chart is the first signs of a bearish divergence that is forming on the RSI. This suggests that the momentum could be weakening.

Traders who had initiated long positions as proposed in an earlier analysis may still be holding a part of their positions, after having booked some profits as suggested in the previous analysis.

As Bitcoin has reached a critical level, traders could consider booking profits on about 80 per cent of their trading positions and trail the rest with a deeper stop-loss because, if the bulls push the price above $14,000, the momentum could pick up.

Bitcoin to US Dollar
Trader sentiment (on leverage)
Daily change
16944.3
Low: 16916
High: 17092.5
Sell 16951.85 Buy 16952.00
Sell 16951.85 Buy 16952.00
The material provided on this website is for information purposes only and should not be regarded as investment research or investment advice. Any opinion that may be provided on this page is a subjective point of view of the author and does not constitute a recommendation by Currency Com Bel LLC or its partners. We do not make any endorsements or warranty on the accuracy or completeness of the information that is provided on this page. By relying on the information on this page, you acknowledge that you are acting knowingly and independently and that you accept all the risks involved.
Bitcoin Cryptocurrency
АWin-Win
referral programme
Learn more