News&Features Analysis Bitcoin price analysis for September 14-20: the coin could pick up momentum above $10,700

Bitcoin price analysis for September 14-20: the coin could pick up momentum above $10,700

Bitcoin is currently in a range, the trend will turn bullish if the price breaks above $10,700 and bearish below $9,800

Crypto enthusiasts have long considered Bitcoin as a store of value similar to gold and it seems to be playing out perfectly during the current crisis. Bloomberg analyst Mike McGlone said in the latest crypto newsletter that “on a 12-month basis, the quasi-currencies are about 0.80 correlated, the highest in our database since 2010”.

Head of emerging markets and chief global strategist at Morgan Stanley Investment Management, Ruchir Sharma says in an interview with CNN that due to the huge money printing by the central banks, traders should consider keeping about 5 per cent of their portfolio in gold or cryptocurrencies as they are likely to perform well over the next three to five years.

While the long-term narrative is bullish, is Bitcoin’s price showing signs of having bottomed out or can it fall further? Let’s do the Bitcoin price trend analysis on the weekly chart to find out. 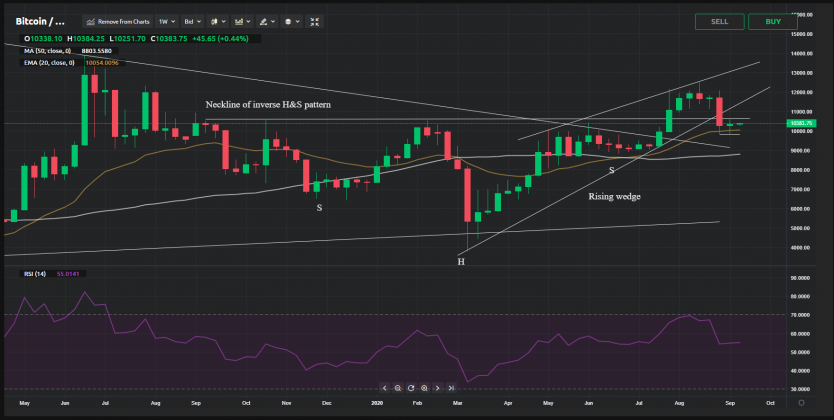 Bitcoin was relatively flat last week as it inched up 0.77 per cent to end at $10,338.10. The small range trading during the week resulted in a doji candlestick pattern, which suggests indecision among the bulls and the bears.

Although the price had slipped below the 20-week EMA, the bears could not intensify the selling, which suggests that the bulls are buying at lower levels.

However, unless the bulls push the price back above the neckline of the inverse head-and-shoulders pattern quickly, another wave of selling is likely. If the bears can sink the price below $9,832, a fall to the 50-week SMA is likely.

Such a move will be a huge negative and it will also invalidate the bullish inverse H&S pattern. The failure of a bullish pattern is a negative sign as it traps several aggressive bulls who are then forced to close their positions.

Contrary to this assumption, if the price rises from its current level and breaks above the neckline, it will suggest that the recent fall was a bear trap. Such a move could attract further buying.

The Bitcoin price weekly analysis shows that the bulls and the bears are playing it safe and are not waging large bets. Let’s do the BTC price analysis on the daily chart to spot the critical levels to watch out for. 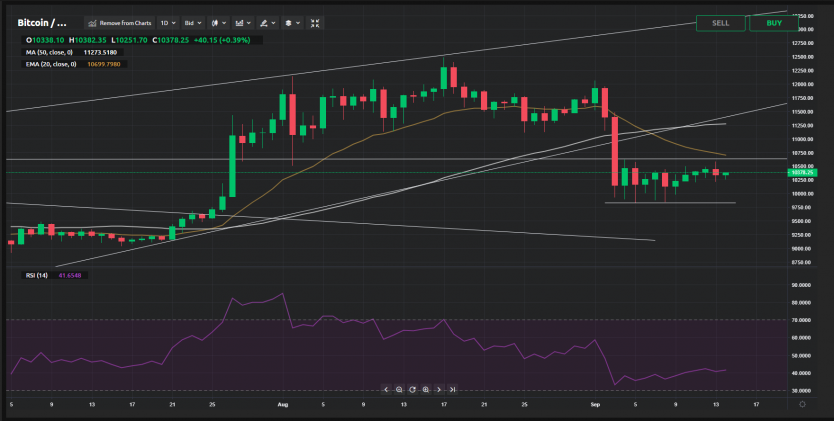 The bears attempted to sink the price below the range on September 8 but failed. This attracted buying by short-term traders who are now attempting to push the price above the top of the range.

On September 13, the price turned down sharply from just below the downsloping 20-day EMA, which suggests that the bears are aggressively defending this resistance.

The RSI has also been trading in the negative territory for the past few days, which suggests that the short-term advantage is with the sellers.

However, if the bears fail to sink the price below $10,200, the bulls will make one more attempt to clear the $10,616.25 hurdle. If they can sustain the price above this level for three days, it will suggest that the correction might be over.

As this is a risky trade, keep a tight stop-loss and a position size of about 50 per cent of usual.

On the other hand, if the price continues to fall and breaks below $9,832.05, then the bears can consider short positions with a target objective of $9,000. Keep a close stop-loss to minimise the risk.