Boeing shares have rebounded and are poised to trend higher, as news of a coronavirus vaccine has buoyed value shares. The aerospace company has been in a slump following two plane crashes which put its new offering, the 737 Max, on the sidelines. Just as Boeing is nearing approval to return the 737 Max to the sky, the company has to deal with the fallout of the pandemic.

Boeing stock performance generally experiences mixed results in December. Despite this backdrop, the impetus of a vaccine has generated momentum in the company helping to generate positive technical momentum.

The Boeing 737 Max, the newest plane manufactured by Boeing, is nearing clearance to fly again after a 20-month ban. Yesterday the company was given permission but the planes still need re-equipment and pilots need to be trained.

The grounding of the plane was driven by two crashes that sent the company into crisis. The timing of the pandemic led to several order cancellations. During the first 10 months of 2020, Boeing lost 393 aircraft orders. Chief rival Airbus won 308 net new orders for aircraft in that period. However, Federal Aviation Administration is now at the end of its review of the plane, which could allow Boeing to return the 737 Max to the sky. It also appears that there are potential buyers of the Boeing 737 Max. Southwest Airlines said they are in talks with Boeing and are poised to jump on deals.

The seasonals are positive

What is your sentiment on BA?

Why not give BA a try?

Short-term momentum has turned positive as the fast stochastic generated a crossover buy signal. The current reading on the fast stochastic is 73, below the overbought trigger level of 80. Medium-term momentum has turned positive as the moving average convergence divergence  (MACD) index generated a crossover buy signal. This occurs as the MACD line (the 12-week moving average minus the 26-week moving average) has recently crossed above the MACD signal line. The MACD histogram is printing in positive territory with an upward sloping trajectory which points to higher prices. 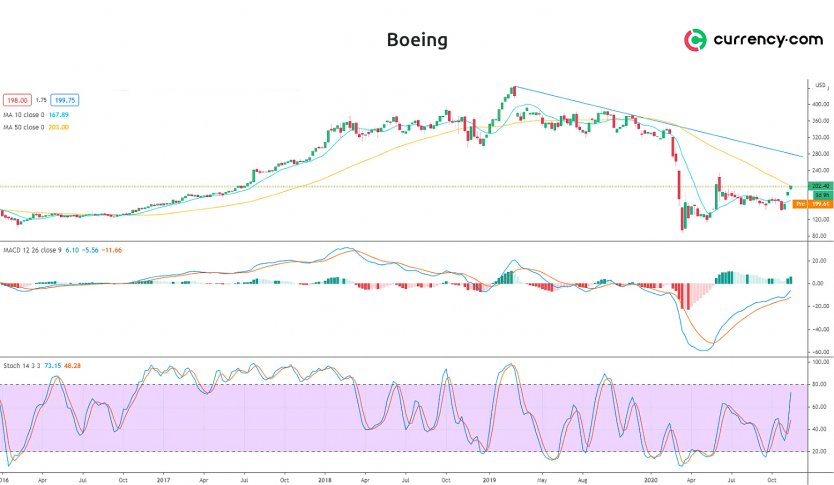 Boeing shares: how to trade

Boeing has experienced a rough ride. After having its 737 Max plane grounded following  two crashes, the company returns to a recession triggered by a pandemic. The stock prices have been given a boost following the results of the Pfizer and Moderna vaccines, as the markets can see a future where people’s lives are back to normal. The technicals are positive and prices are poised to move higher. Look for Boeing to continue to rally in December.

Boeing
Trader sentiment (on leverage)
Daily change
186.08
Low: 180.86
High: 188.09
Sell 186.01 Buy 186.34
Sell 186.01 Buy 186.34
The material provided on this website is for information purposes only and should not be regarded as investment research or investment advice. Any opinion that may be provided on this page is a subjective point of view of the author and does not constitute a recommendation by Currency Com Bel LLC or its partners. We do not make any endorsements or warranty on the accuracy or completeness of the information that is provided on this page. By relying on the information on this page, you acknowledge that you are acting knowingly and independently and that you accept all the risks involved.
АWin-Win
referral programme
Learn more