The share price is forming a bear flag continuation pattern

Boeing shares are trading sideways and have failed to move higher with the broader markets. A recent congressional report blamed Boeing management for engineering failures that brought about the  two crashes of the Boeing 737 Max.

Seasonally, the company rises in October after a strong September. Yet, the technicals are negative as the share price is forming a bear flag continuation pattern.

A congressional report was released in the middle of September which condemned Boeing the aviation giant along with the Federal Aviation Administration (FAA) for the two crashes that killed 346 people aboard two Boeing 737 Max craft. The accidents grounded the planes globally following several engineering flaws and mismanagement. This report came from the House Transportation and Infrastructure Committee. The investigation concluded after 18 months that Boeing employees emphasised profits over safety and the FAA allowed the company more sway over its oversight than should have been allowed.

The seasonals are positive for Boeing 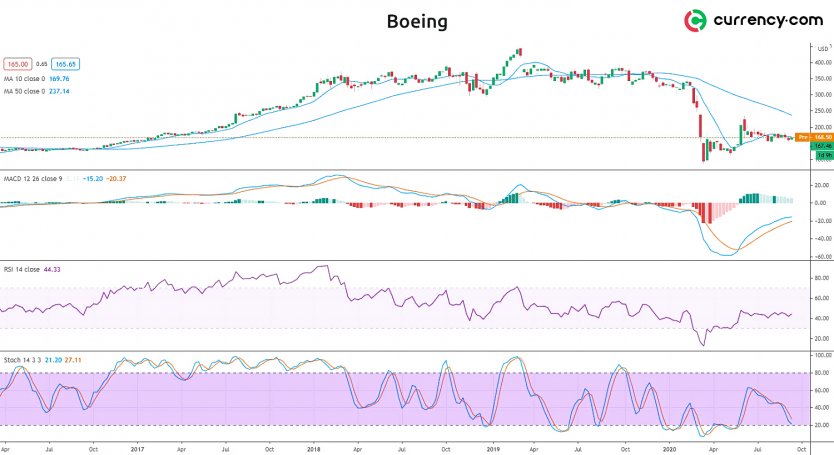 What is your sentiment on BA?

Why not give BA a try?

Medium-term momentum is neutral. The RSI (relative strength index) is moving sideways and is in the middle of the neutral range which reflects consolidation. The MACD (moving average convergence divergence) histogram is printing in the black with a decelerating trajectory which points to consolidation.

How to trade Boeing shares

Boeing shares have underperformed the S&P 500 index by 52 per cent in 2020, as the crashes that occurred in 2019 have weighed on the share price. The recent congressional investigation points the finger directly at Boeing saying employees emphasized profits over safety. While the share price has historically outperformed in October, it’s hard to believe that the company will be able to mount a rally in the face of this negative scenario. The technicals are negative as the share price is forming a bear flag continuation pattern as the trend and momentum point to lower prices. Look for Boeing to either trade sideways or test lower levels in October.

FURTHER READING Tesla share price forecast: is the stock running out of road?