Learn to trade The basics Crypto scams: What they are, what they do, and how to avoid them

There have been many crypto scams. We explain how to spot them and avoid them

The cryptocurrency world is relatively new and comparatively unregulated. This attracts fraudsters seeking to carry out all kinds of crypto scams. We want to make sure you have the safest possible journey through the crypto world, so here we tell you about scams and how to avoid them.

Not all unsuccessful cryptocurrencies are scams. Investors can lose money if a genuine coin fails through natural causes, and was not specifically designed to fleece people. Particularly when a coin is promoted enthusiastically via social media accounts, you need to be circumspect and do your own research.

A rise in crypto fraud

In the US alone, investors lost more than $80m to cryptocurrency scams in the six months between 1 October 2020 and 31 March 2021, according to a report by the Federal Trade Commission (FTC). The report said almost 7,000 people had fallen victim to cryptocurrency fraud, with an average loss of $1,900. Those figures suggest that, compared to the same period in 2020, more than 12 times the number of people had been targeted by cryptocurrency scams, with the amount of money stolen is up by nearly 1,000%.

“They blend into the scene with claims that can seem plausible because cryptocurrency is unknown territory for many people.”

The Wall Street Journal shared the story of Sebastian, a 28-year-old pharmacy technician who lost his $10,000 investment in crypto start-up LUB. The WSJ said the coin, which promised investors daily returns of 10%, died in May. Sebastian said:

“I feel ashamed and still can’t get my head around how stupid I was.”

The blockchain analytics company CipherTrace said there had been a decrease in crypto investment fraud worldwide, with $4.1bn stolen globally in 2019 and $432m taken during the first four months of 2021.

However, the company says, there has been a growth in crypto scams involving decentralised finance (DeFi), with $83.4m swindled from investors in the first third of 2021, more than double the $41m stolen in the whole of 2020.

Authorities have managed to catch up with some fraudsters. In February, the crypto hedge-fund manager Stefan Qin pleaded guilty to a charge of security fraud at a US Federal Court in New York. He admitted lying to investors about returns on his $90m flagship fund, Virgil Sigma Fund LP. Qin, 24, an Australian national originally from Canberra, stole nearly all the fund’s assets and then tried to steal from another fund in order to help pay investors. US Attorney Audrey Strauss said:

“The whole house of cards has been revealed, and Qin now awaits sentencing for his brazen thievery.”

On 2 March, an American court ruled that Benjamin Reynolds, from Manchester in the UK, had to pay $571m after it was found he had scammed people into sending him more than 22,000 bitcoin. The federal court in Manhattan said Reynolds had to pay around $143m in restitution on top of a $429m fine.

Reynolds told investors that he would trade their bitcoin in currency markets to increase profits. He made no trades for his clients. The fraud, which took place between May and October 2017, saw him target 169 American citizens and more than 1,000 people worldwide.

Potential cryptocurrency scams are not limited to the US. The UK’s Sunday Times newspaper reported in July on Grantedge Trading Investment. The bogus company falsely claimed the Russian oligarch Alisher Usmanov as its chief executive. It listed the Indian steel billionaire Lakshmi Mittal and the British chemicals tycoon Sir Jim Ratcliffe as shareholders. Grantedge claimed to offer cryptocurrency among its products available for trade.

In April, the Turkish crypto exchange Thodex went dark, leaving around 391,000 people unable to access their accounts. Faruk Fatih Özer, the company’s CEO, was seen at an airport. Turkish media reported that he had taken $2bn worth of digital currency with him.

Historically, one of the most notable attempted frauds involved a viral social media post which claimed Martin Lewis, founder of the British website MoneySavingExpert.com, was advising people to invest in bitcoin through what turned out to be a scam website.

Lewis took legal action against Facebook. In January 2019, the social media giant agreed to pay £3m to Citizen’s Advice so the organisation could set up a “scams action” project.

“You will have seen adverts with me for Bitcoin or Bitcoin trading. They are not Bitcoin, they are scams. Don't touch them. If you see my face in an advert it's not true. Be incredibly careful to do your research and go for a legitimate source if you want your Bitcoin.”

Some types of crypto investment scams include:

How to spot a crypto scam 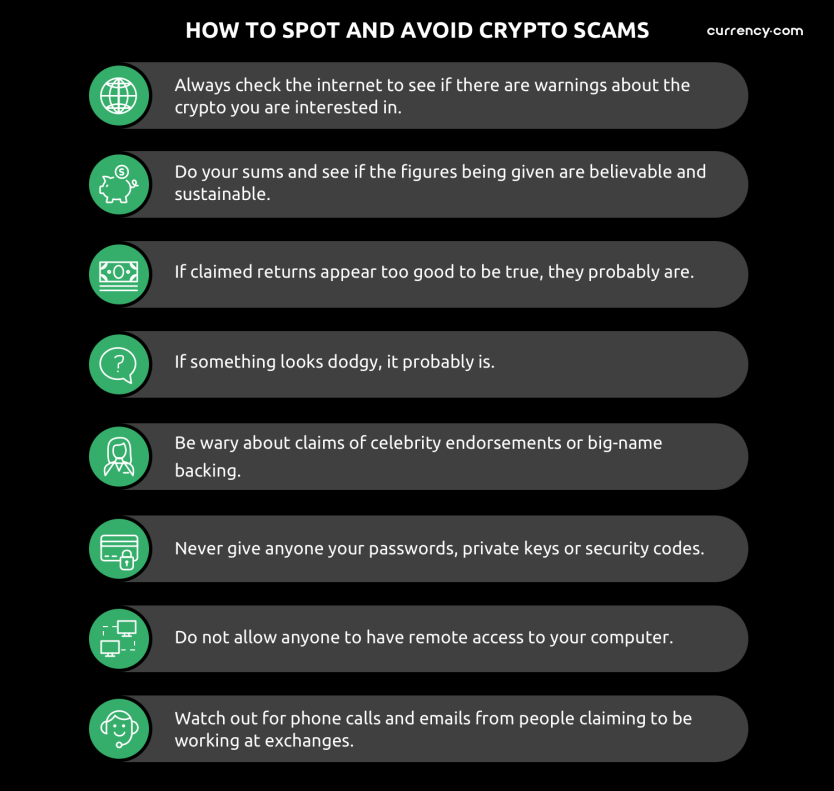 Also remember that cryptocurrencies are in a volatile market. Even if you are dealing with something genuine, there is no guarantee that you will make money. Do your research, remember crypto prices can go up as well as down, and never invest more than you can afford to lose.

Crypto arbitrage: what is it, how can you make money, and what problems do you need to avoid?

Five common crypto scams you need to know about
The material provided on this website is for information purposes only and should not be regarded as investment research or investment advice. Any opinion that may be provided on this page is a subjective point of view of the author and does not constitute a recommendation by Currency Com Bel LLC or its partners. We do not make any endorsements or warranty on the accuracy or completeness of the information that is provided on this page. By relying on the information on this page, you acknowledge that you are acting knowingly and independently and that you accept all the risks involved.
АWin-Win
referral programme
Learn more