Learn to trade The basics Ethereum vs Ethereum Classic: what’s the difference?

Ethereum vs Ethereum Classic: why did they split, what makes them different, and which one is better? Find out in our ultimate guide

Ethereum vs Ethereum Classic – it’s a debate that crypto enthusiasts have a tendency to get passionate about (some even throw chairs when they get defensive).

But even though they sound the same, these two cryptocurrencies have key distinctions that set them apart, In market capitalisation and their philosophies.

Here, we’re going to look at the difference between Ethereum and Ethereum Classic.

What is Ethereum and Ethereum Classic?

A common question for those who are brand new to this drama is which came first: Ethereum or Ethereum Classic?

Once upon a time, the Ethereum community was one big, happy family. The network was the brainchild of Vitalik Buterin, and it was initially released in July 2015.

But disaster struck in June 2016, when Ethereum was hacked and funds worth $50m were stolen. This led to a tense stand-off about what should happen next. Ultimately, it was decided a hard fork would take place . A drastic course of action that effectively involved splitting a blockchain in two, creating a parallel universe. Some critics had warned that doing this would undermine the perception that blockchains were immutable, and others claimed it went against the principles that Ethereum was initially founded on. Their concerns were drowned out,with 85% voting for the hard fork.

And so, the battle between Ethereum (ETH) vs. Ethereum Classic (ETC) began. The new blockchain retained the Ethereum name, while the old platform was rebranded to Classic. Among the 15%who were outvoted, some were determined to keep the initial blockchain alive, prompting a significant amount of eye-rolling among cynics.

Ethereum or Ethereum Classic? The facts

As our infographic above shows, when it comes to Ethereum vs Ethereum Classic, ETH is winning hands down in terms of popularity. There are several reasons for this. Ethereum has a bigger community of developers, meaning hundreds of decentralised apps are available – spanning a multitude of use cases. The Ethereum blockchain has also become a hub for decentralized finance – a home for projects that offer things such as crypto-backed loans.

At the time of writing, Ethereum’s market cap was more than 71times bigger than its Classic counterpart. Daily transactions are a crucial indicator of a blockchain’s health, too. In May 2021, ETH reached 1.7 million daily transactions – exceeding the record highs of 1.35 million seen at the start of 2018. ETC, I hear you ask? It reached 118,000 in May 2021.

Which is better: Ethereum or Ethereum Classic? 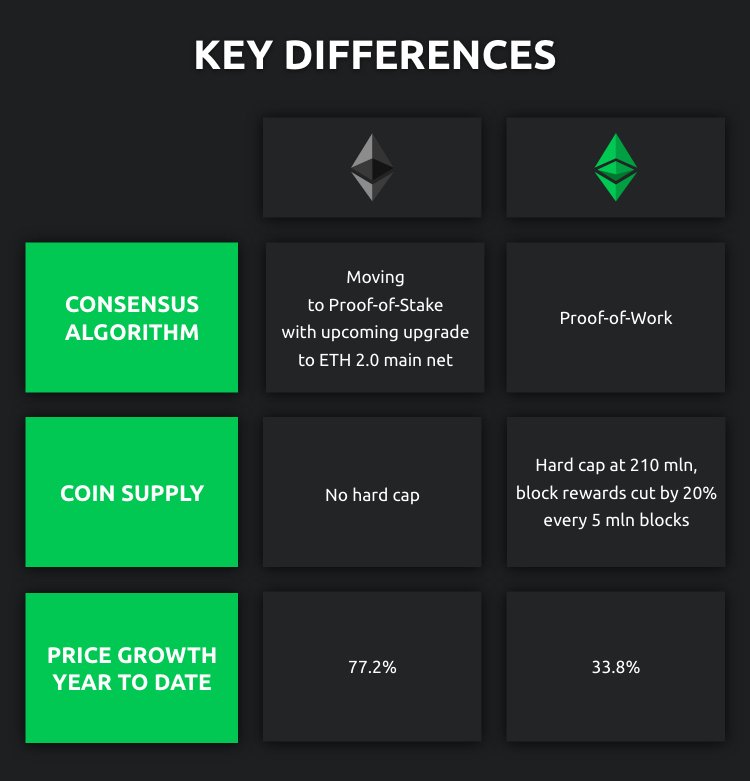 The Ethereum vs Ethereum Classic debate often centres on which coin is better. This is rather a subjective way of looking things.

But, as our infographic above shows, there are some metrics where ETH certainly has the upper hand. Year to date, ETH has seen substantially more price growth than ETC. A major upgrade for the Ethereum blockchain will result in a long-awaited shift from a Proof-of-Work consensus algorithm to Proof-of-Stake. Enthusiasts say the benefits of PoS are clear: greater levels of security and reduced energy usage. Ethereum co-founder Joseph Lubin has even claimed that its blockchain will be 1,000 times more scalable 18 to 24 months after the upgrade is complete.

It’s highly likely that the Ethereum (ETH) vs. Ethereum Classic (ETC) battle will intensify further when ETH 2.0 bursts onto the scene. This is because ETC has no intentions of switching to PoS – and it intends to continue with its existing PoW consensus mechanism.

Is there any hope for Ethereum Classic?

Despite being Ethereum’s much smaller cousin, the developers behind ETC remain upbeat that they have some unique selling points to offer the crypto community.

The altcoin’s official Twitter account has once claimed that ETC has more active accounts than Cardano, Bitcoin Cash, Dash, Litecoin, Tron, Monero, NEO and Zcash combined – despite the fact that many of these cryptocurrencies have a substantially larger market cap.

According to the prominent crypto asset management firm Grayscale, Ethereum Classic has several advantages it can bring to the table.

“There is a growing base of developers, business operators, non-profits, and active community members driving development, education, and adoption of Ethereum Classic.”

Some of the biggest groups include ETC Core, the ETC Consortium, and the Ethereum Classic Cooperative.

Grayscale also pointed out that Ethereum Classic mining is much more accessible to those who are limited by equipment, as the electricity costs and computational capacity required to confirm transactions is cheaper when compared with Bitcoin. The report added:

“Ethereum Classic mining may be attractive to potential marginal miners because it requires less processing power and has lower operating costs.”

Of course, where there are pros, there are cons. According to Grayscale, ETC faces several key risks. Its report warned that scalability could be a problem going forward and the level of decentralisation on the network is a concern too, not least because the two largest mining pools control more than 50% of the network’s hash rate. The report warned:

“Ethereum Classic faces strong competition from a broad spectrum of general-purpose platform digital currency networks, including Ethereum, Horizen, Eos, and Tezos among others.”

Nonetheless, Grayscale appears to be upbeat about ETC’s chances and its role in the crypto community.Despite being Ethereum’s much smaller sibling. The authors said:

“With its global network of users, developers, business operators, and supporters, Ethereum Classic has proven resilient with material social and technological momentum, while still retaining optionality to benefit from quality upstream developments introduced on Ethereum.”

The network was the brainchild of Vitalik Buterin, and it was initially released in July 2015.

In June 2016, Ethereum was hacked and funds worth $50m were stolen. A hard fork meant a new blockchain that retained the Ethereum name, while the old platform was rebranded to Classic.

At the time of writing, Ethereum’s market cap was more than 71 times bigger than its Classic counterpart.

JUNO price prediction: What next for the smart contract platform?