Learn to trade The basics How many Bitcoins are there?

How many Bitcoins are there?

How many Bitcoins are there? Well, there’s 18.5 million in existence at the moment – but here’s a problem: up to 20 per cent of them may be missing

How many Bitcoins are there? Well, when Satoshi Nakamoto was writing the white paper for the world’s first cryptocurrency back in the late noughties, he decided that BTC would have a hard cap of 21 million.

He might not have realised it at the time, but this is hugely significant. Bitcoin’s design has achieved digital scarcity – and some now describe it as the 21st century’s answer to gold.

In this article, we’re going to explain the tokenomics of Bitcoin in a simple way. 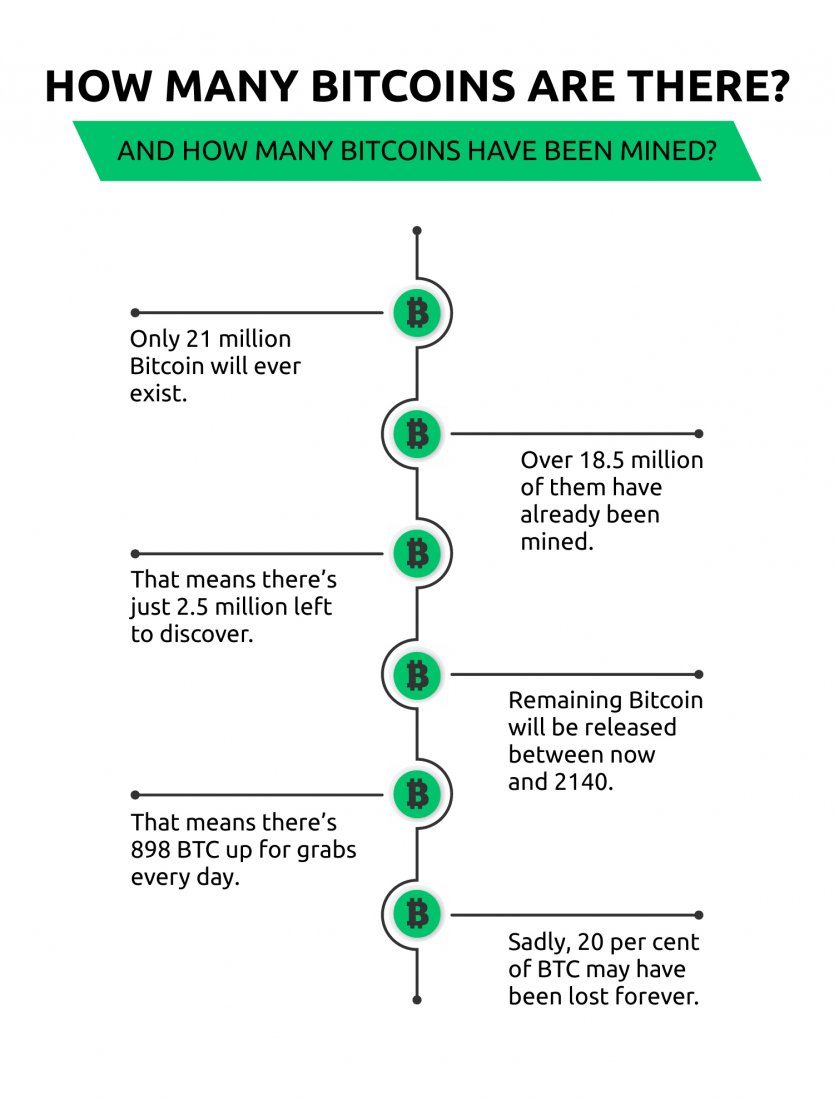 This cryptocurrency’s unusual design means that the vast majority of Bitcoin that’ll ever exist – 88 per cent of the total supply – is already in circulation.

When the Bitcoin network first launched all the way back in 2009, miners received a reward of 50 BTC for every block they validated. This meant that, in just four years, 10.5 million BTC was released into the ecosystem.

But in November 2012, this reward was halved to 25 BTC – and in the four years that followed, just 5.25 million of them were mined. The Bitcoin network went through these halvings again in 2016 and 2020. As of May this year, miners receive just 6.25 BTC when they verify a block of transactions. Although they can take some comfort in the fact that Bitcoin is now worth far more than it was when block rewards were higher, it’s fair to say that transaction fees are going to become a more important source of income.

How many Bitcoins are lost?

Although these figures make it seem like there are 18.5 million BTC that are ripe for the taking right now, this isn’t exactly true.

According to research from the blockchain intelligence firm Chainalysis, about 3.7 million BTC has been lost forever. Crypto assets that fall into this category haven’t been moved from their current wallet address for five years or longer. There have been countless stories about people who lost access to their crypto after accidentally throwing away their private keys – which are comparable to the password to a bank account, or the PIN code for a debit card.

One of them came from a Welsh man who mined crypto in the early days – amassing a treasure chest of 7,500 BTC. He broke up the laptop for parts and kept the hard drive safe, only to throw it away when he was clearing out his house. At the time of writing, this hard drive would be worth a whopping $99.6m. It’s now probably languishing in landfill in the town of Newport, but the council won’t let him search for it.

We haven’t even talked about the danger of hack attacks yet – the most notorious of which was the Mt. Gox heist of 2014. At the time, the exchange was the world’s most popular Bitcoin exchange – and it handled approximately 70 per cent of all trades. The platform came crashing down after 850,000 BTC was stolen from the company’s coffers, with 750,000 of them belonging to customers. Only a small fraction of them have been found, and the victims are yet to be compensated.

So… how many Bitcoins exist?

At the time of writing, this stands at 18,529,125 BTC. But as we say, some have been rendered irretrievable. There’s also speculation that the cryptocurrency’s pseudonymous inventor, Satoshi Nakamoto, has a large stash of Bitcoin stored away that hasn’t been moved for a long time. Back in May, there was a flurry of excitement after “sleeping” crypto was moved for the first time since 2010, and rumours began to swirl that Nakamoto was starting to become active again.

How many Bitcoins are in circulation?

With about 3.7 million BTC lost, the question is how much cryptocurrency is freely flowing around the ecosystem. According to Chainalysis, the answer is… well… not much.

Approximately 60 per cent of Bitcoin, roughly 11.4 million, is held by people or businesses who are holding on to it in the form of a long-term investment.

This means that just 3.5 million BTC is used for trading and is on the move regularly, usually between crypto exchanges.

As the Chainalysis report explained:

“With more people looking to trade Bitcoin, which is only becoming more scarce following the recent halving, Bitcoin moving from the investment bucket (or potentially even the lost bucket if the earliest adopters still have their private keys) into the trading bucket could become a crucial source of liquidity. However, one would expect this will only happen if Bitcoin’s price rises to a level at which long-term investors are willing to sell.”

The power of the supply cap

Bitcoin’s design has gained new relevance given how countries around the world have embarked on massive money-printing sprees as they try to mitigate the economic damage caused by the coronavirus pandemic. Unfortunately, such levels of quantitative easing have consequences – not least because this devalues the currency already in circulation.

Other major cryptocurrencies, such as Ether and XRP, have much bigger circulating supplies. At the time of writing, there are 113,206,816 ETH in existence. There’s even more XRP – a whopping 45.3 billion to be exact – and this helps explain why its per-coin price is so miniscule compared with the two larger cryptocurrencies.

With institutions snapping up Bitcoin at a rapid rate, there are concerns that we could end up seeing cryptocurrency shortages in the future. Some have suggested that BTC’s total supply should be extended to ensure that miners can continue to be rewarded, as they play a vital role in keeping the network secure. However, others argue that this would be a fatal error that would undermine confidence in the project – not least because it would dilute the value of Bitcoin held by existing owners.

Thankfully, Bitcoin can be divided down to eight decimal places, meaning the smallest amount that can be transacted is 0.00000001 BTC. As a result, people shouldn’t have a problem getting their hands on a smaller chunk of crypto if they so wish.