News&Features Features Litecoin price prediction: as good as it’s going to get?

Although the Litecoin price prediction is given a boost by new use cases and partnerships, some question whether it has the potential to go mainstream.

Bitcoin has been in something of a holding pattern of late. It’s been trading in an exceedingly narrow corridor – and it’s unclear whether the market will head upwards or downwards in the medium term. When it comes to the Litecoin price prediction, it’s a similar story.

The Litecoin price trend has seen the world’s seventh-largest cryptocurrency repeatedly fail to overcome stubborn resistance around the $50 mark. Past attempts to vault past this level have resulted in a swift correction in recent months. This draws parallels with Bitcoin, which has consistently tumbled after managing to crack $10,000. 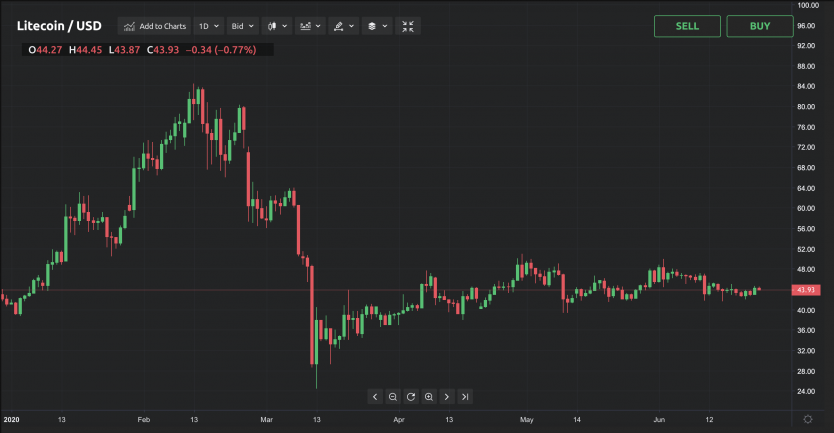 Overall, the Litecoin price in 2020 has been somewhat stagnant. It started the year at $41.67, and though it practically doubled in price and surged above $80 in February, the heat quickly began to leave the market – and LTC wasn’t immune from the crypto flash crash in the middle of March. At one point it slumped as low as $27.59. Since then, LTC has risen by 57.2 per cent to reach $43.39 at the time of writing, meaning there’s been little improvement since January overall.

Any price prediction for Litecoin has to take into account how disappointing this bounce back is when compared with Bitcoin. From March 12 to the time of writing, BTC has notched up gains of 109.1 per cent – far superior – and it’s also up 30 per cent on January 1.

For the Litecoin price prediction to become any more optimistic, “the silver to Bitcoin’s gold” needs to show that it has compelling use cases and increasing levels of adoption. Although LTC transactions are confirmed four times faster than BTC’s, meaning that it’s a more practical choice for making everyday payments, this hasn’t translated into demand.

Factors that would help the Litecoin price forecast include more headline-grabbing stories such as the Litecoin Foundation’s partnership with the legendary gaming brand Atari. Back in May, it was confirmed that LTC was going to be integrated throughout the entertainment company’s ecosystem, with the cryptocurrency being accepted as a payment method for games and accessories. Players have also been given the chance to buy Atari’s brand-new console using LTC, a milestone that has the potential to introduce thousands of people to this digital asset for the very first time.

“[We are] excited to see the possibilities a partnership like this can have for not only Litecoin and cryptocurrencies but also the gaming industry and lifelong fans of Atari.”

“Litecoin’s ease of use and low transaction costs make it a perfect fit.”

In other Litecoin price news, it was confirmed that a new agreement with MeconCash in South Korea means that LTC can be withdrawn to Korean won at more than 13,000 ATMs in the country. This is a big development for the cryptocurrency’s utility – giving LTC holders access to quick cash, as well as the freedom to send remittances to their loved ones abroad. Further use cases are planned for the future – and it’s partnerships like these that’ll help LTC prices increase organically.

Both MeconCash and the Litecoin Foundation noted that the collaboration will help LTC become a better-known brand in South Korea, increasing its footprint in the marketplace. Litecoin director Alan Austin explained:

“With billions in remittances sent each year to South Korea, Litecoin (through its speed, security, and low transaction fees) offers significant advantages over traditional methods of sending money overseas.”

And another factor in the Litecoin price prediction is an upcoming upgrade that aims to make LTC more scalable and private – two crucial factors that could encourage crypto enthusiasts to give it a try. In a recent interview with Cointelegraph, Lee shrugged off concerns that LTC has gained a reputation as a “boring” coin – championing the fact that he has sought to develop new features carefully so as not to undermine the network’s stability.

Will Litecoin prices go up? No one’s got a crystal ball. But altcoins live and die by their utility, and proving that they can serve as a compelling alternative to fiat currencies is a promising step on LTC’s part. Think of it this way: if you were given a choice between sending a remittance with punishing fees or saving money by using a digital asset instead, what would you choose?

So… let’s wrap things up by taking a look at how LTC’s value might evolve in the coming months. Given how Litecoin and Bitcoin have been closely correlated at times in the past, a breakout performance from BTC in the aftermath of its halving could help drive up LTC prices.

The immediate challenge facing LTC is managing to meaningfully break through the $50 barrier – a level that hasn’t been breached since “Black Thursday” in March. Repeated attempts to overcome this resistance often weakens the resolve of sellers, meaning that a breakout can become more likely. From here, key resistance levels can be found at $80, $100 and $120. As you can see, it’s going to be an uphill struggle if Litecoin is even going to come close to returning to 52-week highs of $142.56 that were seen in the summer of 2019.

There have been a few developments in the past 12 months that could send alarm bells ringing for the long-term future of Litecoin. One of them was LTC’s block reward halving last August, which didn’t ignite the sort of buying frenzy that we saw with BTC’s halving in May.

Litecoin’s hash rate actually dropped by more than 70 per cent following on from this event, and according to SEBA Bank, miners are sceptical about whether LTC’s price has much potential. The Swiss financial institution’s analysts wrote:

“Out of Bitcoin, Ether, and Litecoin, the former two have a healthy developer commitment towards respective projects. When it comes to Litecoin, the number of developers, as well as the frequency of upgrades, are tiny in relation to the other two. As a result, miners are not confident about the fundamental drivers of Litecoin compared to those of the other two.”

Last December, crypto analyst Sylvain Saurel also wrote an article that poured cold water on the notion that LTC is going to explode. The headline of his blog post? “Litecoin’s dream of being digital silver alongside Bitcoin in the future will not happen.”

Saurel set out three reasons why: Litecoin has a leader in Charlie Lee, while Bitcoin belongs to everyone; the coin is nothing more than a copy of BTC; and there isn’t actually a need for “digital silver” anyway.

“Litecoin will certainly remain in the top 10 of cryptocurrencies for some time to come, but its future is clearly not alongside a Bitcoin that could revolutionise the monetary and financial system in the future.”

Dire warnings like this don’t bode well for Litecoin.