Ethereum’s high gas rates last year spawned the concept of MetisDAO, a platform for decentralised organisations to thrive with much lower costs.

MetisDAO is a layer-2 solution built on top of Ethereum and has already attracted a variety of projects. It was founded by Elena Sinelnikova, winner of Canada’s Top Woman in Blockchain award, and Kevin Liu, who is also based in Canada. Since going live in 2021, the total value locked (TVL) into its mainnet has surged along with its METIS token.

The minting of new coins and the introduction of a new treasury system has led to some confident METIS price predictions. But how high can the token go?

What is MetisDAO (METIS)?

MetisDAO believes that decentralised autonomous organisations (DAO) are the future of businesses and their day-to-day operations. But it argues the current framework provided by Ethereum cannot support this, especially its “high gas costs and low throughput”.

The concept of MetisDAO is a layer-2 Ethereum solution that solves Ethereum’s six biggest challenges: Simplicity, speed, storage, scalability, security and savings. It wrote in its whitepaper: “Metis creates an ecosystem to build a truly decentralised economy based on Layer 2. We believe this is the future of organisations, communities and the economy.”

Despite only launching in 2021, MetisDAO is already being used by a range of different organisations, including NFT marketplaces, staking platforms and cross-chain bridges. This clear utility has led to its platform taking off and its METIS token soaring.

The testnet of the MetisDAO layer-2 solution went live in April 2021 and its token was trading around the $5 mark by the end of May.

For the first few months of METIS’s price history, it stayed around this level. But the token started surging in September 2021, peaking at $62.74 within the first two weeks of the month.

This rise came as the platform was gearing up for the public launch of its testnet, allowing users to stake and mine the cryptocurrency. It also introduced a bounty programme, whereby users would be rewarded for getting smart contracts to integrate with MetisDAO.

Despite settling around the $30 level, it rallied in early October as the token started trading on PancakeSwap. By 8 October 2021, METIS broke its previous record and hit $67.32. Unfortunately for METIS, its price corrected again, this time dropping down to around $40.

This bearish trend was only temporary and it was soon able to break a key psychological barrier. METIS raced from $60 on 25 October 2021 to $111.66 on 11 November. This came after an ecosystem was launched by MetisDAO to support businesses joining the platform, which is central to its goal.

METIS climbed even further, reaching $115.72 on 25 November 2021. A major milestone for the platform was unveiled the week before – the launch of its mainnet, named Andromeda.

Two DeFi platforms were set to launch on Andromeda before the end of the month, which were Netswap and StandardDeFi. This marked the beginning of many organisations being built on or integrated with its mainnet.

CoinTelegraph wrote: “Three reasons for the growing TVL on the Metis protocol include the launch of multiple DeFi protocols on the network, added support for METIS-based trading pairs on cross-chain protocols, and the network’s ability to offer Ethereum users lower transaction costs and faster processing times.”

Six days later, the layer-2 token crashed back down to $150. It stooped even lower over the coming weeks, dropping below the $100 mark.

In the following weeks, METIS made some progress. METIS has a unique tokenomics system where only half of its coins were minted at launch – the rest are then mined in phases. On 1 March 2022, it announced the next stage of this mining programme. Just under 5% of the total supply was minted and transferred to a treasury smart contract on Andromeda.

After the announcement, the TVL in MetisDAO saw a spike, along with the token’s price. At the start of March, METIS was sitting at $168 and largely traded sideways in the following weeks, until April ushered in an aggressive downtrend.

Following multiple market-wide crashes towards the end of the second quarter of 2022, the token suffered a steep decline in value. On 30 June, the token closed trading at $18.09.

As of 27 July, the token is currently trading at $29.27, up 12% in a recent 24-hour trading window, following a recent announcement on Twitter.

There are currently almost 4.4 million METIS in circulation, out of a max supply of 10 million METIS (44%). The market cap sits at around $128m, and METIS is the 238-largest crypto by that metric.

The consensus from METIS price predictions is for the token to soar over the coming years and reach a new all-time high. Some are even bold enough to forecast a price above $650.

DigitalCoinPrice estimates a more gradual increase. Its METIS price prediction expects the token to only reach the $57.81 mark in 2025. By 2030, MetisDAO is expected to hit $132.97.

WalletInvestor says the token is a “bad” long-term investment, giving a MetisDAO price prediction for 2022 that expects it to descend to $3.35 by the end of the year.

MetisDAO is an example of a platform and token with clear utility, providing a place for decentralised organisations to flourish. Experts and investors seem to appreciate this, as a strong future is predicted for METIS.

There are almost 4.4 million METIS in circulation (44%), with a maximum supply of 10 million.

It could be. Since launching its mainnet in 2021, a variety of platforms have integrated with MetisDAO. This utility has seen its price shoot up. However, METIS has also proved to be quite volatile, so you should never invest more than you can afford to lose.

The consensus from price predictions expects METIS to increase in the coming years. Some forecasts think the token will reach a new all-time high and eventually surpass the $650 mark.

Remember, however, that price predictions can be wrong, and that you should always do your own research before investing.

It depends. MetisDAO is transforming the decentralised autonomous organisation (DAO) market, making the process quicker, cheaper and more scalable. But its METIS token is still recovering from the recent market crashes.

What is a DAO: does the future reside in decentralised governance?
The material provided on this website is for information purposes only and should not be regarded as investment research or investment advice. Any opinion that may be provided on this page is a subjective point of view of the author and does not constitute a recommendation by Currency Com Bel LLC or its partners. We do not make any endorsements or warranty on the accuracy or completeness of the information that is provided on this page. By relying on the information on this page, you acknowledge that you are acting knowingly and independently and that you accept all the risks involved.
Cryptocurrency Blockchain
АWin-Win
referral programme
Learn more 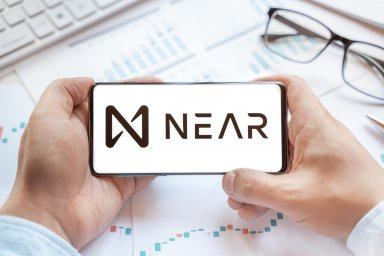