The S&P 500 index is a very important tool in analysing the markets. But what has it done in the past?

Standard and Poor's 500 (S&P 500) is a crucial tool for traders. If you want to invest in this US stock index, it makes sense to learn about S&P 500 historical data.

But before we look at historical data, let’s look at what the S&P 500 is and what it does.

Before we get into the S&P price history, let’s take a look at the history of S&P as a business.

According to the guidelines set out by S&P, a company becomes eligible for the S&P 500 if it meets the following criteria:

Meeting these criteria does not mean a company will automatically go on the S&P 500. Every three months, the S&P US Index Committee meets to decide which companies appear on the index, taking into account which sector a company operates in. For instance, if one particular sector makes up around a quarter of large businesses in the US, then the S&P 500 will look to accommodate around 25% of its makeup to that sector.

As noted, membership is not automatic. The index features both household names, such as Amazon, American Express, and Ford, and less well-known companies, such as Illinois Tool Works, Skyworks Solutions and Thermo Fisher Scientific.

Although S&P doesn’t reveal the names of committee members to the public, it does say:

Despite the secrecy, it is known that David M Blitzer, who maintained a high profile despite his membership of the committee,  chaired the committee from 1995 to 2019. The current CEO of S&P Dow Jones Indices is Dan Draper.

Another point is that while the S&P 500 features 500 companies, it often has more than 500 listings because some companies have two classes of shares, with one having more voting rights than the other. If the company is on the index, then both share types will be listed separately. However, the S&P committee has ruled that dual-class companies currently on the list will be the last ones to appear in such a format.

How the index score is calculated

The index score helps people understand how companies are doing and the overall strength of the market. It is calculated in the following way:

Find a company’s free-float market capitalisation by multiplying the price of its shares by the number of shares actively available in the market, excluding nominal, locked-in shares, such as those allocated to company executives and governments. Perform the same calculation for all companies on the index and add them together. Once you have done that, you then divide that figure. However, the divisor is not made public. Its job is to make the large numbers for the S&P float-adjusted market cap more manageable.

One way to explore the S&P 500 index price history is through this widget. 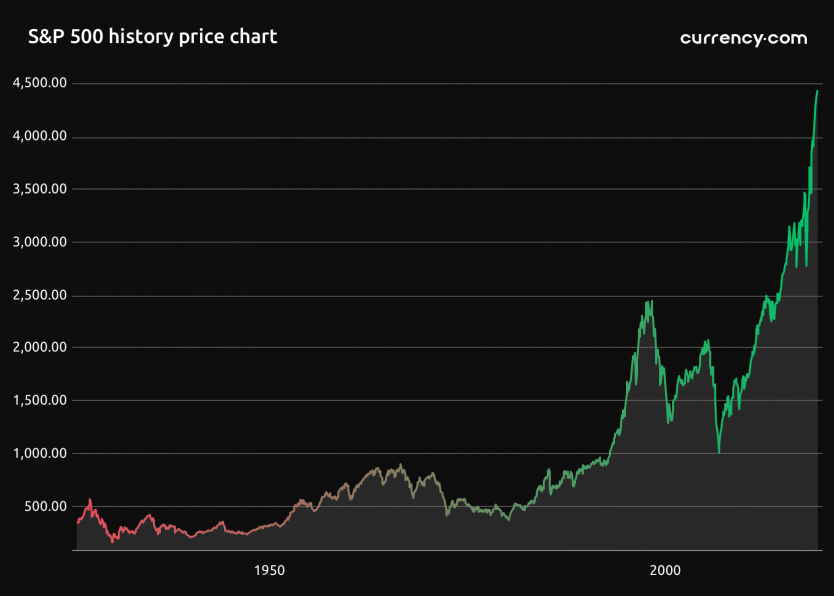 Although past results in no way indicate future performance, it’s helpful to have some idea of how things have gone. If you’re a trader, it can be useful to look at how the stock market has behaved during past events. For instance, if there’s another pandemic, then looking at the S&P 500 index historical data from 2020 and 2021 might give investors clues as to how the market will react to massive disruption in the future. Likewise, you can look at economic downturns. If you have the information on why they happened (which the index does not provide, so you should do your own research) and the markets’ reaction to them, you can make a more informed decision about what to do in similar circumstances.

S&P 500 historical data is also useful when it comes to assessing whether current price indicates future growth, looking at the index’s response to economic booms.

Analysis tools, such as zig zag graph, can also give traders an edge. But traders must do their own research and not rely on S&P 500 historical prices.

There are several ways to invest in the S&P 500. You can consider index-related funds, such as mutual funds. This is a fairly passive way of investing, which means you may not be able to take advantage of opportunities offered by short-term trading.

You can open positions via a bank or broker. This does have the drawback, though, of having your profits tied up with the amount you have invested, so there is no scope to trade in the margins. In addition, you cannot use cryptocurrencies to do this, you have to use fiat.

Through currency.com, you can trade with either crypto or fiat currency. You can also use our leveraged trading platform to open much bigger trading platforms, with a leverage of up to 1:100. You can take profit orders and our system can execute 50 million trades per second. However, you do need to do your own research, remember markets can go down as well as up, and never invest more than you can afford to lose.