Learn to trade The basics What is an NFT gallery?

What is an NFT gallery?

From Superchief in New York to Miami’s Blackdove, NFT galleries are on the up

Over the past year or so, non-fungible tokens, or NFTs for short, have made their debut on the international art scene. From Superchief in New York, the world’s first NFT gallery to open its doors in March 2021, to a host of established commercial and public galleries across the world hosting NFT dedicated exhibitions, NFTs have started to cross into the physical realm.

Previously limited in viewership to the creator, prospective buyer or owner of the NFT, the evolution from computer screen to physical exhibition spaces could help attract new audiences and potentially new investors to the world of NFTs. Displayed on large screens, these digital artworks, NFT enthusiasts no doubt hope, will help to demystify what is currently an opaque phenomenon to a more traditional art buying market.

From raising the exposure of NFT artists, to educating the public about this new from of “art”, NFT galleries could bring about a number of new developments in the space.

But will they be effective in the long-term? Is there a large enough audience? Is the displayed NFT the original? And if not, what are the implications of having audiences view reproductions?

NFTs, also called non-fungible tokens, are unique images, media or songs that are connected to a blockchain. Frequently created on the Ethereum blockchain, NFTs are unexchangeable with other items. This is due to the fact they have specific features that render them unique. Blockchain technology as an immutable ledger, acts as a proof of ownership that cannot be modified. The technology tracks the creation, selling and buying of the NFT. This, in theory, helps artists get royalties every time their work is resold.

In a typical NFT collection, such as the Crypto Coven collection featuring 9,900 illustrations of witchy women, each NFT has a similar style (for example, a head-and-shoulders portrait of a woman), but they possess differing features (for example, backgrounds, clothing, makeup and accessories). This helps create a sense of uniqueness.

In addition, NFTs represent ownership of a digital object. These tokens can be thought of as a certificate of ownership. Anyone can download the digital object, however, and often the artist retains copyright of the image, meaning they can in practice sell exactly the same image again. Some individuals compare buying an art NFT to buying an autographed print. In reductive terms, it is the code attached to the NFT that renders it unique and of value – you own the contract denoting ownership; you do not actually own an unreproducible digital asset.

NFTs have been hailed as a new invention whereby value can be ascribed to digital assets. In the digital age, prior to NFTs, images can be copied and reproduced infinite times. By creating these tokens of ownership the idea is that while someone may reproduce the image, they do not own the “original” certificate of ownership attached to the asset.

So where does the idea of an NFT gallery come into all this?

What is an NFT gallery?

Similar to digital art being displayed on ultra large screens, NFTs, in these emerging NFT specific galleries and exhibitions, are being blown up and displayed through screens.

The process of displaying digital art on screens is not a new phenomenon. What is new, however, is the way in which these works are valued and the financial infrastructure which surrounds them. A piece of video art by Steve McQueen, for example, is owned by him, meaning if anyone else tried to sell or display his work (without purchasing it), they would face legal implications.

Thus, in simplistic terms, viewing NFTs in a NFT art gallery is not viewing the original. The original is actually not the asset in the first place.

A host of important exhibitions have taken place over the past year. Major examples of NFT gallery exhibitions included: Virtual Niche – Have You Ever Seen Memes in the Mirror? at the UCCA Centre for Contemporary Art in Beijing; Chain Reaction, an NFT exhibition that took place in Atlanta and Boston through a collaboration between Chain Atlanta’s ABV gallery and NFT marketplace Nifty Gateway; and a NFT show called Breadcrumbs, hosted at Galerie Nagel Draxler in Cologne.

Are NFT galleries here to stay?

The art world is largely divided on NFTs. While some individuals perceive NFTs – and by extension the crypto industry in general – as a bubble waiting to burst, others believe it is a legitimate art movement that has staying power. 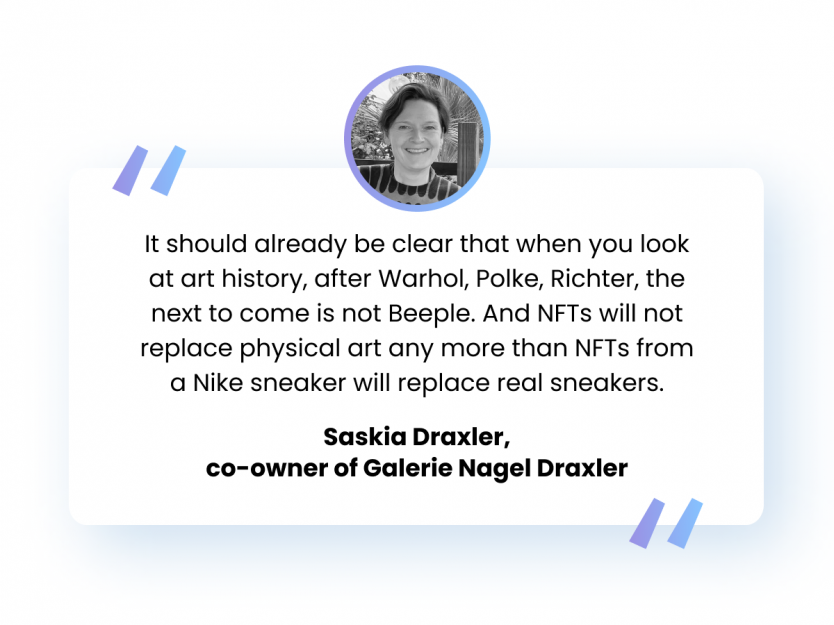 Fans of NFTs, however, have come out in droves to advocate for the phenomenon. 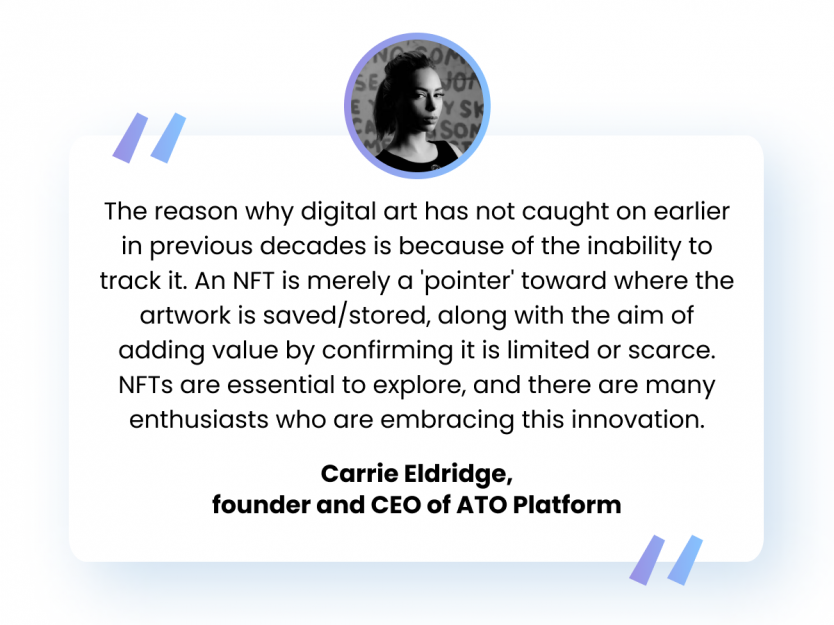 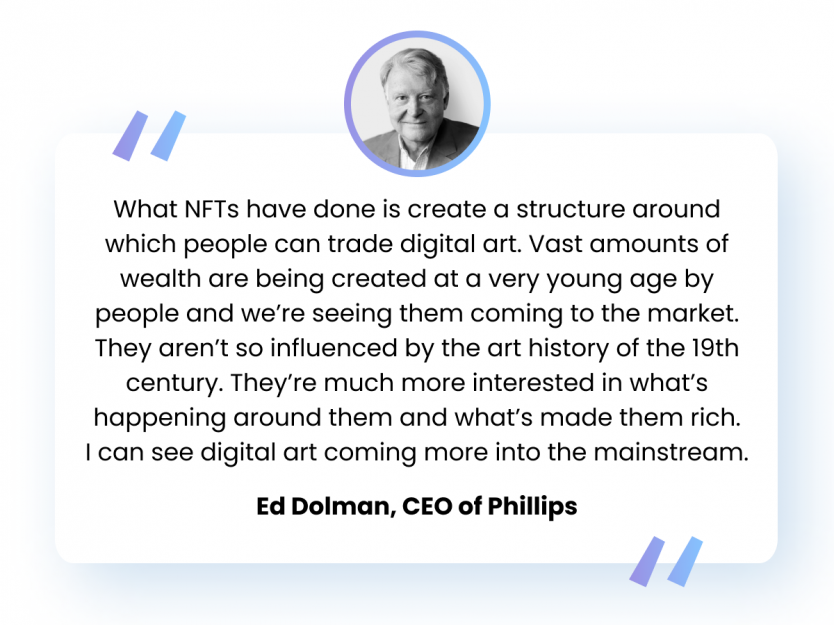 Whether the concept of an NFT gallery has any staying power remains a complete unknown.

Physical art and capitalistic drives have long been deeply intertwined. Many, for example, question why some pieces are valued so highly, while other pieces of art are valued at close to zero.

Physical art, in short, has long been a vessel by which to store huge amounts of cash. In order for physical works to be valued so highly however, they have first been admired for their physical qualities, historical importance, aesthetics, craftsmanship or a combination of all these factors. Thus, the function of these works as a store of wealth has come secondary to their attributes. NFTs, on the other hand, it could be argued, have been valued highly first and foremost as a store of value, and on a secondary level for their aesthetics.

The valuations that have been assigned to a Vermeer or a Rembrandt for example, are, while staggering, a result of the value placed on them over a long period of time by a huge number of people. This is in part what brings droves of people to an exhibition.

Whether there is a large enough audience for any NFT gallery to stay in existence remains to be seen. If prices keep rising, commercial NFT galleries will likely continue, buoyed up by the hype. Public interest in NFTs as a form of art is, however, unlikely to be the driving force of the NFT gallery phenomenon.

There are more than 80,000 NFT collections just on the Ethereum blockchain.

While some NFTs are incredibly valuable, selling for hundreds of millions of dollars, many NFTs are entirely valueless.

Cosmo Coin price prediction: Will cosmetics disruptor shine?
The material provided on this website is for information purposes only and should not be regarded as investment research or investment advice. Any opinion that may be provided on this page is a subjective point of view of the author and does not constitute a recommendation by Currency Com Bel LLC or its partners. We do not make any endorsements or warranty on the accuracy or completeness of the information that is provided on this page. By relying on the information on this page, you acknowledge that you are acting knowingly and independently and that you accept all the risks involved.
NFTs
АWin-Win
referral programme
Learn more 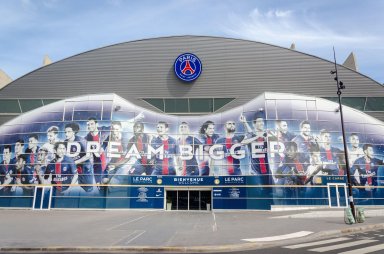 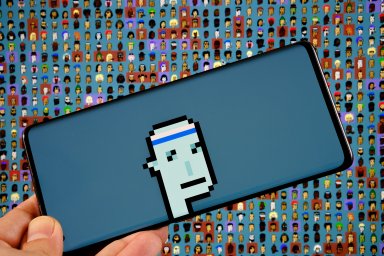 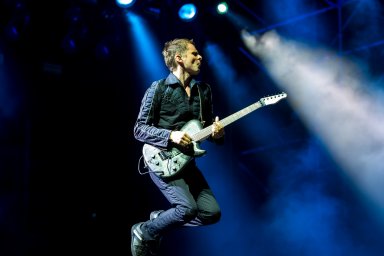