The Basic Attention Token is grabbing people’s interest. What’s it all about?

If you’ve been paying attention to cryptocurrency, you might have heard of the Basic Attention Token, or BAT. You may also be wondering what it is, how it works and how you can get hold of it. In this article, we’ll do our best to answer those questions – starting with some background.

Online advertising and its challenges

Advertising online is a big deal. In 2017 – the year BAT was launched – around $240bn was spent on online advertising, which was the first time digital ads outstripped traditional print, billboard and broadcast advertisements. In fact, Google made $79bn that year through advertising. It’s clearly a major industry, but the problem with online ads is that people don’t always pay much attention to them. Either the adverts are blatant and in people’s faces or they are pop-ups, which are annoying and get closed as soon as possible.

The other issue when it comes to online advertising is privacy. We’ve all seen it: you search for something online and the next thing you know, your social media feeds are full of adverts for the thing you looked for. While social media platforms analysing what their users search for online isn’t illegal, it can be unethical, especially if this data then gets sold on to another company. We end up in a situation where internet users have their privacy violated, online publishers – people who make websites, social media pages and videos – have a chunk of their advertising revenue siphoned off by the platforms they use, and advertisers themselves have to pay commission. Things are not working as beneficently or as efficiently as they should.

This has meant the advertising industry has had to face a challenge. How can it reach people online, keep their attention and, in doing so, get them to buy the products being advertised? How can users not feel like internet companies are trying to invade their privacy? And how can publishers generate advertising revenue in a fair and targeted way?

In 2016, Brendan Eich, the software developer who created JavaScript and founded the Mozilla project, announced he was going to launch a new browser that would, hopefully, solve these problems. The Brave browser was designed to block ads and trackers by default. It was run on open source code, and would protect the privacy of users. The browser would use the Basic Attention Token (BAT) as a method of payment. But how would that work?

What is Basic Attention Token?

Basic Attention Token is based on the Ethereum blockchain network, and it is used as a utility token. The idea behind it is relatively straightforward. 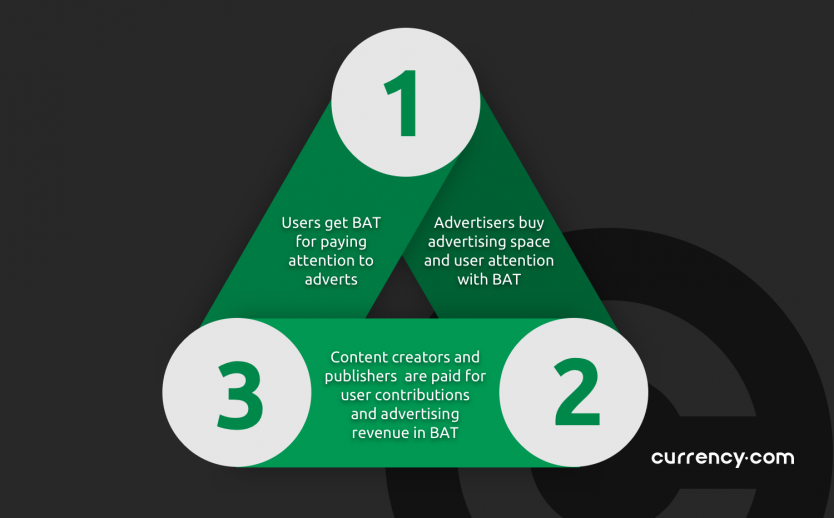 So, what does it mean when we say users get paid BAT for watching adverts? Well, with Brave, the idea is that people can choose to watch adverts. If they do, then they get a small payment in the Basic Attention Token. Likewise, content creators and publishers. But, how is this done? It’s done through a system called Brave Payments. This determines a user’s contribution as they browse, automatically calculating how much people get at the end of each month based on time spent viewing content. Users can also make specific contribution amounts regardless of time spent viewing content, much like a site like Patreon does.

The overall idea is that the Basic Attention Token and the Brave browser are changing, or are at least designed to change, the way online advertising works. Rather than using third party tracking and all the hassle and difficulties that entails, users get adverts matched and delivered on their own device locally, from an inventory of available ads and offers. This means that users browsing history is kept private, that the browser and platforms can work together to decide if the user is in the right place to get an advert, and that browsing is faster, because adverts are being loaded locally.

So, that’s how Basic Attention Token works. But what of its value? Where is it, where has it been, and what might happen to the BAT coin in the future?

Like a lot of cryptocurrencies, things started to change for the BAT coin in 2021. A growing market benefited the Basic Attention Token, and it shot up in value. It started the year at $0.2015 and, as the market speeded up, its value grew. It stood at $0.3011 at the end of January, but when February finished, it was worth $0.4899. March was even better for the Basic Attention Token price. It reached a high of $1.3294 on 18 March and, while it was down to $1.1233 at the end of the month, its price was up by just over 273% in the course of three months. Things got even better in early April, and it reached an all time high of $1.65 on 9 April. However, the market seemingly corrected itself and this, coupled with the crypto crash of 19 May, meant the value of Basic Attention Token was down. It reached a low of $0.5069 on May 23 (a drop of 69% in around six weeks), but there have been some signs of a slow recovery since then, with it heading back to $0.7436 on 4 June.

Is the Basic Attention Token a good investment?

It could be. If you are a proponent of the “buy in the dip” mantra and you think that the market will recover from the recent losses, now might be a good time. However, it is equally true that the recent crash was nothing more than the cryptocurrency market, which had been booming in the first few months of 2021, correcting itself. As ever, you should do your own research, remember that cryptocurrencies are highly volatile, the value of your investment can go down as well as up, and never invest more than you can afford to lose.

How high can the Basic Attention Token go?

We don’t know. Predictions seem to be cautiously optimistic, at least in the long term. Remember that forecasts are never set in stone, and you aren’t going to end up getting wealthy from your cryptocurrency investments overnight. Price rises take time to happen.

How to acquire the Basic Attention Token

If you want to acquire BAT coin, there are two options. You can either use the Brave browser and sign up to the browser’s wallet. You will get paid in Basic Attention Token when you watch an advert on the browser. The other way to get your hands on some is through crypto exchanges. You can either purchase it through fiat currency or by exchanging some of your cryptocurrency.

Theta coin: What it is and how it’s used
The material provided on this website is for information purposes only and should not be regarded as investment research or investment advice. Any opinion that may be provided on this page is a subjective point of view of the author and does not constitute a recommendation by Currency Com Bel LLC or its partners. We do not make any endorsements or warranty on the accuracy or completeness of the information that is provided on this page. By relying on the information on this page, you acknowledge that you are acting knowingly and independently and that you accept all the risks involved.
АWin-Win
referral programme
Learn more