Learn to trade The basics Chia coin explained: What is it and how does it work?

Chia coin is one of the hottest new cryptos around. But what’s it all about?

What is chia coin?

The chia cryptocurrency is based on the Chia Network, which was set up by Bram Cohen, the creator of the file-sharing system BitTorrent, in 2017. The chia coin itself was launched in May 2021.

You may be asking what is chia coin? How does chia coin work? Well, what sets chia coin apart from other cryptocurrencies is its commitment to being environmentally friendly. The way chia coin is extracted is called farming, rather than mining. This gives the impression of something gentle, agricultural and good for the environment, compared to bitcoin’s reputation for being  detrimental to the environment. But it isn’t necessarily a question of semantics.

Incidentally, don't confuse farming with pharming, a fraudulent system of redirecting users to fake sites. It’s important not to mix the two up.

Chia’s commitment to green values helped get it noticed in May 2021, when Tesla CEO Elon Musk said he did not want his company to take bitcoin any more because of the environmental damage caused by bitcoin mining.

How to mine chia coin

So, what’s the difference between farming and mining? Here’s farming chia coin explained.

Cohen says the problem when it comes to mining cryptocurrencies in an ecologically minded way lies in the fact that, traditionally, they work on the proof-of-work (PoW) algorithm. This algorithm protects the blockchain from abuse, forcing each of the participants in the system to perform a certain, usually complex, task that in turn requires significant computing power, which uses energy, which is often harmful to the environment.

Chia coin, on the other hand, offers a fundamentally different algorithm for the operation of its system: Proof of Space and Time. In this case, the main resource for token mining is not the implementation of complex mathematical tasks (as in the case of proof-of-work) but the free space on the hard drives of blockchain participants. The more free space a chia farmer has on their drive, the more tokens they can earn.

The creators of chia coin claim that the use of a different algorithm significantly increases the energy efficiency, and therefore the eco-friendliness, of their altcoin.

What’s notable is that you do not need a very powerful PC for farming chia (XCH). According to the official minimum requirements, the computer must be equipped with a quad-core processor, two gigabytes of RAM, and an SSD (solid-state drive) with a minimum of 360 GB of free space, plus the software itself.

However, it’s also worth pointing out that the more powerful your computer is, the more efficient and successful its chia farming will be. Those who have tried to farm the altcoin with a system close to the minimum requirements say that, according to preliminary calculations, farming can take up to several years (using a special chia farming calculator, you can calculate how long it will take to farm coins on your system).

At the same time, the creators are pushing the user-friendly orientation of their virtual currency. Cohen says that anyone who knows how to use the internet can farm XCH, and that you can do it from the comfort of your own home.

The creators of XCH also talk about the increased security of their cryptocurrency, which is achieved through the use of their own programming language, Chialisp.

Nevertheless, at the end of May, the company Chia Network – the creator of the cryptocurrency – was valued at half a billion dollars, and during the last round of funding, it managed to raise $61m. 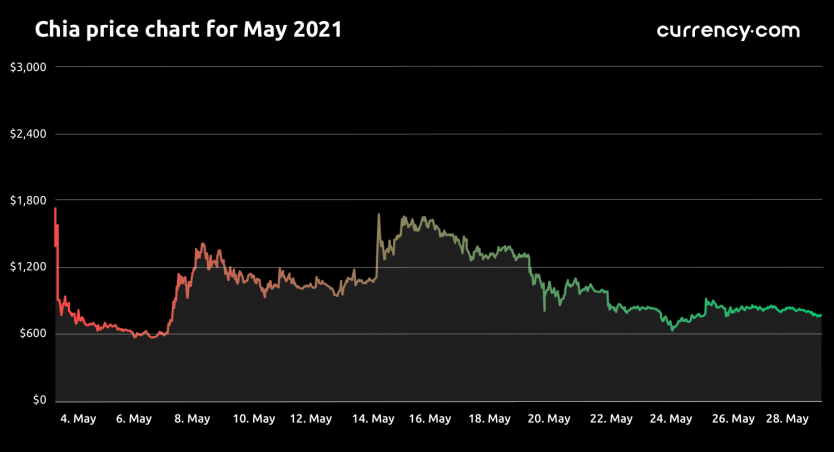 There are already big questions about the main selling point of chia coin – the ecology of its extraction compared to traditional crypto mining. Hard drives, which are needed for farming the altcoin, are not made of thin air, and their production also affects the environment.

One of the largest manufacturers of hard drives, Western Digital, has already reported an increase in demand for its products, and in Asia there has been a shortage of devices. According to Tom's Hardware, due to high demand, the cost of popular hard drive models has increased by as much as $300, a repetition of the graphics card shortage that was prompted by the bitcoin mining rush.

In addition, German internet provider Hetzner officially banned users from producing XCH on its servers at the end of May. The company claims that due to people trying to get hold of the virtual currency, the load on its equipment increased significantly, which caused hard drives to fail.

According to Hardware Times, chia farming can wear out 512GB of SSD in less than two months (when, normally, a drive would run for up to five years) and one terabyte in under three months. The question is whether farming a cryptocurrency that forces you to buy a new SSD every few months is as environmentally friendly as it’s made out to be.

That’s the chia coin news so far, but what of the future? Although it's a fairly new crypto, some people are already making a chia coin price prediction. DigitalCoinPrice says it will reach $1,119.11 at some point in 2021, $1,337.41 in 2022, $2,727.05 in five years’ time and $3,593.51 in 2028. This looks good but, as ever, please remember that predictions are not set in stone. Unforeseen events can happen to markets and cryptocurrencies are usually rather volatile.

Is chia coin a scam or legit?

It is a new setup, meaning it hasn’t used a fork or an alteration to the existing code, and it uses software which, theoretically, anyone can use. However, just because it may not be a scam, that doesn’t mean that it can’t fail. If you want to invest in chia coin, you need to do your own research.

How many chia coins exist?

As of 27 May 2021, there are currently 21,687,614 chia coins in circulation, with 687,614 of them having been farmed and the remainder being the ones that were available at the cryptocurrency's launch. More chia coins will be available when more are farmed.

Is chia a good investment?

It’s still early days, though. Bear in mind that, while the predictions are positive, chia coin is still down from where it started when it launched at the start of May 2021. As ever, remember to carry out your own research and never invest more money than you can afford to lose.

How to buy chia coin

If you want to buy chia coin, it is available on the OKEx, Gate.io, MXC and DigiFinex exchanges as of May 2021.

Please note that if you want to buy chia, you first need to purchase a Tether stablecoin (USDT) pegged to the dollar, or bitcoin (BTC). You then use these cryptos to buy your chia coin.