Learn to trade The basics What is DigiByte? Your ultimate guide to DGB coin

DigiByte’s goal is to become the fastest, most secure and most decentralised blockchain

DigiByte, launched in 2014 by creator and founder Jared Tate, is changing the assumption that blockchains cannot be secure or scalable. Its recipe for success is a three-level blockchain that allows for fast, secure and scalable transactions.

Although it has a founder, DigiByte is truly unique as it does not have a centralised team working on the project. Instead, it is run by volunteers from within its global community. Achieving progress as a decentralised team of developers can be difficult, and DigiByte has faced barriers. But the team has managed to create a blockchain with a distinctive set-up.

If you are wondering how it works and what is DigiByte used for, keep reading for an explanation of everything you need to know about DigiByte.

How does DigiByte work?

Like many technology companies, DigiByte started when its founder, Jared Tate, built it in his garage in 2013. The aim of DigiByte was to be the most decentralised, secure and fastest blockchain. The recipe for this is through the blockchain’s set-up and the different layers.

DigiByte’s website describes the top layer as an “app store”. This is where decentralised apps (DApps) can be built and used. It is important to the DigiByte team that all these DApps have “clear real-world” uses, whether that is assets that represent real estate or protect documents securely. Smart contracts, which utilise the secure aspects of the blockchain and can be encoded easily, are created on this layer as well.

Security is mainly addressed on the second layer, which records all the transactions of the DigiByte cryptocurrency (DGB). DigiByte claims the currency cannot be counterfeited, duplicated or hacked. The blockchain uses five Proof-of-Work (PoW) algorithms to ensure this. Each of the algorithms is used for mining, and they are all equally weighted at 20% each.

The computers and hardware running the DigiByte blockchain are able to communicate with each other through the third layer. Everyone who is using the DigiByte network becomes a node that communicates with other nodes and relays transactions. By having the layers split for different purposes, this allows transactions and other processes to run much faster. The Digibyte team says that DigiByte blocks occur every 15 seconds, which is 40 times faster than the Bitcoin blockchain.

Aside from its unique set-up, DigiByte is special because it is run by volunteers. There is no CEO or central organisation that runs the blockchain. Instead, there is a team of volunteer developers. This is how DigiByte remains decentralised.

What is DigiByte (DGB) cryptocurrency?

The goal of DGB is much like that of other cryptos: to be a decentralised alterative to fiat money. As it is minted on the DigiByte blockchain, it has the same advantages as other cryptos – it is fast to mine and it is decentralised. Another priority for the team was accessibility: the transaction and mining fees are described as “negligible” on the website.

The DGB team kept scalability in mind when developing the currency. There is a circulation supply limit of 21 billion DGB, which is a thousand times more than bitcoin (BTC). The reason for the higher limit is because the coin was designed for mass adoption.

The block rewards for miners will decrease gradually, at a rate of 1% every month. By 2035, all DGB will be mined, and miners will only profit off the transaction fees. This may be a problem for DigiByte as one of the priorities of the blockchain is to keep transaction fees low, which takes away the financial motive for miners after all the blocks have been mined.

The number of mined DGB coins is quickly approaching the limit. Currently, there are 14.86 billion DGB in circulation. It is ranked number 132 on CoinMarketCap, with the price at $0.05, as of 22 November.

DigiByte is not only being used for its native currency, but also a platform for creating digital assets. In 2019, the team thought the project was secure and scalable enough to launch DigiAssets – a digital and decentralised-asset platform that can be used to represent anything in the real world.

These assets can range from airplanes and boats to art and music. Signed documents can be represented as well, including wills, deeds and medical bills. These documents can utilise the many security elements of the DigiByte blockchain to keep the asset safe.

The first DigiAssets were created by Tate in April 2019 – the DigiTorch and DigiFlame. These assets were designed to be passed to along to the community members as they build new assets on the platform.

Keeping momentum going without a centralised team can be difficult, but DigiByte has managed to make continued progress to the project. This has been praised by many financial experts. SA Shares, a South African financial publication, said in its review that DigiByte had shown steady and solid progress over the past seven years it has been in operation.

SA Shares pointed to “issues” that the volunteer team has  with “commitment to dates to accomplish future projects”. The DigiByte team has been working on version 8.22 for a while now. The company announced in August that a huge chunk had been completed, but the new update has not been widely integrated yet. However, SA Shares did say the community commitment means there is promise for more to come.

A strong community is vital to a decentralised project like DigiByte, and so far, the blockchain has proved it has one. CoinBureau said: “With over six years of development, it’s clear DigiByte is here to stay, and it’s just as clear that the community will continue developing and improving the blockchain while also getting the word out regarding the obvious benefits DigiByte brings in terms of security, scalability, efficiency and speed.”

As of 22 November, there is a circulation of 14.86bn DGB coins. However, this is over two-thirds of the way to its supply limit of 21 billion DGB.

It might do. SA Shares said that despite the slow updates, there is promise for more to come due to the strong community. The publication also praised the steady progress the blockchain has made over the past seven years.

CoinBureau has also recognised the strong community presence as a positive factor. It said the DigiByte community has got the “word out regarding the obvious benefits DigiByte brings in terms of security, scalability, efficiency and speed”.

However, other analysts and commentators may not always be accurate in their assessments. If you are interested in investing in DGB, you should do your own research – and remember, never invest more than you can afford to lose.

DigiByte can be bought on various exchanges. It was added to Huobi in 2018 and Binance in 2020.

Other exchanges that list DigiByte include Mandala Exchange, OKEx and Upbit. 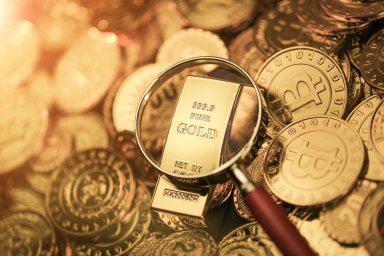 What is bitcoin gold? Your ultimate guide