Learn to trade The basics What is Green Satoshi Token (GST)? Your ultimate guide

What is Green Satoshi Token (GST)? Your ultimate guide

So, what is Green Satoshi Token (GST)? Well, put simply it is used to reward people who take part in the STEPN move-to-earn (M2E) app. Let’s take a look at the GST coin (as some might call it) and see what we can find out about it.

Moving for crypto: What is Green Satoshi Token (GST)?

One of the more notable tech success stories of the last 10 years or so has been the growth of fitness applications. These virtual pedometers track how many steps you take in a day – that is if you are carrying the device, such as a mobile phone or a watch, that it runs on – and let you know how much you have done or how much you need to do.

With cryptocurrency serving as another big booming tech sector over the last decade, it was, perhaps, inevitable that the two linked up. And, in 2017, it did… with the Triffic app. Now, Triffic did not do terribly much – you basically walked around your local area and collected certain ‘power-ups’ as it tracked your progress, sort of like a blockchain-based version of Pokemon Go – but the idea was there. Talking of Pokemon Go, Nintendo’s mobile game, which was all the rage in 2016, and still has a fair few users, meant that exercise-based apps did not necessarily have to be dry, dull, austere and technical.

Nevertheless, Triffic, ultimately, was only ever really a niche product, largely because, as we have said, there were not that many features in it. In order for what we should probably call an M2E blockchain world to succeed, it was, perhaps, best to wait for the arrival of the next big development in blockchain technology.

Whether non-fungible tokens (NFTs) represent a big development as such is another debate for another time. What cannot be denied, though, is that they have proven to be pretty popular. The idea of owning the rights to a link with a unique piece of artwork was originally a niche activity, but, over the course of 2021, NFTs became big business, with people and organisations – who otherwise would have had absolutely nothing to do with the blockchain and cryptocurrency – jumping on the bandwagon.

The link between NFTs and the metaverse –- basically, the big virtual online world – meant that both crypto sectors proved to be the real success stories over the second half of 2021. Since then, while the market has cooled down somewhat, there are still people who are more than willing to buy, sell and trade NFTs. And, out of the NFT enthusiasts across the cryptoverse, there will be a few who want to live healthy lifestyles. This is where STEPN comes in.

STEPN is, to put it very simply, a cross between an NFT marketplace, a play-to-earn game and a fitness app. If you want to start using the system, you will need to get hold of an NFT. You can either buy them outright or rent them, in which case the owner gets a share of your rewards.

There’s more on the rewards to come, but first we need to point out that the ability to rent appears to have been popular enough that, as of 10 June 2022, no STEPN NFTs had been sold in the previous week, according to the nft-stats.com website.

At the same time, the minimum price of a STEPN NFT was five SOL, or a little under $200. When you see that other fitness apps have a free-to-use function, it is perhaps somewhat understandable that some people appear to prefer renting their sneakers.

What is Green Satoshi Token coin used for?

Anyway, if you do want your own sneaker, you can buy one with a range of different attributes, including comfort, resilience and efficiency. Once you have that, then you can start walking, jogging or running outside to earn yourself rewards. These rewards are paid in the Green Satoshi Token (GST).

There are, in theory, two different types of Green Satoshi Token cryptocurrency. One is based on the Solana blockchain and the other is based on Binance Smart Chain. This, as the crypto’s name suggests, means that it is a token, rather than a coin. However, there is a good chance you will hear references to the GST coin from time to time, even if they aren’t, strictly speaking, accurate.

In order to earn GST, players can take part in the system’s solo mode. According to the whitepaper: “Users are equipped with NFT Sneakers to earn tokens by moving. Energy is needed to earn Green Satoshi Tokens (GST). Every one Energy equals five minutes of move-and-earn movement and Energy which ONLY starts replenishing after users acquire an NFT Sneaker. To begin, users select a Sneaker of their choice, and press Start.”

For what it is worth another mode, Marathon, is currently in development.

If you own your own sneaker NFT, you can earn 100% of the GST earmarked for whatever it is that you choose to do in solo mode, while if you rent a sneaker, you only earn 70%, with the rest going to the sneaker’s owner.

There is also an environmental factor to what the system does. The platform’s litepaper says a portion of the profits that the platform gets from the taxes it takes from in-app activities goes to buy carbon removal credit on the blockchain to help combat climate change. According to the same documentation, the idea behind the scheme is to “inspire millions to a healthier lifestyle, connect them to Web 3.0 and combat climate change”.

There is a cap on how much energy and tokens someone can earn in a day. The platform is also developing social elements that, it says, will be revealed once all the gaming elements have been finished.

How does Green Satoshi Token work?

In terms of GST itself, it is a fairly straightforward token. As we have seen, it is used to reward the game’s players. The Solana version of the token came out in March 2021, while the BSC version started being traded in May 2022.

Every time someone either buys, upgrades, or repairs their sneakers, then GST is burned in an attempt to keep the token’s value up. For clarity’s sake, GMT – the token that has the STEPN name – is used to allow people to vote on changes to the network.

So that is GST explained. Before we go, it is important that we mention a few things. First, at least in terms of CoinMarketCap’s listings, there are two versions of this token, using similar blockchains. While they both do the same thing, it might be worth making sure that, if you want to invest in GST, you make sure you get the version you want to get.

You also need to be clear that GST is not the same thing as GMT, even if, ultimately, they were created by the same people and are involved with how the STEPN platform works. Before you do any of this, though, you will need to make sure that you do your own research, bear in mind that prices can go down as well as up, and never invest more money than you can afford to lose.

Green Satoshi Token cryptocurrency is used to pay rewards to people using the STEPN blockchain fitness app. It can also be bought, sold, and traded on exchanges.

GST operates on the Solana blockchain and the Binance Smart Chain.

It might do. That said, cryptocurrency can be incredibly volatile, so it is just as likely that it can go down, too. You must remember to do your own research, and never invest money that you cannot afford to lose.

What is Stepn (GMT): The fitness app turning miles into money
The material provided on this website is for information purposes only and should not be regarded as investment research or investment advice. Any opinion that may be provided on this page is a subjective point of view of the author and does not constitute a recommendation by Currency Com Bel LLC or its partners. We do not make any endorsements or warranty on the accuracy or completeness of the information that is provided on this page. By relying on the information on this page, you acknowledge that you are acting knowingly and independently and that you accept all the risks involved.
Cryptocurrency Blockchain Tokens NFTs Coinmarketcap Metaverse
АWin-Win
referral programme
Learn more 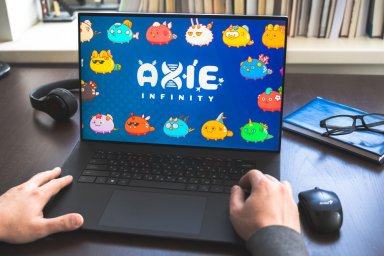