Learn to trade The basics What is ocean coin: your ultimate guide

What is ocean coin: your ultimate guide

Ocean coin is an interesting token, let’s take a look at it

Ocean coin is a cryptotoken that aims to allow people to access data while maintaining users’ privacy. But before we can talk about what ocean coin is and  how ocean coin works, we need to tell you about Ocean Protocol.

The idea behind the protocol was fairly straightforward. What if, rather than data being controlled by massive companies like Apple, Microsoft and Google, it could be shared and monetised on an exchange?

The software, which is based on the Ethereum network, allows data owners to capitalise on their data without having to compromise on its security or give up control.

The protocol uses data tokens to bar access to data. If you want to access the information, then you have to redeem your tokens. The idea is to let people access data while the people who hold the data keep hold of it. We can split the network into three main users:

Users can create a decentralised marketplace which keeps records of what data is there, who owns the data, and who shares and exchanges it. Rather than using the traditional trading method of making bids, it instead uses liquidity pools to allow trades to be settled through a range of smart contracts –  snippets of code that automatically execute an agreement when the right criteria are met.

To protect people’s data, Ocean uses a system called compute-to-data. This lets data tokens give permission to consumers to use parts of their data sets to do certain jobs while keeping parts of the set private. This means providers have some flexibility when it comes to what and when they sell.

A lot of Ocean’s biggest supporters are involved in AI research, and there are also developers on board who want to use the data available via the protocol to carry out tokenised data exchanges.

One notable practical example of the protocol being used took place in 2019 when Singapore car dealership SG Car Mart integrated it into its own system, meaning potential buyers could use ocean to get accurate and verifiable data on their used-car purchases.

This meant the system was able to tell people how many previous owners their car had, or whether it had any notable ongoing mechanical problems.

The protocol’s significance was shown when, in June 2021, it was awarded the status of Technology Pioneer by the World Economic Forum.

So that's the Ocean Protocol. But what is ocean coin? Let’s find out.

Ocean coin is the native crypto token of the Ocean Protocol. If you’re wondering what ocean coin is used for, it allows the protocol’s users to do four things.

There are currently 613,099,141 ocean tokens in circulation, which represents roughly 43% of the total supply of 1.41 billion. The coin’s entire supply will be released by around 2070, although 1 billion should be available by early 2031.

Ocean coin was launched in 2017. At launch, 20% was allocated to the project founders; 15% to buyers who spent a total of $26.8m on 160 million coins over several coin offerings; 5% went to the Singapore-based, non-profit Ocean Protocol Foundation, which backs the protocol; and the remaining 60% were set to be released to people who would serve as keepers of the network’s nodes.

That’s ocean coin explained – let's take a look at ocean coin’s price history to see how it’s done in the past.

When ocean coin first started being traded publicly on crypto exchanges in the middle of 2019, it mostly traded between the $0.02 and $0.035 range according to CoinMarketCap, briefly dipping to 0.014 in early August and 0.017 towards the end of the month. 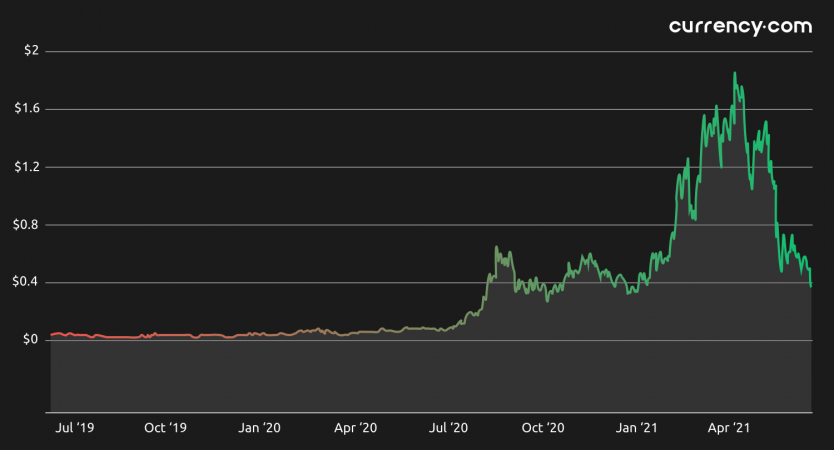 On 23 February 2020 it went above $0.07, but then fell back down in March, dropping to around $0.026 in the middle of the month as the coronavirus pandemic affected most markets.

On 9 July it had made a strong enough recovery to reach $0.1 for the first time, and the next few months showed some sizeable growth. On 18 August it reached $0.59, but by early September it was back down to $0.32.

It stayed around this range for a while and then in late September 2020, disaster struck. The KuCoin exchange was hacked in the biggest raid of the year and $150m-worth of cryptocurrency stolen – including 21 million ocean coin worth $8.6m.

As a result of the hack, Ocean Protocol immediately initiated a hard fork. This was good news for the token’s value, and in early November it briefly broke through the $0.5 barrier before trending down to trade at around 0.32 by the end of the year.

Crypto was in a very positive place in early 2021, and ocean coin benefited from the growth of the market. On 21 February it was worth more than $1.25. That price wasn’t immediately sustainable, though, and it dropped to just under $0.84 on 28 February.

There were some peaks and troughs before reaching a year-to-date high of $1.81 on 8 April. However, it has since been hit by the general crypto sell-off and at the time of writing (June 23) trading  at around $0.43.

Ocean coin was initially released in 2017, but it was not widely available on exchanges until the middle of 2019.

If you’re interested in buying ocean coin, you can do so on currency.com. Just remember to do your research and don’t invest more than you can afford to lose.

Always remember your decision to trade depends on your attitude to risk, your expertise in this market, the spread of your investment portfolio and how comfortable you feel about losing money. 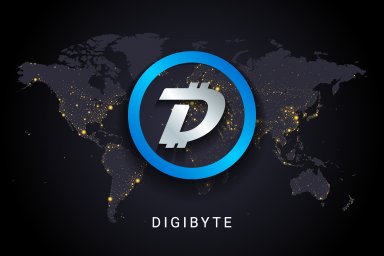