Learn to trade The basics What is shiba inu coin? Your ultimate guide

What is shiba inu coin? Your ultimate guide

Is shiba inu coin the next big thing? Find out more about it here.

The rise of dogecoin over the last year or so has certainly turned heads. The coin was set up as a joke intended to parody the plethora of new cryptocurrencies coming onto the market at the start of the 2010s.

But people wanted to invest and eventually the value of DOGE rocketed. It became a crypto coin to be taken seriously, with a significant market cap and a wide array of investors and supporters.

When Tesla CEO Elon Musk started hyping it, its popularity grew even more. It is now one of the coins that comes up in most crypto conversations.

The success of dogecoin demonstrated that people who liked cryptocurrency were willing to take a risk on a new, untested coin. It also showed that a coin could see its value rise through a combination of viral marketing, an enthusiastic fan base and pretty much its own force of will.

There have been times when it’s felt like DOGE is successful simply because people want it to be.

Whenever something becomes successful, others try to do something similar – and Dogecoin is no exception. In 2020 and 2021, the number of so-called meme coins expanded significantly.

One of the most interesting is shiba inu, the self-proclaimed DOGE-killer. This was set up by a mysterious founder, known only as Ryoshi, in the middle of 2020. At first glance you might see a cryptocurrency with a shiba inu dog as a mascot and think it’s just a rip off of DOGE, but it’s worth a look.

The idea behind SHIB was to create a cryptocurrency that was, in theory, 100% decentralised and run by its community. It’s based on Ethereum, unlike DOGE, which is based on Bitcoin.

It’s also worth noting how many shiba inu coins there are. As of 15 June 2021, there were 394,796 billion in circulation. However, what’s even more remarkable is that there are one quadrillion – a million billion – shiba inu coins.

This means that, for the time being at least, the price of a shiba inu coin is going to remain relatively low. That isn’t to say that it won’t go up at some point, but the sheer size of the potential supply does depress the price.

You would think it couldn’t reach the hallowed $1 mark without causing some serious financial disruption. However, as we will see, the low price of the shiba inu coin does mean there’s potential for growth so long as people keep expectations within reason.

What is your sentiment on SHIB/USD?

Why not give SHIB/USD a try?

Think of it in terms of being able to get your car serviced, rather than buying a Lamborghini. Indeed, as Ryoshi wrote in the SHIB white paper: “We have the ability to outpace the value of dogecoin exponentially, without ever crossing the $0.01 mark.”

The other thing to note about the number of shiba inu coins is that half of the total supply was given to Ethereum founder Vitalik Buterin. In Ryoshi’s words: “There is no greatness without a vulnerable point and as long as VB doesn’t rug us, then SHIBA will grow and survive.”

Although Buterin didn’t necessarily pull the rug from under the crypto, he did burn 90% – the equivalent of 410 trillion tokens, worth approximately $6.7bn – in May 2021. Speaking at the time, he said: “I don’t want to be a locus of power of that kind.”

Also in May, Buterin donated 50 trillion coins, worth around $1.2bn, to the India COVID-19 Crypto Relief Fund. The billionaire said that was an “opportunity to turn the meme bubble into something that could actually do good for people”.

The next thing for shiba inu is the foundation of its own exchange, ShibaSwap. This will allow people to exchange their SHIB for other cryptocurrencies in a decentralised exchange. Users can also get hold of Shiba’s other crypto, Leash, and the soon-to-be launched Bone. No date has been given for the launch of ShibaSwap yet, although the company says that it’s “undergoing security tests, audits and final updates to prepare for a safe launch”.

Shiba inu coin has a devoted online fanbase. Considering its very low value and utility, having around 30 Facebook groups dedicated to it, as well as a subReddit with 172,000 members, is pretty impressive.

Although these sites are not exactly the place to go for reasoned discussions about cryptocurrency trends, you do have to give them credit for being positive, upbeat, enthusiastic and welcoming places for people interested in SHIB. There are certainly a fair number of shiba inu coin evangelists online, so it seems reasonable to think that this meme coin isn’t going to go away just yet.

Talking of SHIB’s value, let’s take a look at the coin’s price history. When it launched in August 2020, it was worth somewhere in the region of $0.0000000001. It stayed around that level for most of the first nine months of its existence. 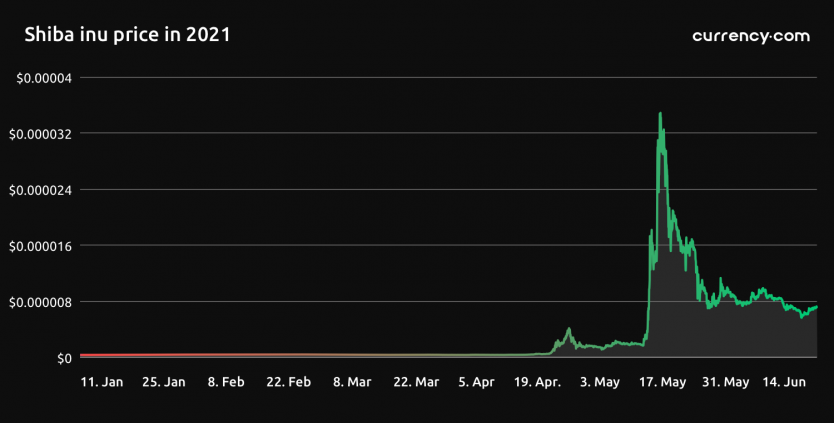 It seems to be. While it would be nice to know exactly who or what Ryoshi is, SHIB seems to behave like most cryptocurrencies. People can buy it and trade it on exchanges, and there are no hidden features. While it’s not as dynamic as other cryptos, any failings it might have aren’t built in and don’t seem to be intended to trick people out of their money. In other words, whatever you might think of shiba inu coin, we don’t believe that it’s a scam.

How many shiba inu coins are there?

There are 394,796 billion in circulation and one quadrillion in total.

What is shiba inu coin used for?

At present, it’s only really used as a method of transaction on exchanges. However, the coin does have the potential to be used for other things. Just because it doesn’t have very much use now doesn’t mean it won’t be useful in the future. We have to wait for ShibaSwap to launch and see if anything happens there. It’s worth noting that the proposed Bone token will allow holders voting rights on ShibaSwap, so it will be interesting to see if there’s something similar for SHIB.

Chia coin explained: What is it and how does it work?
The material provided on this website is for information purposes only and should not be regarded as investment research or investment advice. Any opinion that may be provided on this page is a subjective point of view of the author and does not constitute a recommendation by Currency Com Bel LLC or its partners. We do not make any endorsements or warranty on the accuracy or completeness of the information that is provided on this page. By relying on the information on this page, you acknowledge that you are acting knowingly and independently and that you accept all the risks involved.
АWin-Win
referral programme
Learn more