Learn to trade The basics What is Solana? A guide to the network and coin

What is Solana? A guide to the network and coin

You might have heard about it, but what is Solana? This guide aims to tell you

Solana was founded in 2017 by Anatoly Yakovenko, who had previously worked as a senior staff engineer manager at Qualcomm before moving to Dropbox to work as a software engineer. The idea behind Solana was to speed up the way transactions on a blockchain took place.

It is fair to say that Solana is part of the whole decentralised finance (DeFi) online ecosystem. The idea is to allow people to take part in financial transactions without necessarily having to go through banks. Probably the most notable thing in DeFi is the Ethereum network. Solana has been set up, at least partially, to serve as a rival to Ethereum. Whether it can serve as an “Ethereum Killer”, though, remains to be seen. The Ethereum ecosystem is massive and, as a newcomer, Solana will have some catching up to do if it wants to reach those heights. That is not to say that it can never happen, but it isn’t happening just yet. As we shall see, the most optimistic solana price prediction for the long term is far below the ETH price of around $2,270 as of 6 July at 12:00 UTC.

What potentially sets Solana apart from other similar systems is something called Proof of History, or PoH. Most crypto coins operate on something called Proof of Stake (PoS). This means that if someone holds a coin and wants to mine a coin, then the amount of coins they can mine is linked to the amount of coins they hold. It is used by altcoins and is designed to limit the amount of power used by miners. Proof of History is a little bit different. The idea is to create timestamps that show how much someone held and when they held it. This is to make sure that the data reflected is accurate and people are able to access coins and systems in a fair manner. PoH is built on the same basis as PoS, so the technology that is used can run smoothly.

Proof of History has helped give birth to seven other concepts that Solana says make it different. These are:

With these systems involved, we can see that Solana is at least attempting to come across as different to its rivals. Although the project was founded in 2017, it did not go live until March 2020. At first glance, it might seem unfortunate for the protocol to arrive before the public just as the COVID-19 pandemic was picking up pace in Europe. This was not necessarily the case, as we will see later on.

Solana started to raise funds in 2018 and by July 2019 its originators had generated more than $20m through private sales. Multicoin Capital’s founder, Kyle Samani, speaking at the time, said he believed Solana was “the closest thing” to a world computer blockchain. Samani said:

“Solana has done it differently – and is one of the most compelling layer one platforms we’ve evaluated to date. We’re very proud to lead this round, and we encourage developers everywhere to take a serious look at Solana.”

The network continued its development and, after a Dutch auction on CoinList that raised $1.76m, it went live in March 2020.

It does seem like every protocol needs to have its own cryptocurrency, and Solana is no exception. The network’s own native crypto coin is the solana coin, or SOL. People who serve as validators on the network can earn SOL, which they can then use to pass to nodes within the protocol in exchange for running on-chain programs or validating its output. People can also stake their tokens in order to take part in decisions that will affect the future of Solana. It’s also important to mention that SOL can be purchased on exchanges – you don’t need to act as a validator on the network to get hold of SOL.

At the time of writing, there were 272.6 million SOL in circulation out of a total supply of just more than 494.5 million, according to CoinMarketCap. In terms of distribution, 16.23% went towards an initial seed sale, 12.92% of tokens were dedicated to a founding sale, 12.79% of the coins went to team members and 10.46% of tokens were given to the Solana Foundation. The rest have either been sold or are part of the 45% not yet in circulation. 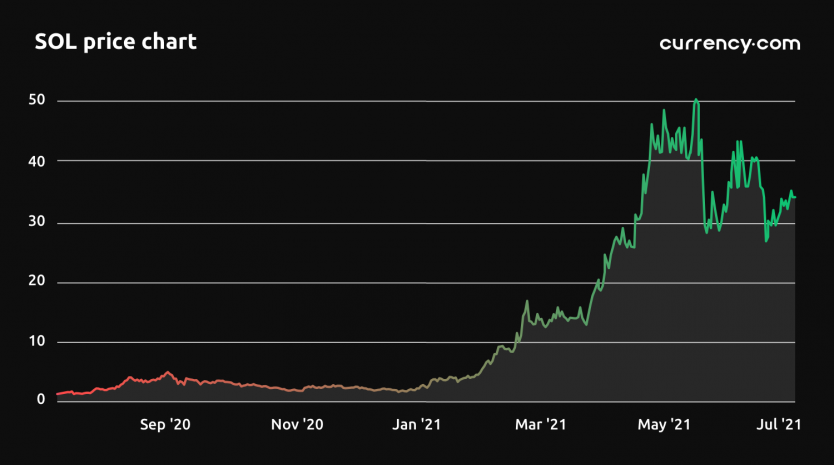 Let’s take a look at the price history of Solana’s SOL. While there is no way that what has happened to the coin can have any impact on the SOL price today, tomorrow, or further down the line, it is still interesting to look at. But remember, past performance is no indicator of future performance. This is not going to be the answer to the question “Is solana a good investment?”, just a little history that might have an impact on an expert’s solana price prediction.

What we do need to remember, though, is this. As we have seen this year, cryptocurrencies can be extremely volatile and things will happen to markets that no one can predict. This means you need to do your own research. Always remember that prices can go down as well as up. And never invest more money than you can afford to lose. Coupled with SOL’s relative newness, it makes sense to be careful.

Is solana a good investment?

Well, it might be, but it might not be. Cryptocurrencies can be incredibly volatile, and we don’t know what the long-term after-effects of the May 2019 boom-and-bust will be. You should make your own decisions and not invest more than you can afford to lose.

How to buy solana

A lot of exchanges list solana, so you can find a reputable one that suits you. It isn’t available on Currency.com yet but when it is, we will let you know. The same goes if you want to know how to exchange solana, too.

OMG coin price prediction: Will it go up?

WINkLink price prediction: What’s next for WIN?
The material provided on this website is for information purposes only and should not be regarded as investment research or investment advice. Any opinion that may be provided on this page is a subjective point of view of the author and does not constitute a recommendation by Currency Com or its partners. We do not make any endorsements or warranty on the accuracy or completeness of the information that is provided on this page. By relying on the information on this page, you acknowledge that you are acting knowingly and independently and that you accept all the risks involved.
Cryptocurrency
АWin-Win
referral programme
Learn more